by Alex Navarro on June 26, 2013
Share:TwitterFacebookReddit

The Merc with the Mouth is accurately realized in this otherwise clunky action game, though that might be more curse than blessing.

I can't think of a Marvel Comics character more immediately polarizing than Deadpool. You either love him for his highly sarcastic, psychotic, fourth-wall-breaking antics, or you can't stand him for the very same reasons. That isn't to suggest there isn't room for nuance with the character. Though at times he's been presented as little more than a attention deficient 12-year-old boy in an adult murderer's body, there have been cases where the character has been presented as a bit more than a simple collection of crass one-liners and hit-or-miss slapstick gags.

High Moon Studios' Deadpool is not one of those cases. This is the puerile Deadpool we've seen time and time again, a motor-mouthed maniac who acts like he might explode if he stopped talking for even a second. Plunked down in his very own third-person action game, Deadpool acts as a sort-of-parody of third-person action games, with its hero regularly commenting on various video game tropes, his displeasure with High Moon's script, and even you, the player, when you aren't performing to his expectations. There's nothing inherently wrong with this concept, and handled with a bit more care and craft, Deadpool could have been an enjoyably ludicrous romp. Instead, Deadpool's various technical problems, coupled with a script that can't get out of its own way, sour what little enjoyment there is to be had.

Deadpool opens with so much fourth-wall breaking dialogue that you'll be forgiven if you're utterly exhausted with it before it even hits the 30-minute mark. Deadpool explains that he has been given his own video game, and he's pretty excited about this. He talks about this a lot, because that's what Deadpool does. Nolan North, who has voiced the character in other Marvel games, goes for a kind of scenery-devouring mania throughout the game as he voices Deadpool, the dual voices in his head, and even Nolan North as himself. It's a performance that will delight those who adore Deadpool for his most addled dialogue and flagrant sexual jokes, and completely alienate anyone who isn't totally on board with having an ADHD-fueled psycho constantly screaming half-funny lines whether they belong there or not. It's a terrific performance of a nearly intolerable character.

Understand, I don't hate Deadpool as a character. There have been multiple comic storylines I've quite enjoyed his presence in. But the versions of Deadpool I tend to enjoy are the ones that dial back his absurdity a notch or two from the shrieking nonsense this game so gleefully wraps itself in. Which isn't to say there aren't funny bits in Deadpool, but none of them really hit until later in the game, when the story relaxes into a bit more of a traditional progression and lets the level designs do the gag work, rather than making North beg for laughs by screaming the words "chimichanga" and "fuck" strictly for their presumed hilariousness. An early bit featuring X-Force leader Cable, and an extended sequence featuring Deadpool's on-again/off-again love interest Death are of particular note, though these moments of goofy inspiration seem almost alien compared with the rampant idiocy and braindead gameplay throughout the rest of the game.

I think I might have been able to stomach some of the lousier comedy moments a bit more if Deadpool played better. Unfortunately, this game is all over the place. Unsurprisingly, Deadpool's primary mechanic involves wanton murder--he is an assassin, after all. You'll start out with his trusty swords and a pair of pistols, and over time you'll be able to upgrade those weapons, as well as add more stuff (shotguns, sais, giant hammers, and so on). Yet while there is some variety to the weaponry you're given, the core fighting mechanics are hopelessly dull. Most battles are just protracted arena fights, with scads of enemies blindly running at you in place of any kind of thoughtful challenge.

There's nothing inherently wrong with the occasional brainless kill-'em-up, but Deadpool's clunky controls do it no favors. Basic combat is fine, if a bit unwieldy when trying to fight off groups of larger, more attack-heavy enemies. The camera tends to box you in if you're anywhere other than the most open space the game is capable of giving you, meaning you'll find yourself trying to dodge and teleport around just in the hopes of staying out of a bad guy's way, usually only to find yourself getting blasted from another enemy somewhere entirely off-screen. The platforming sequences are markedly worse, marred by a woefully imprecise jump that results in a lot of missed ledges, and the occasional bout of getting stuck in the scenery.

That last bit happened to me a couple of times, and each time I had to reset to the last checkpoint. That's not even the most obvious technical issue the game suffers from, either. Certain boss fights refused to trigger; various enemies would often stand perfectly still, frozen in some half-animated pose while I pumped bullets into them sans resistance; at least two cutscenes simply cut off part of the way through without any button pressing on my part; and dialogue has a terrible tendency to cut itself off. That last part is especially bad during gameplay, where story dialogue and in-action one-liners will essentially overlap and obliterate whatever element of comic timing there may have been.

Combine those problems with the game's generally chuggy, unattractive visuals, generic-as-hell soundtrack, painfully obnoxious late-game difficulty spike, and breezily short campaign (I beat most of it in a single afternoon), and you've got yourself a game that really doesn't offer much to anyone, outside of the most dedicated fans of the Merc with the Mouth. While I can usually get behind forgiving some problems in the face of quality fan service, Deadpool's fan service is highly specific to those who want the character taken to the most hyperactive extremes imaginable. Maybe that particular subset of fans will be able to look past the game's issues more easily, but anyone else will likely find Deadpool intensely grating and largely frustrating in equal measure. 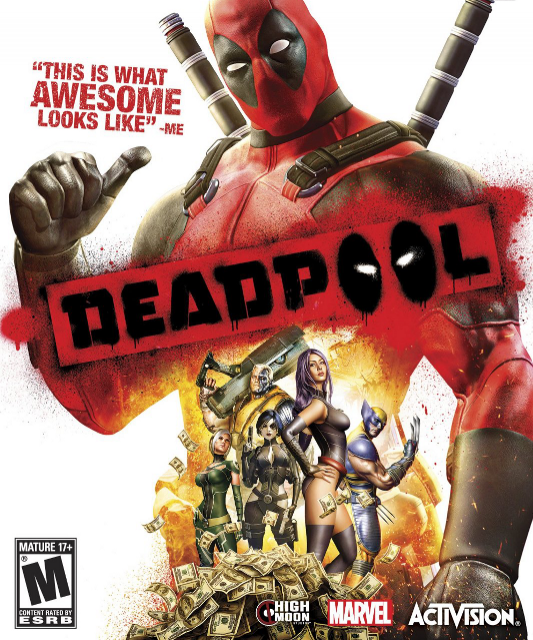