by Jeff Gerstmann on August 23, 2011
Share:TwitterFacebookReddit

The world of Deus Ex: Human Revolution is absolutely worth seeing, and that trumps any of the little issues that pop up along the way.

Deus Ex: Human Revolution feels like the sort of cyberpunk story that no one writes anymore. Why? Probably because this game is set up as a prequel to the original Deus Ex, which was released back in 2000. That means the game is set in a world that was conceived before the Internet became quite as crazy it is today, before our society's conspiracy theories got a lot deeper than basic boogeymen like "the Illuminati" and "Majestic-12." It's a world where a Chinese biotech firm still makes sense as an evil organization. And Human Revolution is set at an extremely interesting time in this world's development, as augmented humans and "normal" people start to clash along lines both class-based and philosophical. It's an exciting world with a tale that's worth hearing, even if some parts of the performance and gameplay don't hit the same high bar as the others.

In Human Revolution, you play as Adam Jensen, an ex-SWAT cop who now works in corporate security for a biotech company called Sarif Industries. Sarif is one of the companies leading the charge into human augmentations--implants that can grant their hosts all sorts of superhuman abilities--and it's preparing to send a team of its best scientists to Washington to reveal some game-changing technology when the company is attacked by a crew of augmented soldiers that wants to eradicate all traces of the team and their research before it can be revealed. Jensen barely survives the attack and is reconstructed using a ton of augmented parts, turning him into precisely the type of RoboCop that Sarif needs to track down the entities responsible for blowing up all that research. It doesn't take long to realize that the conspiracy behind the attack goes deep and requires a bit of globetrotting, taking you from your starting point in Detroit to Shanghai, Montreal, and other points of interest.

The way the world is set up and how the story unfolds is the best part about Human Revolution. Positioning itself around the rise of widespread human augmentation gives the story some moral and ethical weight on the subject of transhumanism, which makes for a fantastic backdrop for the rest of the game. That said, you don't necessarily have a ton of moral sway over the proceedings. You can shake people down for rewards on your side missions and take on some missions that aren't quite as noble as your main goal, but it's not really a "good ending" or "evil ending" sort of game. The choices you make do have some impact, though, most notably on how much information you'll know about what's really going on around you. Between dialogue trees that let you grill various people in different ways and a ton of email to read on pocket secretaries, hacked computers, and so on, there are plenty of things to read and hear about this world of the future. If you're the sort of person that loves to dig into a game's fiction and read every little thing you can, you'll really enjoy this aspect of the game. All told, these things paint a reasonably clear picture about both the important events that are depicted in the game as well as flavor text about the world at large.

Your access to information is limited by how you choose to spend upgrade points as you earn them. For example, you can't even attempt to hack higher-level terminals unless you spend a handful of points in hacking. You can't get any assistance in your conversations unless you spend a couple of points to activate a personality meter that lets you figure out what sort of person you're talking to and emit pheromones that help you influence the conversation. This type of conversation doesn't happen all that often, though, and most of your discussions will be fairly straightforward. Unless you're mindlessly rushing through everything and skipping side missions, you'll earn enough points over the course of the game to invest in just about any upgrade you find remotely interesting, from recoil reduction to super lungs that let you breathe normally in rooms filled with toxic gas. Some of these abilities allow you to take alternate paths to your objectives. For example, being able to lift heavy vending machines will often let you get to the ventilation ducts hidden behind them. Being able to fall any distance without taking damage lets you drop down deep shafts instead of taking the long way around. And turning invisible with your cloaking system, though limited by your energy reserves, lets you waltz right past security cameras, turrets, and hapless guards. There are also plenty of upgrades that are less essential, but still useful, like aiming upgrades that reduce reticle growth, inventory upgrades, and skin upgrades that make you more resilient. In short, the upgrade system gives you plenty of choices, but there are some crucial ones that you'll probably want to enable earlier rather than later.

Some of those upgrades mitigate the handful of issues that get in Deus Ex's way. The shooting and enemy AI makes a lot of the action flat, with plenty of largely unsatisfying weapons that require you to pump most enemies full of lead. Speaking of lead, it's surprisingly limited, inviting you to spend too much time fiddling with your inventory and filling up your limited inventory space with too many bulky guns, just in case you find more ammo for that particular weapon. The enemies are pretty boneheaded by cover-based shooter standards, and their main tactic when not hiding behind cover themselves is to slowly step back and forth while constantly shooting at where they think you're currently hiding. They also, inexplicably, refuse to shoot through breakable glass in some cases, resulting in situations where you're staring at a room of enemies who activate and step back and forth like they're intending to gun you down, but never open fire. And as soon as you take the initiative and send a bullet of your own through that window, breaking it completely, they all open fire. That's just stupid.

A stealthy approach ends up being a bit more satisfying, if only because not alerting the enemies and activating them prevents you from seeing their "tactics." You can execute non-lethal takedowns to subdue enemies, and then drag the bodies away before any patrolling guards find the bodies. I found a mix of quiet and loud tactics to be the best fit, which felt a little cheap as it exploited that AI a bit, but you can essentially shoot a guy in the head from cover in such a way that no other enemies see or hear where the shot comes from, but they see the body go down. This causes the dopes to march right over to the body and stand over it in disbelief, giving you plenty of time to shoot the second guard in the head, and so on down the line. Piling up nine bodies in a stack like that is pretty funny, though it makes looting their bodies for the four or five bullets they all seem to carry around kind of laborious. If I was more patient, I would have just stocked up on energy replenishing items and used the cloaking device to simply walk past as many of the enemy encounters as possible. That would still leave you with the game's boss fights, however, which aren't especially engaging. The bosses, though usually fairly chatty, don't give you great feedback about if your chosen method of attack is actually doing any real damage.

The presentation end of Deus Ex: Human Revolution has some high-minded ideas that, depending on your platform of choice, might not hold up as well as you'd hope. Artistically, the game looks wonderful. You really get a sense of the state of the world, from run-down slums to shining future towers that rise high above the waste and poverty found below. Augmented humans, with their crazy robot arms and retractable sunglasses that don't connect in the middle look super cool. And on the PC, the technical end of the bargain holds up just as well, provided you've got a machine that can handle it at a good, high resolution. On consoles, the frame rate bogs down pretty frequently. It's not a deal breaker, and it typically happens when you're just running around the city areas, so it doesn't impact the gameplay that much, but it's very noticeable. The voice acting is pretty scattershot, as well. The gruff-voiced Jensen just sounds ridiculous, and plenty of the other main characters also turn in performances that, at best, are poorly accented. But some of the line delivery, especially with minor characters and unnamed city dwellers, gets so stilted in spots that you wonder if anyone bothered to attempt a second take when recording it.

It has its issues, but it's the world, the setting, and the story that make Human Revolution great. These aspects of the game are so solid that I happily waded through the game's low points in search of the next hackable terminal or other flavor-filled bit of dialogue or text. That stuff is so strong that, unless you're an extreme stickler for the above-mentioned problems, you'll more than likely be able to look past the game's weak points as well. 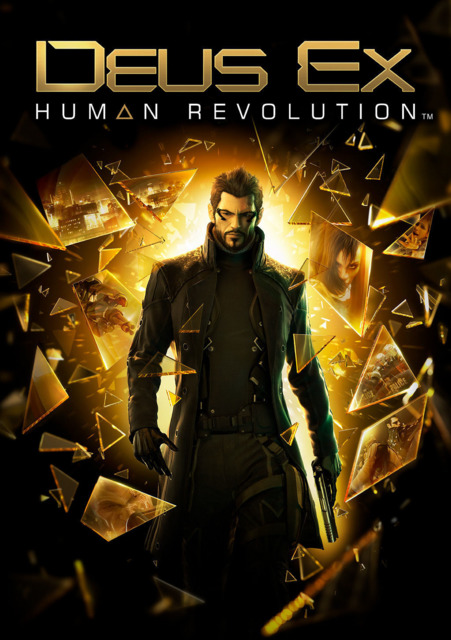