by Drew Scanlon on September 23, 2009
Share:TwitterFacebookReddit

Improvements on the original in every area make Dirt 2 the one to beat when it comes to off-road racing.

The original Dirt did a great job of taking the best of the arcade-style racer and the hardcore sim, and presenting that combination in a slick and easily accessible package. The driving physics were demanding, but not impossible to handle. The graphics and user interface were top-notch. The career mode was varied and well-paced. Dirt 2 picks up where its predecessor left off, upping the ante in every department to create one of the most polished, complete, and fun racing games I've ever played.

From the get-go, Dirt 2 impresses. The first thing you see when you start the game is the unique interface, something that is quickly becoming a hallmark of Codemasters' racing games. Rather than a traditional list-based menu, you're dumped into the fully-rendered interior of your tour RV. Moving the stick brings you to a map of the world spread out on a table, where you can choose an event from one of the game's nine locales. Hit the stick again and you can check out multiplayer, lovingly rendered as a poster-covered wall of your RV. Walking outside the RV drops you into the middle of your pit area on race day with a throng of fans milling about. Here you can choose the car you want for the race and customize it with liveries, horns, and dashboard and mirror toys like hula dolls and fuzzy dice, all of which are earned throughout the course of your career.

Events in the original Dirt were unlocked by placing highly in the races leading up to a particular event. Dirt 2 does away with that in favor of a leveling system. Players get experience points for not just placing well in races, but also for the game's "missions," which keep track of your all-time stats like drift distance, time on two wheels, and so on, and give you XP rewards when you break certain milestones. These generous handouts make the career progression much more forgiving, which is fortunate since winning is tough to do. Despite my familiarity with the original Dirt, and the fact that I was playing in the second-lowest difficulty setting, I won only occasionally. Frankly, I found this to be refreshing; the game became more about having fun in races than coming in first, though for those of a more competitive persuasion, there is definitely room for you.

Dirt 2's career mode is divided into nine distinct locales across the globe. Each area has a variety of events, including Rally (point-to-point timed races), Trailblazer (similar to rally, only with faster cars and straighter tracks), Rally Cross (smaller, motocross-style races, often indoor), Landrush (truck and buggy circuit races), and Raid (like Landrush but point-to-point). Raid events are especially fun, since they are the only events to feature split tracks--a new feature in Dirt 2--where the course forks off, allowing the player to choose one of two routes. This leads to a lot of exciting moments when the tracks merge back together, creating near-misses or spectacular wrecks.

Though Dirt 2 does away with a lot of the more oddball event types of the original (I'm looking at you, Big Rig Hill Climb), it substitutes them with more interesting variants. These special modes range from hitting gates to extend your time in Gatecrasher, and the elimination-style Last Man Standing, where the driver in last place gets eliminated every 20 seconds. Progressing in the career will eventually unlock World Tours for each of the five main events, which yield handsome XP and monetary rewards, and the three X-Games events (Europe, Asia, and America), which include a variety of races and reward you with things like new cars. Multiplayer has been souped-up as well. Whereas the original Dirt's multiplayer was limited to point-to-point races, Dirt 2 includes everything from the full-contact Raid events to the arcade-style Gatecrasher. Multiplayer even has its own XP system (called FP for "Fame Points"), which go toward your purely-for-bragging-rights online rank.

Dirt 2 is fully featured, but where it really shines is in the details. The physics in Dirt 2 are impeccable. When a truck tumbles after taking a hard landing off a jump, it looks and behaves exactly as it should, which is critical if you're behind the truck anticipating its motion across your driving line. The physics are so realistic that the vibration from my idling engine would shake the skirt on my dash-mounted hula doll. Physics also come into play in the water hazards that now dot many of the courses. Driving through water will slow you down (though this can be advantageous if used strategically), and if you're driving from the cockpit view, my preferred perspective, it will obscure your vision for a few crucial seconds. Dirt 2 also features nighttime races, confined to Rally Cross events, which add a whole new dimension to the game. You will have to avoid smashing your headlights on those tight corners if you want to see, and decide if you want to overtake the leader and risk underestimating a dark turn or let him show you the best line through the corners.

The biggest change from the original Dirt comes in the form of flashbacks, borrowed from Codemaster's street racing title GRID. At any point in a single-player race, provided you have not used up your allotted number of flashbacks, you can press the right shoulder button to trigger an instant replay of the last few seconds, complete with VCR controls. Rewind time to before that last wreck, and you've got a second chance to take that turn a little slower. I had my doubts about the implementation of this feature, thinking it would become a crutch and detract from the tension of going for a wreck-free race, but in practice I used it only to recover from debilitating accidents, occurrences that would have required a restart of the whole race in the original Dirt.

That's the thing about Dirt 2: it's just friendlier. The career mode is not as strict, you get XP rewards left and right, and you can undo boneheaded moves. I even found myself using the Vehicle Setup option to fine-tune my car's performance, something that I shied away from in the original Dirt because of how intimidating it was. I'm no gearhead, but after listening to the succinct audio descriptions for things like gear ratios and brake bias, I began tweaking away on the simplified sliders, instantly noticing huge improvements in my car's handing and speed.

The original Dirt was a fantastic game. It had great driving physics, graphics, and a slick presentation, all of which conspired to create one of my favorite racing games of all time. Dirt 2 eclipses its predecessor on every front, and packages it in a modern, accessible package that race fans of any gaming pedigree are sure to enjoy.
Drew Scanlon on Google+
Load Comments 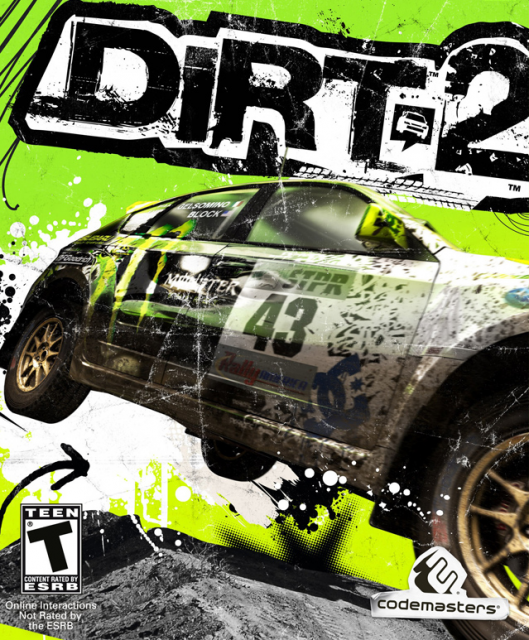