by Ryan Davis on December 8, 2010
Share:TwitterFacebookReddit

Epic Mickey's brief moments of cleverness and knowing affection for obscure Disneyana are mired by clunky, perfunctory platforming and a general lack of followthrough.

Right off the bat, the name Disney Epic Mickey sets some high expectations for this new Mickey Mouse adventure from famed designer Warren Spector. While there has been no shortage of Disney-branded shovelware over the years, there's a history of well-remembered Mickey Mouse games stretching back to the 8-bit days. While Spector's name hasn't been attached to a game in nigh on a decade, he's a designer known for his vision, and Epic Mickey promised a dark, sophisticated Mickey Mouse story aimed at the adult players who grew up with the likes of Castle of Illusion. Nevermind these heightened expectations, though: even on its own merits, Epic Mickey is a platformer that feels about a generation behind, though one with just enough flashes of inspiration to keep you constantly aware of its wasted potential.

As someone with an honest appreciation for the design aesthetics, cultural significance, and nostalgic payload of all things Disneyana, I was personally delighted at the premise of Epic Mickey. While there's a whole world of familiar Disney characters to populate a Mickey Mouse adventure with, Epic Mickey, after a somewhat senselessly convoluted start, traps The Mouse in a painted Wasteland filled with generations of forgotten Disney stars and little-known extras. In a way, the metagame of name-that-obscure-reference is the most fun thing to do in Epic Mickey. Sometimes the game just lays it on real thick, such as with an encounter with a Tron version of Bad Pete perched atop Space Mountain, which I'll admit I'm not immune to the pandering charms of. It also shows a certain capacity of self-awareness, most notably with the location of Mickeyjunk Mountain, a world comprised entirely of discarded Mickey Mouse merchandise. The delicious irony here, of course, is that Epic Mickey will itself one day become consumer detritus, though the game refrains from going that deep down the rabbit hole.

This Wasteland is a shadow version of the bright and familiar Magic Kingdom, even mirroring the basic layout and themed worlds of Disneyland, though its approach to this idea often feels rote in its own way, owing significant inspiration to the muddled palletes and general disdain for 90-degree angles fostered by practitioners of dark whimsy like Tim Burton and American McGee. In another interesting kink, Mickey's position as favored son is held by Oswald the Lucky Rabbit in this shadow realm, which is overrun by horrible inky monsters due specifically to Mickey's own characteristic capriciousness. Mickey is, essentially, the villain at the start of the game, and it's up to the player to redeem Mickey's name.

Interesting ideas abound in Epic Mickey, but they're all sadly in service of gameplay that just doesn't deserve them. While it has some half-baked open-world and role-playing elements, this is a platform-jumping game first and foremost. Specifically, it feels like the kind of mascot-driven platformer that was legion in the N64/PlayStation era, before dual analog sticks were standardized and when most third-person polygonal games struggled valiantly with camera controls. Epic Mickey's unruly camera isn't insurmountable, but having to replay sections due to blind jumps and constant fussing gives you plenty of time to consider just how boilerplate most of the platforming feels, and just how dull vast stretches of this game are. Mickey doesn't just hop--keeping with the game's painterly theme, puzzles and treasure hunts are presented on the regular that require you to employ a magical paintbrush that can shoot either paint or paint thinner. Shoot paint at specific, silhouetted parts of the environment, and they'll fill in and come to life; shoot thinner at the brightly colored spots, and they'll melt away, revealing hidden paths and such. There are a few specific puzzles where you're tasked with starting and stopping mechanized systems with your paintbrush that struck me as kind of clever, but it's mostly too obvious--once you've seen it, you've solved it.

Combat also revolves around the paintbrush, and you can choose to either thin enemies out of existence or paint them until they turn against their brethren. This ties into the thin notion of Mickey's morality and its impact on the world, but like a lot of the support elements in Epic Mickey, it doesn't seem fully formed. There are other mechanics tossed around as well, such as TVs that can be deployed to distract enemies and timepieces that can slow things down, but it all feels bolted-on rather than integrated. At a point, it feels like Epic Mickey is deliberately squandering its gifts. Among the most novel bits in Epic Mickey are the 2D sidescrolling sections that are nicely modeled after classic Mickey Mouse theatrical shorts like Steamboat Willie, The Band Concert, and most apropros, Thru the Mirror. Like the rest of the jumping and double-jumping in Epic Mickey, it's not the most sophisticated stuff, but it's got charm. Problem is, these sequences serve as the portals between various worlds, and Epic Mickey is just rife with fetch quests that have you frequently going back and forth between worlds, forcing you to play through these sequences every time--that means coming and going--and it's a choice that strips away the charm like paint thinner.

The real tragedy with Epic Mickey is that every last part of it could, and arguably, should, have been totally amazing, but it so consistently falls short of that potential. The Disney enthusiast in me got a certain charge out of the experience, at least for a while, but as a game, it's pretty far from a masterpiece.
Load Comments 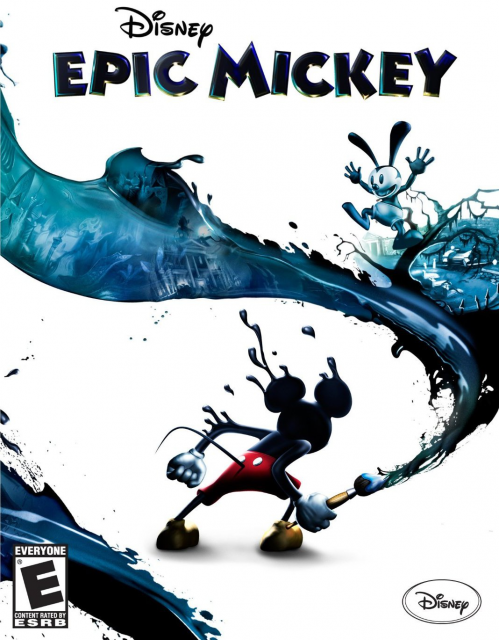