by Matt Rorie on November 18, 2014
Share:TwitterFacebookReddit

Whether you wish to take on world-destroying madmen or simply wander around collecting herbs, Dragon Age: Inquisition is guaranteed to include something you'll enjoy doing.

If there’s a recipe for what constitutes a BioWare role-playing game locked up in a vault somewhere in Alberta, it’s clear the creators of Dragon Age: Inquisition consulted it religiously as they crafted this latest mega-long adventure. This is a game that hits all of the notes that are, by now, quite familiar to fans of BioWare games. By the time you get through the many dozens of hours that it’ll take you to complete the main story, you’ll have fought off forces wishing to effectively end the world, explored lush and varied landscapes, crafted and modified a wide variety of weapons and equipment, built up a stronghold that acts as a resting place between quests, made tough choices between mutually exclusive storyline branches, and recruited party members to fight alongside, talk to, and jump in the sack with. There aren’t any truly surprising facets to the experience if you’ve played any of BioWare’s previous RPGs (and if you haven't, it makes for a great jumping-on point), but if that’s the worst criticism you can level at a game as well-made and enjoyable as this one, then it’s clear its developers have done something right.

Inquisition also feels like a direct response to the many, many criticisms that were thrown at Dragon Age 2. Whereas that game’s story focused on what felt like petty political bickering between the templar and mage factions, Inquisition revs up a high fantasy plot of dragonslaying and dealing with immortal mages wishing to rule over all creation. Dragon Age 2 removed the option for the player to play as an elf or a dwarf; Inquisition restores those choices and throws in the qunari race to boot. The previous game’s action was largely restricted to the smallish city of Kirkwall; Inquisition feels like it contains many times as much land area to explore. It’s perfectly natural to be skittish about returning to the Dragon Age franchise after the uneven mess that was Dragon Age 2, but give BioWare credit for learning from their mistakes and earnestly trying to fix them.

That effort takes a little time to become apparent, though, as Inquisition begins with events that are queasily reminiscent of the end of Dragon Age 2: another massive explosion destroys a building with very important people (including what amounts to the Pope of the world’s major religion) inside of it, which in turn causes the mages and templars of Thedas to enter into open warfare. Your character is the sole survivor of said explosion, and is soon swept up in the creation of an Inquisition whose stated aim is to discover the perpetrator of the attack and their motives. After settling the mage/templar beef, which can blissfully be done within a few hours of starting the game, you find yourself getting your hands dirty in the field, while also attempting to further the aims of the Inquisition’s diplomatic, intelligence, and military arms in a land with enough squabbling factions to make the U.S. Congress seem downright placid in comparison.

The bulk of the game is, of course, spent in combat, where you’ll bring some mixture of warriors, rogues, and mages to bear on the many enemies standing in your way. You control one character a time (with easy and instantaneous switching between party members with a single button press), while the rest of your party is governed by AI. You’re also able to pause and use a tactical view of a fight for more direct control over each member of your party. This can be useful for focus-firing on tough opponents in a chaotic battlefield, but on the default settings (normal difficulty with friendly fire turned off), it rarely felt necessary to pause combat and issue commands directly. Fights look good and feel fun, especially when your party takes on one huge, tough enemy, but can feel scattered and disorganized when a dozen combatants are squaring off in various melees around the map.

For a game relying so heavily on AI-controlled companions, it’s disappointing that you have such a limited set of ways to modify the behavior of your party members when you’re not controlling them directly. You can disable combat skills for your companions to prevent them from being used, or set those skills to a preferred status to make your friends use them more often, and you can control when they use healing potions and how many resources they keep in reserve, but that’s about it. Both of the previous games in the series allowed for conditional tactics, such that when, for example, a character or enemy fell below a certain health threshold, the AI would trigger the character to cast a certain spell in response. The absence of such a system here feels like a step back for the franchise, and while the AI is acceptable enough on the normal difficulty, it’s likely that players looking for more of a challenge will wind up spending a lot of time micromanaging and babysitting their companions.

That theme of “competent but not excellent” extends to the actual personalities of your companions. Their individual quests are often entertaining, but beyond that they feel like a rather withdrawn group of fantasy archetypes rather than real people, without a truly memorable Wrex or Minsc or HK-47 to provide moments that you’ll fondly recall well after you finish the game, although the immature rogue Sera comes close. As if in tacit acknowledgement of this, a notable character from the first two games pops up midway through the adventure, but even their appearance is muted by your inability to actually add them to your adventuring party.

There’s a ton of stuff to do here beyond simply charging through the main storyline, and even that feels like an understatement. I spent more time on Inquisition's optional side content alone than I have in almost any other whole game this year. More than a few of the game’s dozen or so large zones might be left entirely unvisited by the time you complete the game, unless you make it a point to venture out and explore them. The quality of that side content is somewhat variable, however. For every well-written quest that one of your party members sends you on, complete with cutscenes and real choices to make, there are half a dozen rote missions of the “go to location X and perform action Y to receive reward Z” school that feel much less satisfying. They serve largely as excuses to explore the massive world and get into a bunch of fights, but it's difficult to carp too much about that, considering that those actions are both quite enjoyable even after spending 50 or more hours in the game.

The massive amount of optional content might also contribute to making combat seem a bit more trifling than feels appropriate, though. If you decide to take a break from saving the world in favor of wandering out and taking on side quests, it’s fairly easy to earn enough experience to make your party overwhelmingly powerful by the time you head back to chase down the primary villain. I spent most of my first 20 hours or so simply running around helping villagers and looting hillside caves, and by the time I crept back into the main plot, I had so outleveled the content that I rarely even took any damage to my sword-and-shield fighter in many of the fights that I faced. Some massaging of difficulty levels might be required to retain a sense of challenge as you bounce between main and side quests.

Inquisition also features a combat-heavy, story-free multiplayer mode that sees four players teaming up to clear out dungeons to earn experience and gold, which in turn leads to better gear and more abilities. It’s a stripped-down version of the single-player combat system (with your progress in multiplayer being entirely divorced from your achievements in the main adventure), and it isn't particularly compelling, but it may serve as a diversion for diehards after exhausting the singleplayer content. Microtransactions are included if you really want to spend real money on virtual gold, but doing so doesn't feel necessary to advance.

That multiplayer mode seems symptomatic of Inquisition’s primary weakness, though. There’s a bit of a kitchen sink mentality at play here: was anyone really clamoring for a repetitive dungeon-crawling multiplayer mode in a Dragon Age game? Or a couple dozen different mounts, none of which seem to let you travel all that much more quickly than simply wandering around on foot, while removing your ability to loot objects you come across? Or multiple zones and corresponding questlines that have no true bearing on the game’s main plot? It feels like poor form to criticize a game with as much content as Inquisition throws at you, but it does seem like far more attention was paid to peripheral matters than was expended on the central storyline, to the detriment of the latter. Bioware's best games manage to incorporate optional content without detracting from the serious business that must be resolved to save the world, but the balance in Inquisition is shifted a bit too far in favor of the mundane over the epic.

I played Inquisition on three different PCs, and it ran well, looked great, and was almost entirely bug-free on all of them. (The framerate in cutscenes dropped noticeably on each of them, though.) The PC version of the game features a custom UI that allows for quicker access to your character’s skills, and also throws in features like quick saving and an autorun button, but there are still a few niggling issues that popped up, such as the lack of a text chat option in multiplayer and the inability to bind commands to mouse buttons. After giving the mouse/keyboard configuration a whirl early on, I wound up using a controller for the rest of my playthrough.

Dragon Age: Inquisition contains a whole lot of legitimately fun content and pairs it with a like amount of superfluous busywork, but even the optional quests wind up being enjoyable thanks to the quality of the presentation and its satisfying combat mechanics. It’s a welcome return to form for a franchise that felt adrift after Dragon Age 2, and is easily recommendable to RPG fans who have a spare few weeks to dedicate to a single game. 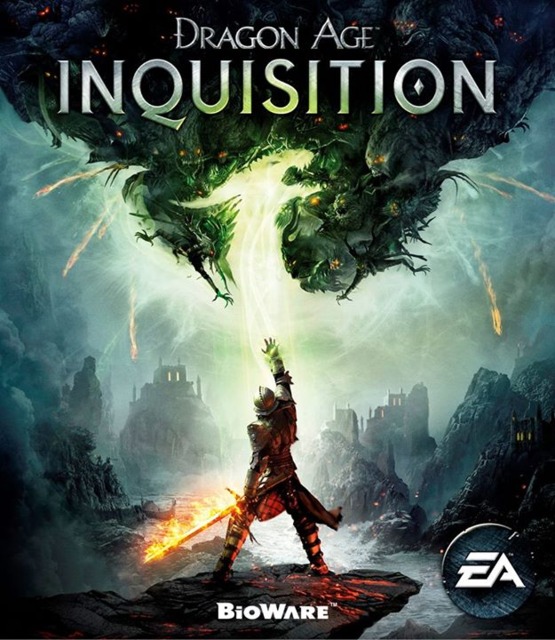