by Brad Shoemaker on October 25, 2010
Share:TwitterFacebookReddit


Fable has always seemed to me like the weirdo, off-kilter Xbox counterpart to Zelda, a staple fantasy adventure franchise that trades reverence for flatulence and gleefully turns the sword-and-sorcery milieu right upside down. That willingness to buck the oh-so-serious tropes of the genre is what made the first two Fable games so endearing, and the new third game in the series has that same absurd charm running all through it. Absurdity may have also governed some of the design elements that shape the way Fable III plays and progresses, though. Too frequently it feels like the game mechanics do their best to obscure, rather than enhance, what Fable does best.

This sequel has a loose connection to Fable II, with you in the male or female role as the younger offspring of the heroic monarch you played in the last game. It seems your older brother and the current king Logan is a bit of a despotic jerk who's ruling Albion with an iron fist. The people are eager for a hero to lead a rebellion against him, and naturally it only takes one injustice at the hands of your brother before you are that hero, on the lam and gathering followers to take the crown for yourself and (if you choose) rule with benevolence. Lionhead did a good job of evolving Albion's look and feel, giving you the sense that a few decades have passed in which the rapid rise of industry has sullied the land and stratified the population into a mass of working poor and the wealthy elites who exploit them. The opening cinematic's tour around the belching smokestacks and through the polluted back alleys of Bowerstone is enough to convince you that Albion is a kingdom that could use some saving. It's a good way to kick off your quest and give you a reason to see it through.

The drive to bring the kingdom's varying cultures to your cause provides a good impetus to move you from area to area, and most of the story quests focus squarely on that goal. Everything about the way Fable plays at its core is still sound here. It's still got that basic but satisfying three-part, one-button combat, with melee, ranged, and magic each on its own button. And on the margins, Fable III also has plenty of loose, optional side questing that lets you build up your character through new weapons, clothing, relationships with other citizens, and chances to tweak your moral alignment toward good or evil. If you want to take a break from your revolution to participate in a tabletop roleplaying game gone absurdly awry, or father a bunch illegitimate children, or bet on chicken races, or become a wealthy business magnate, or hunt down dozens of awfully foul-mouthed garden gnomes, you can do those things and a lot of delightfully silly other things too.

The side quests are your chance to witness lots of ridiculous and often riotous little storylines playing out here and there. Fable doesn't get enough credit for being funny, or at least, it's not a franchise that's thought of first as a vehicle for comedy. But this game is downright hilarious, and it's at least clever and expertly written when it's not outwardly trying to make you laugh. And the game's wry British sense of humor is brilliantly enhanced by the celebrity voice cast, most of whom I didn't even know about till I watched the credits. At the time I just remember thinking, repeatedly, that the writing and voice acting sure were fantastic, maybe some of the best in the business.

Those are the good parts of Fable, which are again in effect in Fable III. But it's in navigating all those quests and trying to keep up with all the items you're picking up and people you're meeting and real estate you're buying and weapons you're upgrading and... well, it's a lot to take in, and Fable III doesn't give you a good, clear pathway to accessing and managing those things. The last game certainly had its issues with menu presentation and so on, but Lionhead's solution here wasn't to improve those menus to but rather toss them out completely. Now, in order to change your clothing or weapons, or look at the map, or check your quest log--to do anything managerial at all, really--your character has to bodily teleport to a small hub level and then physically run up to the wall in your armory to change your weapons out, or over to the map table to view the world map. It's nice to get a visual representation of things like new clothing before you use them, but this intermediate step between exploring the world and accessing important information starts to make the game feel ponderous after a while.

Streamlining and simplifying the user interface is a noble goal, but I really feel like Lionhead threw the baby out with the bathwater here. In-game, you no longer see helpful things like a life bar, so you never know exactly how close to death you are, nor how many health potions you have remaining (unless you're in battle), so you don't know when you need to go buy more. But you do see an enormous reminder containing your current quest's name and description that takes up at least the top fifth of the screen. That thing never seems to go away when you want it to. And while the game will occasionally pop up D-pad shortcuts to things like the map, they only appear when some sort of internal logic deems them necessary. Why shouldn't up on the D-pad always take you to the map, instead of only when the game thinks you might want to see the map? It's an unfriendly and downright baffling way to handle the interface, which should just quickly lead you to basic, important game functions instead of only dangling them in front of you from time to time.

The game has some other rough spots of a mostly technical nature. I had quests randomly disappear from my quest log on occasion, and the light-up breadcrumb trail that guides you to the quest locations in the game world would always disappear along with them. Since Fable III's in-game map still isn't the most functional, any gap in your navigational tools really sticks out. I also hit one nearly game-breaking issue deep into the game where an enemy fell through the floor and the game wouldn't progress the storyline until I killed that enemy. Reloading the game took me right back to that exact same state, which made me think I was going to have to start the game over at the beginning and throw out almost 20 hours of progress. I eventually figured out a way to find the enemy's location by the sounds it was making, and used area-of-effect magic to kill it, but for about 10 minutes there I sort of felt like I was going to be sick.

I was willing to forgive all those interface issues as long as I was enjoying the adventure on offer in Fable III, which I really was for most of the game. But there's a significant shift in the storyline and, consequently, the game mechanics in the last few hours of the game, once your revolution succeeds and you take the throne, that alters the tone and the pacing of what you're doing. You're still getting to hack up hobbes and hollow men, and completing quests in exotic lands, but there's an extra layer of responsibility on top of that which feels like it introduces more urgency into the Fable experience than I'm comfortable with. And when I finally felt like I had a handle on the new stuff that was going on, I got dragged without warning past the point of no return, into a lackluster endgame scenario before I'd had time to finish up all the business I knew I wanted to take care of. Not finishing those few tasks significantly affected the way my ending turned out, and left my version of Albion in such a state that, despite having a stack of side quests and achievements to finish up, I kind of don't ever want to visit it again. I know this sounds like the world's vaguest complaint (getting more specific would require me to detail most of the story's major plot points), but the way the game wrapped up in the last few hours really lessened my experience with the package as a whole.

Fable III does a great job reprising the elements you expect from the Fable series. The colorful, sprawling lands to explore, the great flexibility in how you develop your character and make your way through the world, the wonderfully dry sense of humor, and the cockeyed view of fantasy tradition are all here and accounted for. It's just the rough trimming around the edges, the ways that those grand elements could have been better realized and better conveyed to the player, that make this as frustrating a game as it is lovable.
Brad Shoemaker on Google+
Load Comments 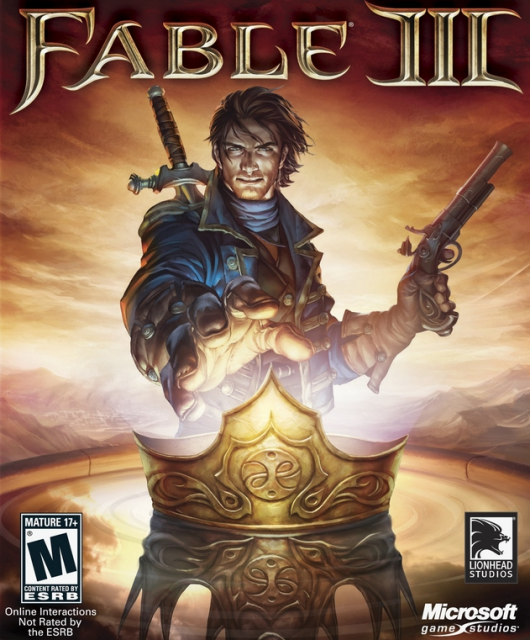