by Jeff Gerstmann on April 16, 2012
Share:TwitterFacebookReddit

The weird, wonderful world of Fez operates on multiple levels, but only the people who are willing to dig all the way down to its core will come away satisfied.

With Fez, you get as much out of it as you're willing to put in. That is, the game works on multiple layers. On the surface, it's a breezy little platformer that you should be able to cruise through without much difficulty. After all, there are no real enemies, and very few spots along the main path through the game that require actual skill with a controller to complete. As a result, you're given a flashy little ending and the ability to go back into the world and find anything you may have missed. But if you just collect 32 cubes and "finish" the game, you're barely seeing what Fez actually has to offer. And the puzzles you must solve to get everything else are occasionally inventive, often maddening, and always interesting.

Fez is short on story and long on atmosphere. You wake up as Gomez, a 2D boy in a 2D world. After being granted a fez of your own, though, you gain the ability to rotate the world by 90-degrees, letting you use perspective shifts to see the world from four different angles. Typically, this means you'll climb as high as you can, see a platform that seems to be out of reach, and rotate the world until you find an orientation that closes the gap between where you are and where you want to go. It's stylish, but there isn't really anything too tricky about navigating the world. So if you're looking at Fez in hopes of finding a perspectively-minded puzzle game along the lines of Crush, you're probably going to be disappointed. It'll probably only take a few hours to rotate the world around and collect the minimum number of cubes required to complete the game that way.

It's the rest of Fez that makes it something special. As you dig beneath the faux-retro aesthetic, Fez reveals all sorts of hidden elements. It forces you to pay attention to everything, from the paintings in a room to the scribblings left behind on classroom chalk boards. It never comes right out and says what's what, but as you explore the world and start to recognize what you're actually seeing around you, it creates a set of magical moments. On the downside, once you've made this realization (or, more likely, once you've looked up the main secrets), the game quickly devolves into using your map to figure out which areas still have secrets in them, heading there, and quickly collecting yet another anti-cube, which is the game's main hidden item. Between regular cubes and anti-cubes, you'll find 64 cubes in the world of Fez. And to open the game's final door, you'll need them all. You'll also have to finish the game once to unlock an additional ability that's absolutely necessary if you're looking for secrets. While the uncovering of keys to the game's secrets and learning how to interpret the world around you leads to some astoundingly revelatory moments, the way the game boils down to doing the same sort of task over and over again to collect most of the hidden items is disappointing.

Exploring the world of Fez is a wonder on its own. Despite its deliberately simple look, the world has a collection of vastly different areas to explore, and I was continually surprised by the number of different-looking areas to uncover. What starts as a collection of villages in various states, each connected by a sort of core or hub quickly expands to reveal sewer systems that glow with the monochromatic flair of an original Game Boy, an observatory, an enormous bell tower, an equally huge clock, forests, caves, and plenty of even more surprising areas that play around with deliberate glitches and other great-looking effects. There are tons of things to simply see and study in Fez. They all warrant close inspection, too, both because they're worth examining for their artistic merit and because finding the hidden secrets that lie beneath Fez's outer layer requires you to go in with sharp eyes and an even sharper mind.

At times it seems like every single piece of Fez's world is deliberately placed in order to teach you something about the world. Picking up what Fez is putting down is something that many players may completely fail to do, and those players are likely to come away from the game feeling like it's an easy, dumb adventure with zero challenge. Consider this your chance to lord superiority over those people, whether you figure it all out on your own (which seems pretty unlikely for most folks) or consult message boards and FAQs in search of pointers in the right direction.

While parts of Fez deal in cute, deliberate video game glitches, these are undercut by several very real issues. On multiple occasions, I've had the game simply quit back to the Xbox 360 dashboard without warning. Thankfully, the game auto-saves quite regularly, so I never lost much progress. It sounds like some other players are experiencing more dramatic problems, such as loops that prevent their save game from loading, and so on. Additionally, the game's frame rate often bogs down when you first load into an area, causing stuttery transitions from one zone to another as well as slowdown once you get to where you're going. Some of these problems are more crippling than others, but it all combines to make Fez feel like a product in need of some further clean-up.

Fez really caught me by surprise. On my initial playthrough, the game was downright maddening because it was impossible to know if I should be paying attention to all the symbols and items around the world as I hunted around for enough cubes to finish the game. Then, as I started to figure out what it was actually asking me to do, I started dreading the idea of busting out graph paper and attempting to piece the mysteries together for myself. I ended up taking the coward's way out by visiting a message board or two to get me pointed in the right direction, but once I was over that initial hump, traversing the world and decoding the "real" world of Fez was intensely gratifying. And going to visit the puzzles that I allowed a message board to solve for me to see how the game's developers intend for you to discover this information is unlike anything you've seen in recent history. It's just the right mixture of charm and insanity. Even if you end up letting a collective of Internet sleuths guide you by the hand as you work your way through the game's cubes, anti-cubes, artifacts, and other items, Fez still somehow manages to be worth seeing, if only to marvel at how much weird work went into making what we all thought was just a retro-styled perspective-shifting puzzle game into something decidedly more mind-bending. 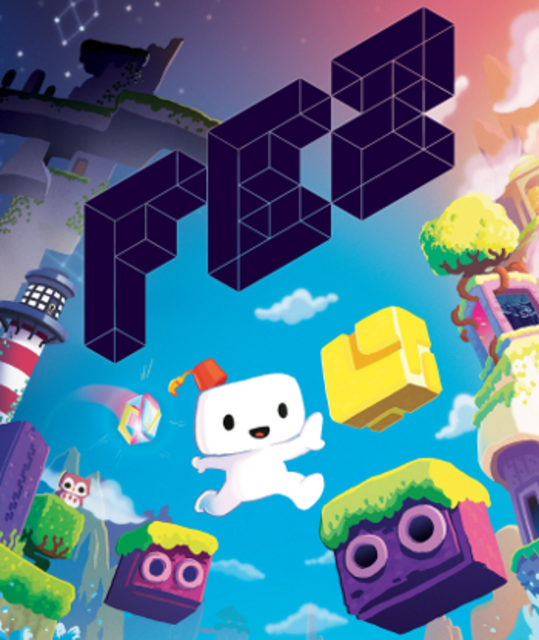