What It Is: Firewatch

Chris Remo and Jake Rodkin enlighten us with the answer to that question of questions.

by Alex Navarro on February 9, 2016
Share:TwitterFacebookReddit

Henry is a coward. Not one of those sniveling, cartoonish cowards you frequently see portrayed as villains in various entertainments, but an average one. The kind of mundane, run-of-the-mill coward just about anyone could find themselves becoming if the right (wrong) combination of circumstances happened to befall them. The circumstances that befall Henry would test anyone's resolve, and as much as we'd all like to think we'd persevere in the face of such a test, the greater likelihood is that many of us would do as Henry does: we would flee. We would look for the furthest place from the source of our guilt we could find, and we would hole ourselves up there until someone or something pushed us back toward civilization.

In Henry's case, that place is the Wyoming wilderness during a particularly dry summer in the 1980s. He's taken a temporary job as a lookout for the park service, tasked with keeping an eye out for signs of wildfires (among at least a dozen other unadvertised responsibilities) in almost total isolation. His only contact is Delilah, a coordinator of sorts for the various lookouts in the park, who he only speaks to over a radio. In theory, this should be the perfect place for an ashamed man to decouple himself from the eyes of the world and wallow in his own self-pity, but almost immediately after his arrival, things begin to go terribly, strangely wrong.

This is the premise of Campo Santo's Firewatch, an excellent mystery adventure game in the vein of Fullbright's Gone Home and Telltale's various licensed properties. Presented entirely from the first-person perspective, Firewatch puts players into the squat and stressed body of Henry as his shame-filled sojourn turns potentially hazardous. Via light interactive mechanics, familiar conversational choices, and spectacular production design, Firewatch unspools a taut and fascinating mystery that remains gripping for the vast majority of its four-to-five-hour runtime.

In order to talk about what makes that mystery gripping, and how it occasionally falters, I will have to talk about Firewatch's story, at least in broad terms. If you have any interest in Firewatch, and want to remain purely unspoiled before playing it, take this as a recommendation that you do so. Stop reading here, and go play it. For anyone looking for a bit more detail on what goes on in Firewatch, read on.

Firewatch's greatest strengths are its attempts to make the player feel completely cut-off from the world. Given that the game takes place before the proliferation of consumer-grade GPS, you have only a map and compass to guide you, which you must manually bring up and zoom in on. The little icon denoting your place on this map is Firewatch's sole major concession to video game convention. There's no UI to speak of, no directional arrow showing where your next objective is, no meters or other screen clutter to distract you from the environment you're tasked with exploring. That environment is largely wilderness, albeit a highly stylized (and surprisingly linear) version of it. If you've ever seen those classic WPA National Park posters, Firewatch's environment feels drawn straight out of them, painted with beautiful, bright pastels, and lit by a sun that at once feels realistic and otherworldly. Though opportunities for exploration are limited in Firewatch--the story shuffles you along a mostly set path--it's an environment you'll nonetheless want to poke around as much as possible, especially once you acquire a little point-and-shoot camera not too long into the game.

Yet at the same time, the park offers up a haunting quality. Moments carefully placed throughout the story feed a growing sensation of deep paranoia in the player, giving you the sense that the wide open spaces you're trudging through could produce peril at any given moment. It helps that Henry feels like a physical presence in the world. You see his stubby hands as he fumbles with the radio and other objects, hear him huffing and puffing as he climbs ropes and jumps down from ledges. There's a sense that there is a real person here, and not a particularly powerful or even capable one, leading to a perpetual sensation of vulnerability. The game's minimalist audio also aids this sensation, underscoring the tension with rustles of trees, snaps of branches, and your own footsteps, with only periodic invasions by a moody, low-key soundtrack.

Of course, you aren't completely cut-off. Delilah is often, if not always there, a simple radio call away. Delilah's presence is imperative to Firewatch's story. At the outset, she exists primarily as a mission giver. Over time, she becomes something more nebulous. She exists as both an ally and a possible antagonist. Her statements don't always add up, but often enough they do, so as to keep you wondering. You interact via a walkie talkie you carry around constantly. When a conversation begins, you hold down a button to pull the radio up. This presents you with multiple dialogue options. If you've played any recent dialogue-focused adventures, you know what's happening here. You pick the statement you think your version of Henry would make. There is usually a friendly answer, a less-friendly option, something witty or sarcastic to say, or you can just say nothing at all.

Interestingly, these dialogue choices don't feel like they feed into any greater notion of player choice affecting the story. Occasionally an untoward response can lead Delilah to cut you off for a time, but that only lasts until the next big story beat. There's no big tally at the end of Firewatch that shows how many players chose one Big Player Choice versus another. At no point does the game indicate that Delilah will remember that.

Instead, Firewatch's dialogue seems largely constructed to help the player shape their vision of Henry. Nowhere is this more apparent than at the beginning of the game, which sculpts Henry's backstory through a series of text-based prompts. The core beats of that backstory will always be the same, but how Henry chooses to react to those beats is left to the player. That's true of the rest of the game too. If you've played any Telltale adventure, especially the excellent first season of The Walking Dead (which Campo Santo's Jake Rodkin and Sean Vanaman worked on), this makes sense. There is a story here that is going to be told no matter what. You are given a degree of wiggle room to affect that story, but nothing more than that. There aren't wildly varying endings to experience, no major branching paths beyond the overgrown trails of the park. And that's OK.

It's OK because that story is mostly excellent. The relationship between Henry and Delilah is well-built, and each character is given ample room to establish nuance beyond the player's initial impression of them. The respective performances from Rich Sommer and Cissy Jones are a huge factor in that. Sommer in particular nails the schlubby, awkward notes of Henry perfectly. The only knock is that dialogue occasionally leans a touch hard on quippy back-and-forth between the pair, the kind of writerly cleverness that sounds great as rhythmic dialogue, but doesn't necessarily feel true to how these characters, as distinctly human as they seem, might talk.

Firewatch also occasionally betrays its own tension, sometimes very much on purpose, sometimes seemingly not. At its peak, Firewatch is reminiscent of the great paranoid thrillers of the '70s and early '80s. As mentioned before, as the mystery unfolds, a series of small, but increasingly stressful events take place that fuel what becomes an almost unbearable feeling of tension. A huge element of that is the environmental design--rarely has a game induced such dread in me through little more than subtle shifts in lighting and color--but the elements of the mystery play a big part as well.

The key thing, and the thing I think a number of players will find themselves hung up on once Firewatch's credits roll, is that the game is ultimately not quite what it indicates itself to be. It offers up numerous red herrings that misdirect the player while building to a smaller, more personal conclusion than the scope of the mystery initially purports.

This is not a bad thing in itself. The way Firewatch pulls its various pieces together, the way it untangles itself in direct parallel to Henry's own guilt-ridden existence, is very nearly masterful. But there are elements of that build-up and payoff that don't completely work. The story is a little too willing to quickly write off certain story threads, and not every piece feels completely, or even satisfyingly, addressed. The conclusion lands with intended effect, but as you start to go back and pore over every scenario the game presents you with, it doesn't all quite add up as well as you might hope.

There are also pacing issues. Firewatch suffers from an opposite problem to another recent outdoor adventure game, Night School Studio's Oxenfree. That game had terrific first and third acts, but felt like it was largely missing a second one. Firewatch rushes a bit through its establishing scenes and aims you toward closure with similar haste. Its middle, which makes up the bulk of the game, is brilliant. Yet it felt like scenes that would have more thoroughly established the evolving nature of Henry and Delilah's relationship early on, and tied up the individual threads of the plot in more organic fashion, were perhaps left on the cutting room floor.

Ultimately, those criticisms do not prevent me from enthusiastically recommending Firewatch. Its occasional stumbles are largely dwarfed in comparison to the things it achieves. Its aesthetic pleasures are obvious even in screenshots, but its true triumph is in its confident storytelling. It is a game assured enough to deal heavily in the familiar tropes of the thriller genre while ensuring that the more personal story of its carefully crafted characters shines through. It is a game willing to take a hard look at the prisons we build around our more shameful transgressions, the isolation we inflict upon ourselves to keep the rest of the world from seeing our failings. It is a game about facing the menace of the external, insurgent elements that violate those self-imposed boundaries, like a creeping fire that suddenly, without warning, burns out of control. It is a game about fucked-up people that feel, genuinely, like fucked-up people. It is a game you should absolutely play. 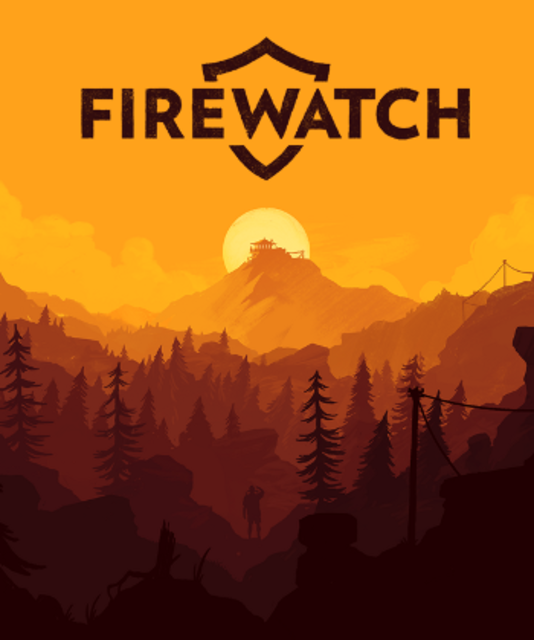