by Jeff Gerstmann on October 14, 2009
Share:TwitterFacebookReddit

Whether you're on the track racing or off the track tuning and designing cars, Forza Motorsport 3 is incredible.


Forza Motorsport 3 is a game for people who love cars not just for their looks, but also for the way they drive. At its core is a satisfying simulation of realistic car handling with all of the tuning bells and whistles that fans of this style of game would expect. But the impressive part is that Forza 3 provides all of this while also finding a way to remain appealing for people who might love cars, but might not have a love for the extreme challenge that a full-on driving simulation entails. With loads of enthralling things to do both on and off the track, Forza Motorsport 3 is like a new blueprint for how racing games like this should work.

Like the previous game in the series, Forza 3 widens its appeal by offering a handful of assists that make keeping your car on the track and pointing in the right direction a bit easier. Most of these are actually standard car features, like traction and stability control, and anti-lock brakes. This time, though, you can also enable an automatic braking assist that will slow into the curves for you. With everything turned on, all you're really doing is feathering the accelerator and pointing the nose of your car at the dynamic driving line, and it practically plays itself. That said, there's no button you can push or slider you can tune to turn Forza 3 into Ridge Racer, Burnout, or Need For Speed. The assists merely make the simulation-styled racing more approachable. Though I started with most of the assists turned on, over time I became more and more comfortable with the handling and slowly turned them off.

There's one more thing in place that attempts to make the driving in Forza more palatable to people who might normally ignore a game like this. At any point, you can hit the back button to rewind the race. It's similar to the flashback feature found in Codemasters' GRID, but here there's no limit to how frequently you rewind the race. Any time you blow a corner and completely destroy your car, you can hit the back button and give it another shot. The only real penalty is that your leaderboard position is lowered below the folks that were able to run a clean race. It sounds like the sort of thing that totally breaks any challenge the game might have, and yes, it certainly makes for a nice cushion when you get too aggressive and screw up. But when I think back to the times in Forza 2 when I raced a long, long endurance race only to lose focus near the end and blow my lead--and how that made me never want to play Forza 2 ever again--rewinding a race doesn't feel like it destroys the experience. Sure, you can undo a wreck, but you'll still have to do all that driving yourself. Even with all of the assists on, it's not going to take that corner for you.

The single-player component of Forza 3 guides you through multiple seasons of racing, each of which lets you go through different groups of races that are designed for different cars and classes. In this season mode, you're always presented with a few different choices to serve as a next step. The choices you're offered depend on the car you're driving and the tracks you've seen, so after you complete a series you're given choices that let you see tracks you haven't seen before, one that lets you keep on racing in your current car, or one that's built for a different car, giving you an excuse to get a new ride. With each series having its own little poster and set of rules, they each take on a little bit of personality of their own.

Though completing seasons is a good, guided way to move through the events, you can also just call up the event list at any time and see every single series the game has to offer. There are 220 different series in the game, and provided you have the appropriate car for the event and enough experience points to enter, you can jump into any race of any series at any time, season be damned. This is great if you want to seek out specific events as an excuse to drive a specific car. And there are a lot of specific cars that you'll probably want to drive over the course of the game.

There are over 400 cars in the game from 53 different manufacturers, bringing together sensible vehicles like the 2009 Honda Fit Sport (which can get up to decent speeds if you pump it full of upgrades), older cars like the '87 Buick Grand National or the '70 Mustang Boss 429, newer production vehicles like the '09 Lexus IS F, supercars like the '09 Bugatti Veyron, and straight-up race cars with names like "1998 Ferrari #30 MOMO Doran Racing F333 SP." You can carefully spend your credits on individual upgrades for each car, or you can skip all that and use the new quick upgrade system, which lets you choose which class you want to put your car into and then figures out what parts you'll need to get there and how much it'll cost.

You can also drive online with up to seven other players. The default matchmaking options are Halo-like in their construction, allowing you to pick specific race type playlists (like drift or circuit) or letting you hit quick match to get matched up in standard races of varying lengths. Once you're in a lobby, you can vote to skip races and select which car you want to drive, like customized rides out of your garage or off-the-lot stock versions of the game's full complement of vehicles. If you're playing with friends, you can jump into private races, which gives you full control over a ton of different options. There's the obvious stuff, like the track or the number of laps, but you can also specify teams, choose different types of scoring, car restrictions, and more. You can also set up drift races, which score you on how well you can whip around turns, rather than your ability to finish first. You can save your own rule variants for later use, which is handy.

Of course, there's way more to Forza 3 than just racing. Forza 2 allowed players to use primitive shapes to design elaborate vinyls and slap them all over cars. The designs got absolutely crazy, and players started auctioning off well-designed cars via an in-game auction house. Forza 3 has all of that stuff, but it's been further fleshed out to allow for player-run storefronts. Now, rather than simply auctioning off fully designed cars, players can sell groups of vinyls, full car designs, and tuning setups. You can also put up photos or edited videos. If you're skilled with the vinyl tools or tuning, this seems like it could be a good way to stack up in-game credits, which you can then turn around and spend on the game's high-end cars. Just sifting through the design area and seeing what other users have come up with is almost like a game unto itself.

The look and sound of Forza Motorsport 3 is really fantastic. The car models look great and show off a lot of detail, and more importantly, they move well. The game maintains a smooth frame rate throughout. The menus, most of which show off a stark-white design, are clean, easy to understand, and feel like an interactive car brochure. The audio is awesome, with realistic-sounding exhausts and tire squeals. There's a licensed soundtrack in place, as well, which plays Hard-Fi, The Hives, Rise Against, Adam Freeland, Turbonegro, Logistics, and more. The soothing music that plays during the menus is great, but during races, I found that the music repeated a little too frequently. You may want to build a custom soundtrack if you're planning on spending some serious time with Forza 3.

It's extremely easy to lose hours to Forza Motorsport 3 because it does so much great stuff both on and off the track. If you're at all interested in the reality of racing cars, Forza 3 is amazing from every angle.
Jeff Gerstmann on Google+
Load Comments 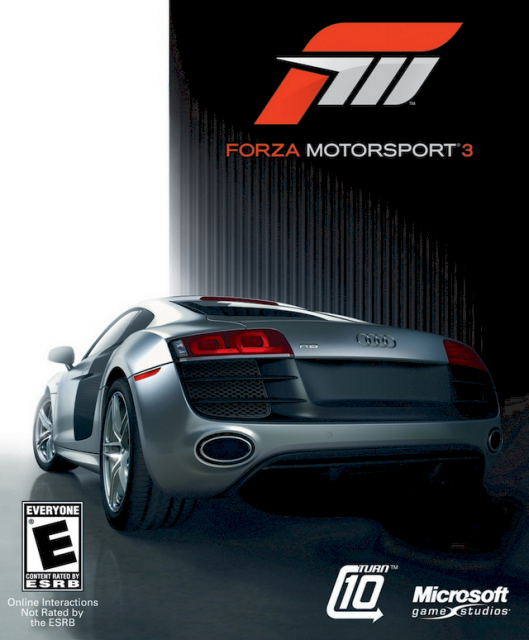