by Jeff Gerstmann on September 15, 2011
Share:TwitterFacebookReddit

Gears of War 3 is a fantastic follow-up that answers important questions about the nature of the Gears universe while backing it all up with an even bigger, better multiplayer suite.

Closure has become something of a rarity in today's video games. Blame it on whatever you want, from the business need to keep popular franchises running until we're all in the grave, to an increasing focus on multiplayer games, but these days it feels like most games set up at least as many questions as they do answers. That's part of what I like about Gears of War 3. It answers questions. It leaves things in a dramatically different place than they were at the start of the game. If this were to be the final game in the Gears franchise, it'd be a satisfying place to leave things... not that I believe for a minute that we'll never see a Gears of War 4 or Gears of War: The New Class or something along those lines. But instead of immediately making you wonder about the next game in the line, Gears 3 seems like it's built to last, with both a surprisingly touching story and a set of multiplayer additions that attempts to address the issues that plagued the previous game.

Gears of War 3 is about damaged goods. While it's expected to see Dominic Santiago's continuing mental breakdown after the loss of his wife in Gears 2, almost every character you can think of is feeling the effects of this longterm war, and the story spends just enough time focusing on the ways that some of the different characters are unravelling to make the game feel like it's about more than just hiding behind boxes and shooting monsters in the face. The game opens with Marcus dreaming about his father, and, as you might expect after the ending of Gears 2, much of this game deals with the revelation that Adam Fenix might not have died all those years ago. But the people in and around Delta Squad aren't the only things breaking down. With the COG effectively disbanded, there's no government left to back up these soldiers, forcing them to scavenge and trade with other survivors in order to continue the fight against two enemies: the battered-but-definitely-not-beaten Locust and the wild, infected Lambent creatures, which in the two years since the conclusion of Gears 2 have continued to mutate into something that now only occasionally resembles their original "irradiated Locust" look. The human forces appear scrappy and divided in Gears of War 3, and it's exciting to watch their campaign unfold.

You can play through the five acts of the Gears campaign in a few different ways. The online co-op option allows up to four players to play simultaneously, and there's a new arcade mode that turns on score tracking, giving you points for kills, assists, and so on. As you earn points, a points multiplier meter fills, giving you an opportunity for higher scores, but if anyone on the team goes down, that meter quickly begins to drain, giving you a real incentive to keep everyone alive. You can also enable mutators that alter the game a bit. Some make it more difficult and give you extra experience points, like one that requires you to active reload every single time. Others make it easier and reduce the XP you'll earn, like one that gives you infinite ammo. Others are just there for kicks, like one that adds a laugh track to the game. They all sound interesting, but you'll have to play for tons and tons of time if you want to unlock them all, which is pretty unfortunate.

The good news is that you can spend that tons of time in just about any mode. That includes the game's versus multiplayer, which offers the same sorts of game types found in Gears 2, so if you want to capture and hold points there's King of the Hill, or you can always go for more straight-up modes, like Team Deathmatch. TDM works with a respawn counter, giving each five-person team 15 respawns to start with. This helps make every death count and keeps matches moving. The game also seems to be attempting to give new players a fighting chance with a new "casual" option that jumps you right into a TDM match. But if you reach a specific skill threshold, this option is locked out, forcing you to go up against the regular Gears players in the standard setting.

This is the part where dudes roll up behind you every 15 seconds and blow you into chunks with a shotgun blast unless you are too busy rolling up behind them with a shotgun of your own. Great. OK, perhaps that's oversimplifying things a bit, but my point is that Gears 3's multiplayer gameplay hasn't changed dramatically, so those same players who were absolutely raw at Gears of War 2 will pick right up where they left off. Ideally you'll get matched up with players who are at or around your skill level, but my early experiences with the game ended up reminding me that while I think the competitive multiplayer in Gears is well-designed and exciting, playing it against people who play a lot of it is frustrating in an "I guess I'll just turn this off now" way, not a "Gee, I'm going to strive to get better so this stops happening" sort of way. I will grant you that this is more of a personal issue and not an actual problem with the game itself, and for those of you in a similar situation, there's always Horde mode.

The wave-based survival mode that first popularized the style returns with some solid enhancements in Gears of War 3. Horde mode is still all about five guys working together to take down tons of AI enemies on the game's multiplayer maps. But now it almost has a tower defense sort of feel. You'll earn money for kills, and between rounds you can spend that cash on barriers that slow the enemy's progress, turrets that you can operate manually, decoys that distract your foes, and so on. Every tenth wave pits your crew against a random boss battle--you might end up facing two berzerkers, or maybe an effing brumak will show up and ruin your day. Picking up weapons or refilling your ammo also costs money, which means that the new Horde mode is a mix of the old Horde mode, some sort of tower defense-like structural accoutrements, and the Zombies mode from Treyarch's Call of Duty games. While I'm not a huge fan of those inspirations, they come together really well and make an already solid Gears 2 mode even better.

There's also a new mode called Beast that, in some ways, acts as an inverted Horde mode. It's another five-player co-op mode, but now you're playing as the Locust and attempting to kill humans that have holed up behind barricades and other obstacles in the game's multiplayer maps. It's also class-based, requiring you to spend the money you get for each round to spawn as different Horde species. Tickers are the best at bashing through the barbed-wire fences and other obstacles that slow down your team, so it's best to select them up front to expose the humans before moving in with bloodmounts, boomers, serapedes, and other heavy Locust artillery. The catch is that all of this starts with a 60-second timer, requiring you and your team to move extremely quickly if you want to complete a round, though not quite as quickly as that might sound. Everything you attack adds a second or two to your timer. It's a fast, frantic mode that feels nicely different from anything else on the disc. It's a pretty cool change of pace.

All of this online action will, theoretically, work better than it did in Gears of War 2. After numerous complaints about host advantages and other online shenanigans, the game's matches have moved onto dedicated servers. This is a behind-the-scenes change, for the most part. You won't see a server browser or anything like that, and the only place where you get options about which weapons you want to allow in a game or which map you want to play on is when you're setting up a private game. You can also play against bots in those private games, if you like, but only in the versus multiplayer. Bots can't play Horde or Beast with you. Bots can, technically, also appear in public quick match games, but I suspect that once the game is widely available, you probably won't see a lot of non-human players in those matches.

Visually, Gears of War 3 is a step up from the previous game. The campaign takes you across a lot of different locations, and you'll see some great weather effects and lighting along the way. You'll also see plenty of great explosions, and some of the best bangs come out of the Lambent creatures, which pop in a really satisfying way when you take them down. That said, the game's cutscenes often suffer from frame rate issues, as they have in the past. The game also has 3D support, but I found the 3D mode to be sort of a blurry, murky mess. Even with the brightness cranked up, it was difficult to see enemies in some cases, and on-screen text is chunkier and a lot harder to read. Your mileage may vary, I guess, but my official advice is to leave the 3D mode alone. It's not worth it.

Gears of War 3 manages to leave a question or two unanswered, but those holes aren't big enough to drive a sequel through. When the next Gears of War comes along--and lets not be naive about these things, we'll almost certainly see another Gears of War game someday--it'll probably have to be a fairly dramatic shift, from a story perspective. The members of Delta Squad have finally found some closure, and, for all of the derisive things the world lobs at Gears' totally-broed-out motif, the story even manages to be touching on multiple occasions. It's a joy to play, and the game's expanded set of multiplayer options will give you plenty of things to keep you busy for a good, long time. Oh, and Ice-T's pretty great in it, too. 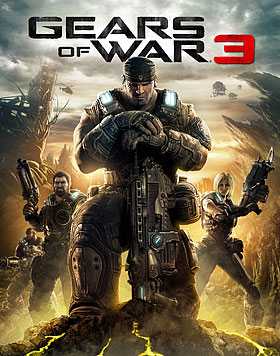