by Brad Shoemaker on December 2, 2014
Share:TwitterFacebookReddit

Dimensions recaptures enough of Geometry Wars' thrills to stand as the best new dual-joystick shooter in quite a while.

It must have been difficult to come up with a sequel to one of the most perfect games ever made, but they did it. It was called Geometry Wars: Retro Evolved 2. Where that game featured five or six times as much content as its laser-focused dual-joystick predecessor, Geometry Wars 3: Dimensions similarly beefs up the offering over Retro Evolved 2, and yet over six years later sells at the same price. I don't love every new thing about Dimensions--some of it feels like it's missing the point of what made the original so great--but there are a lot of interesting ideas in here, and holy cow is it nice just to play a new Geometry Wars game again.

Dimensions is entirely built on and expands the concepts in Retro Evolved 2. That means having to pick up geoms from dead enemies to increase your multiplier. It means gimmick modes like pacifism and king are featured prominently. It means more of those damnable orange triangle things that sweep the board back and forth in a straight line. All the modes from 2 (except sequence) are bundled here in the classic menu, each with an attached leaderboard, so when all else is said and done, you've still got a way to compete for more high scores in the same familiar game types on the new consoles.

The centerpiece of this third game, and the biggest departure, is a new 50-stage adventure campaign that features all of 2's existing modes, along with a handful of interesting new ones, spread across a ton of weirdly shaped levels. Yes, the flat plane of the traditional square-shaped Geometry Wars board takes a backseat here to abstract geometric forms like cubes and spheres, along with more recognizable shapes that resemble things like a peanut or a hot dog. (I'm noticing a theme here.)

It's these fully 3D levels that fundamentally change the way you have to play, since you can't count on seeing every enemy threat in your peripheral vision. Rounding a corner and running smack into an enemy you couldn't see a second before happens a little more often than it should. Where the older games were hard but entirely fair, some of the maps here turn out to be the bad kind of frustrating. Those levels are in the minority, but they can get pretty annoying, and while changing up your play style (leading with your guns around edges and so on) helps mitigate the lack of vision, I couldn't help but long for the big old flat rectangle from time to time.

In addition to a diverse lineup of shapes, every one of the adventure levels has a unique set of rules and conditions that keeps you guessing and changing up tactics in the existing game modes. Some of them have teleporters. Some have moving, lethal walls. Some are populated with virus-like enemies that multiply and fill the entire level if you don't shoot them fast enough. Every iteration of familiar modes like evolved and deadline comes with a twist of some sort, and there are a handful of original modes conceived for adventure. I enjoyed rainbow, where you have to rack up points until a legion of orange scrubbing bubbles paints the entire game board orange. Another mode that starts you with a finite amount of ammo, not so much. At least there's a heck of a lot of variety in there. One of the modes is quite literally Asteroids, with giant enemies that bust up into smaller ones when you kill them. That's a fitting homage.

The adventure mode has a satisfying progression aspect. You can pick from one of five drones and one of five super attacks (which accompanies the traditional smart bomb) when you head into a level. The drones do things like ram enemies, fire targeted sniper shots, or collect geoms for you, while the supers will fire a bunch of homing missiles, create a defensive black hole, and so on. You can level these guys up by cashing in the thousands of geoms you've picked up, and unlock new ones by making it to specific points in the adventure mode. You earn up to three stars for your score on each level, and every 10 levels you need to hit a specific threshold to move on to the next set. The adventure mode is surprisingly tough; more often than not, I'd bump into that star wall and have to head back to previous levels to grind out a few more, since in a lot of cases I was only managing one or two stars my first time through a given level. Getting through the adventure mode at all will take you some time and effort, and maxing out all the upgrades and getting three stars will take a ton more.

While Geometry Wars is at its best as a single-player score attack where you're chasing your friends on a leaderboard, there's both local co-op for four players and an online team-based competitive mode in here for good measure. The co-op is sensibly designed, having each player racking up their own score during a level but then combining them all for stars and a high score at the end of the match. There are only 10 levels in there for co-op players, alas. You also get a couple of four-on-four competitive online modes as well, which have you vying for control of a couple of towers on the map or simply competing to earn score against a set of enemy waves faster than the other team. The online modes are fine for what they are, but multiplayer isn't what I'm coming to this game for, and I had a heck of a time even finding other players to get into matches with in the first place.

Geometry Wars 3 is a really nice package; the animated menu transitions are slick and snappy, you won't see a single load screen once you're in the game, there are leaderboards absolutely everywhere, and the angular neon pop of the series' visual design, loaded with flashy particle effects and deformation of the level surfaces, has never looked better. Purists will undoubtedly find some of the adventure levels more irksome than others, but chasing high scores, drone upgrades, and ever more stars remains satisfying throughout. It's not the perfect Geometry Wars sequel after all this time, but it's still pretty damn fun in its own right. 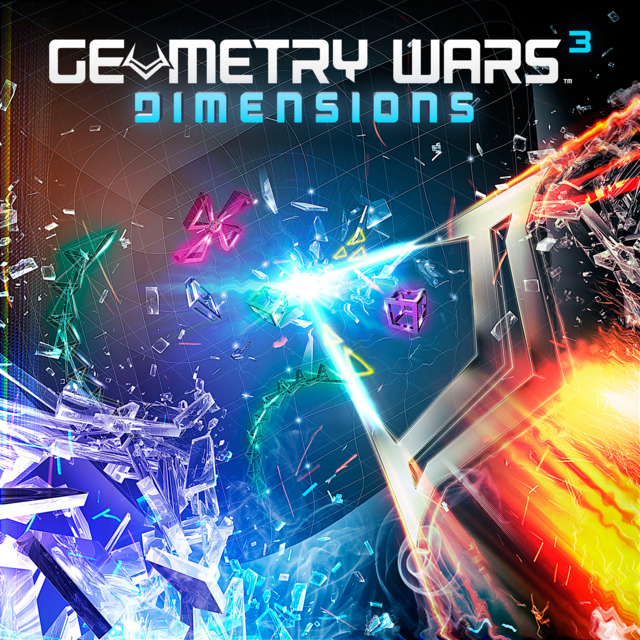