by Brad Shoemaker on November 20, 2009
Share:TwitterFacebookReddit

Thanks to the high-res treatment and bloodily timeless gameplay, these PS2 action classics hold up better than you might think.


The inclusion of a demo for next year's God of War III in Sony's new two-game compilation God of War Collection makes it starkly evident how little this series has diverted its attention from blood-soaked, button-mashing Grecian slaughter since its initial 2005 release. From that first game to this next one, sullen anti-hero Kratos has always busted out the exact same chain-whip combo when you hit square-square-triangle; he's always ripped hapless enemies in half right at the waist. The magical attacks and mythological foes might become more outlandish over time, but playing this package reminds you how remarkably consistent God of War's basic rhythms have remained over time.

That's probably just how fans want it--and it's probably why the series' first two games, landmark releases on the PlayStation 2 in their day, are still so playable now. There's something to be said for devising a winning formula and sticking with it, after all. The games do start out sort of button-mashy, but they allow room for technique in the action before they eventually start to require it. The carrot-on-a-stick drive of amassing red orbs to exchange for deadlier powers is still a good motivation to plow through these games, as are the epically cinematic (though largely scripted) boss encounters. Remember impaling that gigantic hydra's head onto the broken ship's mast at the beginning of the first game? That fight hasn't lost as much of its original wow factor as you might think.

God of War Collection lets you visit or revisit these first two installments in what's now one of Sony's tentpole franchises, giving you a chance to bone up on where Kratos has been and where he's going prior to the launch of that next big God of War game (the first on the PlayStation 3) next March. From his quest to redeem his sordid, violent past in the original game to the travails of newfound godhood he grapples with in the second, Kratos' tale is one still worth absorbing, and although I can't say with certainty that you'll need to know the whole story to appreciate next year's sequel, it sure won't hurt if you do.

God of War's narrative elements may be timeless, but its visuals, however recent, are not. At least not in their original form, which Sony has dramatically gussied up by increasing the resolution to a sharp 1080p and locking the performance in at a buttery smooth 60 frames per second. At nearly five years old, the first game looks surprisingly good with these improvements, but it's the second one that really stands out. Granted, God of War II came out after the PS3 did, but at times while playing it in this collection you could start to forget it was actually designed for a generation-old piece of hardware in the first place. That visual excellence probably owes in large part to strong art design, but the technical polish on this package makes a huge difference in keeping it current too.

For $40, it's probably beyond the scope of this disc to expect any new special features, nor a PS3-compatible version of last year's PSP installment, Chains of Olympus. (Sony would probably still like you to buy that one on the PSP.) At least you do get the original behind-the-scenes bonus videos that shipped with the two original games, in which you get to see a younger, goateed David Jaffe talking shop, and Cory Barlog making a sandwich in his kitchen. And Sony has integrated a raft of easy trophies into both games, just about all of which you could earn on your first time through each one. These are broken out into two separate entries on your PSN profile, so this disc is recommendable to anyone looking to earn a couple of easy Platinum trophies.

It's also essential for diehard God of War purists who want to own the best possible versions of these games for posterity. For someone who already has the original releases and a backwards-compatible PlayStation 3, on the other hand, God of War Collection is a harder sell. But it's ultimately most valuable to people who didn't play much or any of the originals, for whom this package serves as both a fine refresher course and also a couple of kick-ass action games, available on the cheap.
Brad Shoemaker on Google+
Load Comments 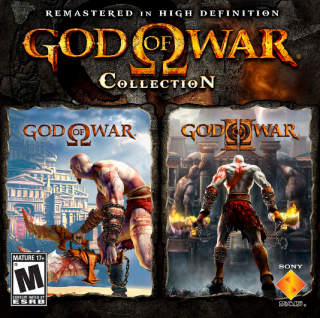