by Patrick Klepek on August 15, 2013
Share:TwitterFacebookReddit

This house has a story to tell, and players patient enough to listen will be rewarded with a touching story that won't soon leave you.

Have you ever walked by an empty house, and thought about going inside? A house is just a pile of bricks until someone lives inside, and then it becomes a home. Houses have stories to tell, so long as we’re willing to listen. Gone Home, the debut game from The Fullbright Company, is about one very specific house with one very specific story, and it’s asking you to listen closely.

It’s difficult to talk about Gone Home without saying more than should be said for anyone already sold on it. Do know that Gone Home has lived up to sky-high expectations for the next project from the creative team that delivered the exceptional Minerva's Den add-on for BioShock 2. For anyone that’s curious to know more about what makes Gone Home work so darn well, keep on reading.

Gone Home is set in 1995, and opens with the arrival of Kaitlin Greenbriar. That’s you. Returning from a whirlwind trip through Europe in the dead of night, Kaitlin approaches the front steps of her house during the height of a crackling thunderstorm, greeted by a hastily hand-written note from her younger sister, Sam. The note instructs Kaitlin that she’s gone and not to worry, which, of course, is every reason to worry. What happened here? Gone Home is played from a first-person-perspective, and there is no combat. This is a game about exploration, though one not without its share of tension. But you will never pick up a gun, and your primary means of interacting with the world is opening doors, shuffling papers, and closely examining nooks and crannies of your family's house. If you think you can touch it and interact with it, chances are The Fullbright Company will give you the option to.

Though Kaitlin’s family lives in this house, everything is unfamiliar. There’s a map that fills in as you progress through the house, appropriately labeled as it becomes clear what each room’s function is. The Fullbright Company has meticulous hidden letters, books, notes, magazines, manuscripts, inscriptions, cassette tapes, labeled recordings of X-Files episodes, and countless other objects throughout the house. Hidden is the wrong word, though. If someone was tasked with combing through your home and building a narrative from what was inside, it might feel like some of your stuff was hidden, too. Instead, this place feels incredibly natural. It looks...like a home. It’s messy, there are boxes everywhere, and Kaitlin’s mom was probably upset about the lack of help. There are no objects fluttering with gold dazzles to signify their importance. It is absolutely possible to miss key bits of information, but if you never knew they existed, how important were they? The story you tell in your head is only as real as the the information in front of you. Do missing pieces matter, then?

By god, though, is it fun to look at the pieces. They are everywhere, and each colored with immaculate detail. Fans of the high-resolution image genre will fall over themselves looking through the meticulously detailed pieces of history The Fullbright Company has constructed. The few times where images aren't detailed enough to read the tiniest bits of text are disappointing, but only because nearly every other spot in the house has been given such close attention. Heck, there are even physics associated with some of the objects. Cassette tape holders open, flip around, and reveal secret messages to those clever enough to manipulate them in the right way. And for those who are worried about causing a mess, the game even includes the ability to place things exactly as they were. It's the kind of touch that speaks volumes about the game's design values.

There is a path through the game, but how long you spend on that path is mostly up to you. There is very little preventing the player from barreling through the main storyline, though you’ll have to slow down to discover triggers that signal how to access locked parts of the house. These bits are deliberately easy to find, and are often closely connected to a series of voice overs by Sam, talking as though she is right next to you. (Sam is voiced by Portland voice actor Sarah Grayson, and she does excellent work here.) If anything, what’s difficult is convincing yourself to move to the next room. Patience is rewarded in Gone Home, as patience will help you discover the answers to all of your questions. Everything you want to know can be found within the house, though the game will not connect the dots for you. There is no plot summary, and material is sometimes presented out of order. This makes exploring the house, even after the story ends, continually satisfying.

Without spoiling, this all makes Gone Home sounds much more mysterious than it actually is. Still, it’s impossible to explore the house without cringing as a door creaks opens, or you start walking into the basement. Thunder and lightning strike without notice, making their appearance all the more startling, but it’s not timed to the flickering of lights or an eerie noise down the hall. There are no jump scares in Gone Home, and there are no ghosts hiding in a closet. But all the same, Gone Home feels exceedingly creepy, and the game thoughtfully plays with the differences between its dramatic presentation and the actions actually playing out on the screen. I mean, when you’re alone at home and it’s time to turn off the lights, it’s easy to tell yourself there’s nothing following you around the house, but once that idea pops into your head, it’s hard to let go.

The experience of playing Gone Home becomes more impressive upon reflection. We’re used to games hitting us over the head with big plot twists and character moments. Games are often the opposite of subtle out of fear the audience will not understand the magnitude of the moment. “We wrote this story, and this big thing happened, you see, and you better get it!.” As the layers are removed from Gone Home’s story, there is no suite of violins to underscore the revelations, and no characters to remind us what we just read or heard. (Chris Remo's soundtrack is, however, hauntingly beautiful.) Gone Home places an impressive amount of faith into the player to discover what The Fullbright Company has laid out before them, and seems willing to lose players who aren’t going to put in the effort to come along. There is, for lack of a better phrase, a “holy shit” moment early on in the game, and it acts as though nothing's happened. The house is still there, you’re still alone, and it's time to move on.

Prepare for a nostalgia hit, too, and not just '90s references. Gone Home will remind you what it’s like to be young, naive, and full of passion. Everything mattered and nothing mattered. No one understands you and no one ever will. The world is both infinite and unfathomably small. As the story unfolds, what’s remarkable is just how unremarkable it really is. Gone Home is an epic story, but its definition of epic is far removed from how we usually talk about scope and drama in games. It’s epic, personal and revelatory to the people involved, and that’s why it’s so special. The moments in my life that I cherish the most--my first love, realizing my brother was my best friend, moving to San Francisco, getting married--would not register against saving the universe from an alien threat, but these are the epic moments in my life. Gone Home grounds itself by reveling in life’s quiet, defining moments, the ones you might write down in a diary, underneath a set of books, only to find years later.

What a crazy kid you were. 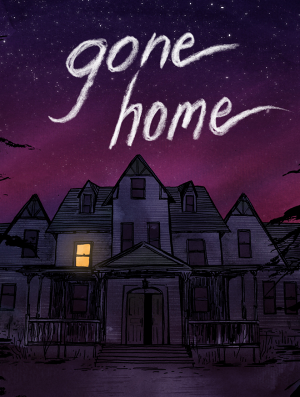