by Ryan Davis on February 22, 2012
Share:TwitterFacebookReddit

The name might lead you to believe otherwise, but it doesn’t take much time with EA Sports’ Grand Slam Tennis 2 to realize that this is a first-generation product, one that owes significantly more to Sega’s Virtua Tennis than the original, Wii-exclusive Grand Slam Tennis from a few years back. Sure, the evolution of the Virtua Tennis games has become, shall we say, subtle, over the past few years, yet Grand Slam Tennis 2 still can’t quite break out of that decade-plus shadow. It’s a decent start, but EA Sports still has some iterating to do before it’ll have a genuine competitor.

Though it trades the Japanese arcade gloss and crystalline guitars of Virtua Tennis in favor of EA Sports’ bloodless house style, the most meaningful differentiator in Grand Slam Tennis 2 lies in the controls. By default, the game attempts to map all of your racquet mechaniques to the right stick, and you’ll push the right stick down and up at various angles and with varying timing to serve and perform the flat, slice, top-spin, drop, and lob shots that make up your arsenal of moves.

While the underlying intent of the right-stick controls that EA Sports is so damn fond of is to create a more tactile connection to the on-screen action, the irony here is that it ends up feeling more complicated and mechanical. After spending some quality time being yelled at by resident pro John McEnroe in the tutorial--a must your first time in--I spent my first several hours with Grand Slam Tennis 2 with these right-stick controls. I wouldn’t say I struggled with them, but my performance improved immensely once I switched to the familiar face-button controls. Don’t chalk my preference entirely up to familiarity, though; it’s simply easier to perform with the precision of timing and aiming afforded by button presses, rather than the comparatively long throws and vague sense of position offered by the right stick.

Digging into Grand Slam Tennis 2’s nest of menus, it’s hard to shake the sense that you’re playing “EA Sports Presents: A Sport,” with options that are bland, predictable, and limited. You can play singles and doubles on real courts like Wimbledon or generic EA Sports-branded courts, you can set up tournaments, you can play online. The game is well-stocked with male and female pros, both current and classic, though there’s not much personality beneath the likenesses. Even the character creator, which features EA Sports’ patent-pending horrible monster generator better known as Game Face, feels like it was cut whole-cloth out of the Tiger Woods series.

There are some interesting challenges in the game’s Classics mode, which sticks you in a series of real and fantasy scenarios from the past 30 years of pro tennis. The career mode, though, represents the bulk of Grand Slam Tennis 2’s bid at longevity, letting you take your custom tennis pro through a 10-year career. Though there’s no visualized calendar, you can feel time tick by with each event, which invariably boils down to either a bland training exercise, a one-off exhibition match, a pre-tournament, or a proper, bracketed-and-branded tournament like the Australian Open, US Open, or Wimbledon. With little-to-no variety in the actual career action, monotony kicks in quick. Even when playing on an elevated difficulty level, I was consistently steamrolling the competition well into my second year. I could complain more about the career mode’s ill-conceived player progression, which doles out points inconsistently and feels largely disconnected from the XP system, if I wasn’t so consistently crushing the competition regardless.

The closest that Grand Slam Tennis 2 gets to having a personality comes from commentators Pat Cash and John McEnroe. At first, there’s a real casual, familiar charm to the way Cash sets up McEnroe’s long-form insights into your play style. It doesn’t feel scripted, and the expertise seems valid. The recorded material starts repeating itself almost immediately, to the point that it’s not uncommon to hear the same bits about playing deep and match point strategies several times over a single match, scuffing off any sense of naturalism almost immediately. Other quirks, such as the ability to play against Cash or McEnroe while they simultaneously provide commentary, reinforce the sense that the team behind Grand Slam Tennis 2 is still just getting its footing.

It’s damn hard to talk about video game tennis without bringing up Virtua Tennis, particularly when a game, like Grand Slam Tennis 2, hems so close to that original arcade formula. It’s a facsimile that’s executed well enough; there just aren’t any good reasons to recommend Grand Slam Tennis 2 over the games that it cribs from.

You cannot be serious- John McEnroe

“EA Sports Presents: A Sport" made me laugh pretty hard. Sounds like you've cracked their process, Ryan. To be more on topic, sounds like I should just keep playing my copy of Virtua Tennis 4. I really enjoy a good tennis video game, shame that this one seems to be so rote.

I wish the career mode in these games was less superficial and more like what an actual tennis player's schedule is like. Virtua Tennis almost gets it right, but there's so much more you can do there. It's also bizarre to be starting out as an amateur and yet be beating Sharapova and Federer et cetera.

I wish the career mode in these games was less superficial and more like what an actual tennis player's schedule is like. Virtua Tennis almost gets it right, but there's so much more you can do there. It's also bizarre to be starting out as an amateur and yet be beating Sharapova and Federer et cetera.

Yeah, I really like the whole Virtua Tennis career setup on the board game-type map. It's silly, but it fits in with the tone of the game in general. What kind of improvements would you want? I'm sure you're right, but I can't think of anything offhand.

To your other point, I totally agree. It was really jarring seeing that in the QL of this game. You'd think they could make up some rookies for you to play against early in the campaign. It's not that hard to come up with some awesome sounding fake tennis guy/lady names. James Deveraux, Danny Beauregard, Ashley Williamson. See, easy!
9 years ago

Hey Giant Bomb, is there any way some of us could pay additional money to block certain commentators or just the whole comments section?

Well, for better or for worse, I'm glad EA tried. They should probably have polished their mixed bag more. I'm sure if you really like tennis games, though...

I know I won't be rejoicing.

Totally sick of EA's annual iterations. People complain to death over what Activision is doing with Call of Duty, well EA created the market for yearly updates for £40. How about people stop buying Madden before Call of Duty, eh.

Hey Giant Bomb, is there any way some of us could pay additional money to block certain commentators or just the whole comments section?

Not really sure what I did wrong here, just wanted to point out what I thought was a typo.

@sofacitysweetheart: Well there's more of a reason for the annualization of sports games, because teams are subject to a lot of change. But then again, they can just release DLC for those types of changes. I don't know, annualizing sport games always made much more sense to me than doing them for most other games. With the advent of DLC it just seems doing yearly sport games is not needed.

Anyways what I really wanted to say is that I thought Will Ferrell was the cover athlete for the game.

I tried the Demo and this was not a good tennis game, i really miss the days of smash court tennis, the gameplay was really close to a real tennis point. PLEASE! make it available for the PSN!

I would rather you referred to a real tennis game, Top Spin is the only tennis game series that seriously atempts to simulate the game of tennis.

From this review I don't believe you have any experience with the Top Spin series whatsoever and therefore I conclude that this review is useless to me and anybody that has even a remote interest in tennis.

Top spin?!? nah men (@kingando420) in that game you can play defense for like, forever! going from one side to side, it gives you too much control over the player from the moment you hit the ball making it easy to recover after a defense shot

Virtua Tennis became irrelevant when Top Spin 4 came out and was awesome. I was hoping this was leaning more towards the Top Spin realism angle with better animations. But after playing the demo, it felt so shallow and I felt no impact when hitting any shot. Guess Ill just wait until Top Spin 5 and hope for improved animations.

McEnroe looking a little bit Ryu in the boxart.

Virtua Tennis became irrelevant when Top Spin 4 came out and was awesome. I was hoping this was leaning more towards the Top Spin realism angle with better animations. But after playing the demo, it felt so shallow and I felt no impact when hitting any shot. Guess Ill just wait until Top Spin 5 and hope for improved animations.

I got Top Spin 4 recently (the GST2 quick look actually made me buy it) and while I much prefer it to Virtua Tennis I don't think VT is irrelevant. When a friend came over who hasn't played any tennis games it was impossible to play TS4 with him, but Virtua Tennis 2 on Dreamcast was just pick up and play and he could do reasonably well.

I was somewhat startled by seeing Ryan's name on a review, since I was beginning to wonder what exactly he's been doing lately.

Eh, I'm planning on renting the game from GameFly. After watching the quick look I figure I can waste some time playing Tennis a bit. I miss Mario Tennis for the GBC. Only tennis game to really get me excited. >_>

Ryan, you need to play some Top Spin. Now those are some tennis games. 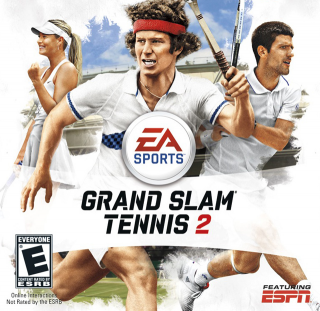 E3 2021: Raji: An Ancient Epic Gets an Enhanced Edition with Authentic Hindi Voiceovers