by Alex Navarro on June 11, 2012
Share:TwitterFacebookReddit

Though Gravity Rush's gravity shifting mechanic is genuinely awesome, the game itself doesn't offer enough interesting ways to use it.

Gravity Rush is an easy game to want to love. Technologically, it's easily one of the most impressive looking titles to hit the PlayStation Vita so far. Mechanically, it invents something truly original in its gravity-shifting gameplay. It's a wonderful idea executed with only a few dampening caveats, one that makes the game's world utterly thrilling to explore. However, as we've seen time and time again over the years, technology and mechanics aren't all you need to make an engaging game. You have to find interesting, or at the very least exciting things for the player to do with those mechanics and tech. I waited very patiently for Gravity Rush to finally kick into gear and start offering me some truly unique puzzles and challenges. And I waited. And waited. And waited some more.

Instead, Gravity Rush pushes its gravity-shifting mechanic so far to the forefront that you have to wonder if the developers even really knew what to do with their discovery. So much of it revolves around mindless busywork and mediocre combat that you can't help but feel a pang of sadness over the wasted opportunity that is this game.

Don't get me wrong, Gravity Rush is by no means terrible, but no aspect of its game design nor story ever matches up to the genius quality of the game's gravity shifting mechanic. You play as Kat, a sort of accidental superheroine whose abilities come from her best friend, a celestially-colored cat who grants her the ability to adjust gravity in any direction imaginable. Kat doesn't so much "fly" as she does "fall," though she can fall in any direction until she runs into a platform or solid object. Once she does, she can wander around as if she were safe on the ground, even though she might be sideways or upside-down.

Yes, that can be incredibly disorienting. Your only real visual cue as to which way you might be is Kat's hair, which flops in the direction of the normal ground. However, after a few missions and fights, the disorientation mostly gives way to a thrilling sense of freedom. There is a genuine feeling that you can go basically anywhere (within the somewhat restrictive confines of this game world). You can fly up thousands of feet, dash across the roofs of huge buildings to get from one side of the city to the other, and even just float in the air aimlessly, circling around and observing the world that lies before you.

As great as all of that is, it's not much of a game to just fly around with no purpose. So to give your gravity-adjusting antics some context, Gravity Rush tosses together a goofy amnesia storyline, some half-baked combat mechanics, and enough dull errand-running and lite puzzle-solving to more or less fill 10 hours worth of game.

Early on, this stuff is fine. We learn that Kat has arrived in the highly vertical city of Hekesville with no memory of her previous life, where she is, or why this cat is hanging around her giving her insane powers. It turns out that not all is well in Hekesville, as massive gravity storms simultaneously barf out nasty black creatures called the "nevi," and threaten to suck Hekesville whole into some unknown dimension. In fact, large chunks of the city have already disappeared. Shortly after meeting a mysterious man who calls himself a "creator," Kat finds herself all too happy to help out her new place of residence by tracking down the missing parts of the city.

In order to do this, Kat must fight a lot of Nevi, float to a number of different checkpoints, sometimes solve minor puzzles, and then repeat the process again and again until the game gets around to its meager conclusion. In theory that would be a fine enough progression, except that the combat dominates far too much of the game for how generally unremarkable it is. On the ground, Kat has a few kicks she can play around with, while in the air, she can deliver more powerful blows by gravity shifting directly into enemies' weak points. The first few times you do it, it's actually pretty cool. Unfortunately, despite earning new abilities over time, the combat never evolves past this initial point. The only wrinkle the game throws at you is increased agility from your enemies, meaning that they're more likely to dodge out of the way of your attacks, or at least blast you mid-kick.

There is a maddening lack of precision in the airborne combat that makes this increased agility an absolute chore. You're not likely to die too often (especially given the bountiful numbers of health power-ups scattered around), but you are likely to get frustrated as you find yourself trying to line up a highly precise attack, only to have the Nevi move out of the way at the last second or get knocked out of the air by an unseen attacker. By the time Gravity Rush gets around to introducing boss fights, you'll be dreading them not because of their difficulty, but because of the game's inability to make fighting them the least bit fun. A lock-on mechanic might have made Gravity Rush's combat too easy, but it also would have eradicated the irritation associated with it.

The sections of the game where you find yourself traversing around checkpoints and solving occasional gravity-based puzzles are at least a bit better, in that they rarely confound or frustrate. But there's also not much to them. You'll bounce around the world, talking to people in obtuse chunks of dialogue, collecting gems and other random items, fixing various broken pieces of the world, and sometimes fight evil things. That's about the whole of the experience. There are optional side missions that involve races through the city, or combat challenges against waves of Nevi, but they don't take good enough advantage of the act of gravity shifting to be worth your while.

Perhaps if the story were more engaging, these issues might be more tolerable. Sadly, Gravity Rush abandons nearly every opportunity to flesh out its interesting world practically from the get-go. You'll be introduced to a number of different characters throughout the story, and it's straight-up maddening how willing the script is to just toss them aside. People who seem like they should be able to offer you simple answers instead speak in obnoxiously cryptic terms just for the sake of keeping that carrot of "what the hell is going on here?" dangling in front of you just a bit longer. And by the time it actually gets around to dropping that carrot in front of you, you're left with an abrupt conclusion that's neither satisfying nor particularly coherent.

It's depressing, because Kat seems like a totally interesting character you'd want to know more about. Being that she is suffering from amnesia, you'd think her big thing would be pushing to find out who she is and where she came from. And yet, she often just abandons her search in favor of the most frivolous activities. It's one thing to take a break from your identity search to rescue children being sucked into a vortex of doom, but she's not even particularly inquisitive when she's just walking around talking to people. Instead of demanding to know what's going on from this creator fellow, she's more than happy to simply go along with whatever vagaries he spouts and enter the magical dimensional vortex that exists inside his trench coat (no, that's not a euphemism) to go fight some more Nevi. And despite the fact that she has no idea who she is, can shift gravity every which way for no identifiable reason, and the whole world is falling into a dark pit of despair from which only she can apparently rescue it, she still finds time to complain about not being able to find a boyfriend in this town. What?

Hekesville is a world you'll want to explore. Its architectural design and gravity-defying placement (it sits atop a huge, narrow column of rock that can barely be called a mountain) are amazing to look at. That Kat can explore it with such freedom of movement is awesome, especially given the game's gorgeous cartoon art style and generally solid frame rate. But without more things to do and more engagement with the player, Gravity Rush can't sustain itself for the long-haul. As it stands, the gravity-shifting gameplay offered might be complete enough for game-starved Vita owners on the hunt for something to do with their device. But do manage your expectations, lest you be disappointed by how hollow Gravity Rush is underneath its breathtaking shell. This is a game that does one thing very well. If you need more than that, then Gravity Rush isn't for you. 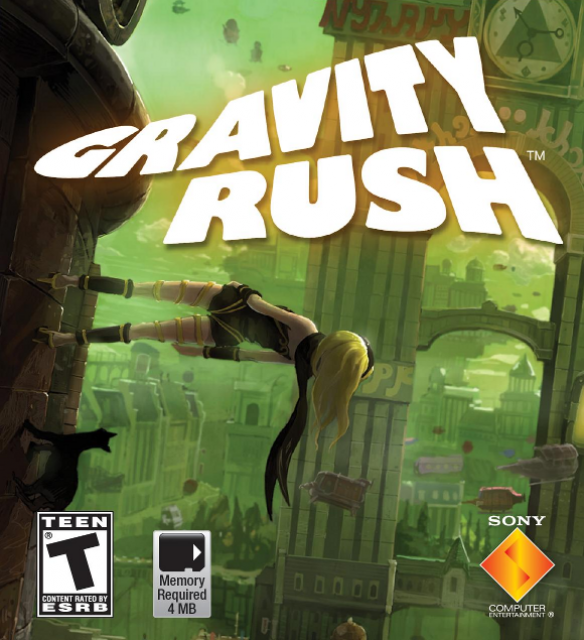