by Brad Shoemaker on August 26, 2016
Share:TwitterFacebookReddit

Drifting over the polygonal landscape looking for crystals is still a peaceful good time, if you can overlook a few flaws.

I didn't want to live in a world where the sequel to Grow Home was the slightest bit disappointing, but even goofy little climbing robots can't always get what they want. Grow Up is built around the same tactile hand-over-hand climbing mechanic that made Grow Home one of 2015's best little games, and this sequel makes a valiant attempt to blow out Grow Home's bite-size experience with a big old world map and more things to do. It's still satisfying to claw your way up a giant beanstalk and collect every last crystal in sight, but some new mechanics that don't play to the game's strengths and disappointing performance on console make Grow Up harder to love than it should be.

Grow Up at least nails its setting by expanding the first game's small floating-island motif into a full planetoid, complete with multiple biomes, an asteroid belt, and a ton of caves to spelunk. Everyone's favorite inebriated, stumbly robot B.U.D. finds himself stranded there after his wisecracking spaceship M.O.M. crashes and distributes her debris all over the place for you to go collect. The simple, flat-polygon look of the first game is even more effective here, as it's used to render a wider variety of places like a desert, a polar glacier, and a glowing giant-mushroom forest in expressive strokes. The game also makes great use of its day/night system by having the planetoid actually rotate, so the day and night phases actually move around the planet. In other words, not only will you experience dawn and dusk if you hang out in one place long enough, but once you get some of the late-game mobility upgrades, you can also fly around the planet (which takes like two minutes tops) and literally chase the sunset. With the final aerial upgrades, you can even orbit the planet, sailing peacefully through space as the world turns below you. It's a gorgeous game to explore and float around in, and it does a fantastic job of establishing mood.

If you played Grow Home, you know exactly what the core gameplay is here: each shoulder button controls a hand, letting you grip any surface and climb up it in a loose, dynamic way that feels oddly liberating. Initially you'll get around the world purely by climbing--which worked well in a very small space like that of Grow Home--but the game world is so much bigger this time around that at first it feels a little cumbersome to cover any real distance quickly. Grow Up's solution is to start dishing out jetpack upgrades faster than its predecessor, and it also quickly gives you a glider so you can capitalize on all the falling you'll inevitably be doing as you tumble off of one sky island or another. Gliding is in itself a fun way to get around (although it's infuriating that the game reverses the glider controls depending on which way the camera is facing), but by the time you get the upgrade that lets you combine the jetpack and glider for some straight-up powered flight, it's easy to forget you could ever climb in the first place. The flight options, useful as they are, seem like a strange circumvention of what made the first game interesting.

This sequel also gives B.U.D. the ability to fill out a plant index by finding and scanning two dozen different plant forms as you run into them. Once you scan a plant, you can then grow it anywhere you want by tossing its seed on the ground. This idea is pretty neat in concept, and it lets you do some ridiculous stuff like building a mile-high tower of bouncy mushrooms, but in practice all two dozen of the available plants serve the same purpose--elevate you into the air quickly--so you'll generally find the one you like and just stick with that. Or not, because the level design usually places the relevant plants right where you need them anyway, and again, you'll quickly get the flight upgrades that make all your other methods of gaining height redundant. The plant mechanics are a neat idea that don't really, uh, blossom in the way they deserve. There's also a new ability to roll B.U.D. up into a ball, morph ball-style, but I never found even one situation where that ability seemed especially useful.

Most of what you're doing to progress in Grow Up, you already did in Grow Home. Instead of one starplant to grow up into the sky and reach the highest islands, you now grow three; the hundred crystals you collected in the first game are followed up here with half again as many. That stuff is still fun to engage with on a basic level, so that familiar repetition isn't totally damning, but when you consider that Grow Up's new content consists primarily of timed race challenges (the bottom-tier fodder of open-world side content), the whole package feels a little thin. Don't even try to tackle those challenges early in the game, before you have a better jetpack and glider; that's a recipe for extreme frustration. Later on, with all your flight upgrades, finishing them becomes utterly trivial. At that point, the hardest thing about the timed challenges is finding them all. The game has a world map that does helpfully mark items of interest automatically, but once you've finished most of the activities, the map doesn't give you any way to pinpoint the few items you have left. I spent a maddening two extra hours scouring the world for the last two challenges I'd missed before finally discovering them hiding in places where the map didn't make them particularly visible.

Still, Grow Up does enough right that I stuck out its quirks and did 100 percent of everything there was to do, and all of this is quite a bit easier to forgive when you consider that Grow Up costs a measly 10 bucks. The console game has some disappointing performance issues--the PS4 version runs drastically worse than the first game did on the same platform--but on even a modest PC it looks and runs great. There, it's worth paying the low asking price (and overlooking a few flaws) just to drift placidly through the heavens, surveying the lush polygonal landscape below. 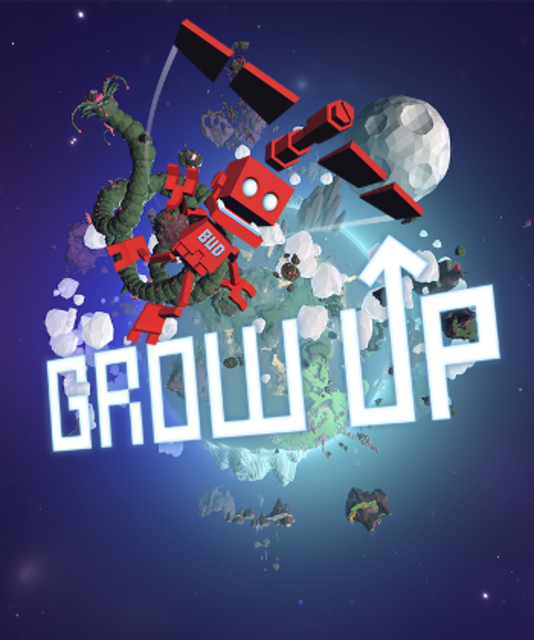