by Alex Navarro on April 9, 2013
Share:TwitterFacebookReddit

DrinkBox Studios is quietly becoming one of the more reliable indie developers working today. Since forming in 2008, the small team has released two entries in its underrated Tales from Space series, and now has Guacamelee! under its belt as well. While the Tales from Space games were fun, if slight, puzzle platformers, Guacamelee! is a full on MetroidVania-style side-scroller featuring, of all things, an adventuring luchador. It's a strange, yet incredibly thoughtful meshing of beat-'em-up brawler mechanics, elaborate and challenging level design, and an aesthetic that mixes Mexican cultural themes with DrinkBox's now-established cute cartoon art style. More to the point, it's a great deal of fun nearly from beginning to end.

You begin the game as Juan, a peasant farmer in a particularly colorful rendition of Mexico that is straight up crazy for lucha libre. That's maybe not too far off from the truth, since Mexican wrestlers are treated with a kind of reverence that Americans would sooner reserve for reality television stars. Anyway, Juan is not a luchador--at least, not yet. While initially just an impoverished man, Juan is forever changed when a skeletal demon comes to town and kidnaps his beloved, whisking her away to various far-flung locales in order to perform a ritual that will merge the land of the living and the land of the dead. Juan is quickly dispatched as he attempts to intervene, but a magical wrestling mask gives him the power, speed, and swagger of wrestling's elite...as well as a few other powers you rarely see employed in the ring.

At its core, Guacamelee! is primarily a brawler. You run around, punching, jump-kicking, and grappling various sombrero'd skeletons, colorful dragons, spike-laden armadillos, and whatever else DrinkBox feels like throwing at you. There isn't a huge array of enemies to fight, but the game is good about introducing them slowly over time, and giving each enemy type variable powers--like attack-coded shields, and dimensional shifting between the living and dead worlds (which you can eventually switch between on the fly)--so as to keep you on your toes. As you fight through the world, you'll encounter giant statues, which you destroy to earn new abilities, like a flying uppercut, a diving punch, and a dash attack.

These statues are maybe the most explicit Metroid reference in all of Guacamelee!, though really, the whole game is essentially a tribute to the classic exploratory side-scroller. There is a larger world map that you can travel through as you like, though many areas are locked until you acquire specific abilities that will allow you to traverse certain environmental obstacles. It's a good-sized world, too, filled with diverse scenery and, in the town areas, people you can talk to and take up side quests for. Unfortunately, the side quests aren't super engaging for the most part, and some of the bonus areas are among the game's most infuriatingly difficult parts. Then again, all that stuff's pretty optional anyway, as you can progress just fine through the story mostly ignoring it.

That progression doesn't take more than maybe five or six hours total, though nearly all of that time is well spent. Guacamelee! is one of those games that is thankfully utterly devoid of chaff. No area in the game feels padded or otherwise out-of-place. The flow of the campaign feels meticulous in its design, keeping the player constantly aware of where they ought to go next, but providing ample opportunity to poke around and look for hidden stuff. The level and world maps are particularly handy, which is always crucial for a game of this type.

More importantly, the combat and level designs are good enough to keep you at rapt attention throughout the adventure. While I might have liked a few more actual wrestling moves in a game featuring a luchador, the flow of combat is tight, responsive, and delightfully combo-driven. Bosses provide a stiff challenge, but the game rarely becomes so difficult as to cause serious frustration. More often, those situations come from some of the game's tougher jump puzzles, which at times can be downright Meat Boy-like in their sadism. Thankfully, DrinkBox relegated these mostly to a few later-game scenarios, rather than sprinkling them all over the place.

It's worth noting that Guacamelee! does feature co-op play, though it's not really much of a draw. The tough platforming sequences can occasionally make this feature a chore, and the combat sequences don't really require a second player to be fun. Still, if you've got a friend around, they can jump into the game at any time, though it'll have to be offline as there is no online co-op support.

What stands out most about Guacamelee! are its visual and audio aesthetics. The game's art is downright gorgeous, nicely animated, and filled with lots of subtle (and some not-so-subtle) visual gags and references that longtime video game and Internet meme enthusiasts will undoubtedly pick up on immediately--though it's worth noting for meme haters that it's all just background art, and none of it impacts the actual game in the slightest. The soundtrack is, unsurprisingly, rooted in Latin music and mariachi, but it's all exceptionally well-produced and lines up beautifully with the game's visual presentation.

Briefly, it should also be noted that Guacamelee! comes in both PlayStation 3 and PlayStation Vita varieties, and that buying one allows you access to the other. Neither version of the game seemed markedly different from the other based on my play-throughs, and the cloud-saving between versions never failed to work as intended. Whichever version you end up playing, you should be just fine.

Its few quirks and off moments not withstanding, Guacamelee! nails more than enough of its ideas to breathe new life into the once moribund lucha libre brawler genre. It's short, sure, but it also doesn't wear out its welcome, focusing solely on the necessary pieces of an adventure that's often as challenging as it is thrilling. In Guacamelee!, DrinkBox has both provided a wonderfully crafted action game for old school and new players alike, and established itself as a developer very much worth paying attention to. I can't wait to see what they get up to next.

Editor's Note: This review originally stated that there were no piledrivers in Guacamelee!, which is incorrect. A piledriver, as well as a few other wrestling maneuvers, are available as unlockables via the in-game store. Giant Bomb regrets the error, as piledrivers are awesome, and we would never want to imply that piledrivers do not exist where piledrivers most certainly exist. Cool? Cool. 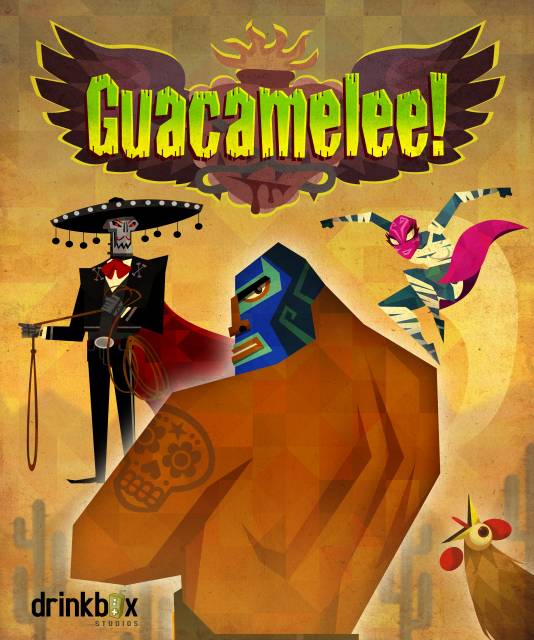