by Brad Shoemaker on June 29, 2011
Share:TwitterFacebookReddit

Back in 2009, the PSP's batty little role-playing takeoff Half-Minute Hero managed to parody everything you loved (and possibly hated) about the Japanese RPG of yore. The new port to Xbox Live Arcade comes with redrawn high-def artwork, a bizarre online multiplayer mode, and the subtitle Super Mega Neo Climax, which makes roughly as much sense as anything else in this truly odd game. Actually, the best enhancement to this new version is exposure to a wider audience. At what's now considered a modest downloadable price of $10, it's worth tuning in just to witness the baffling humor and hyperkinetic spectacle that is Half-Minute Hero.

Superficially, everything about the game comes straight from the 16-bit RPG classics of the '90s. There's a new magic spell making the rounds on the evil-bad-guy scene that destroys all of creation 30 seconds after it's uttered, and naturally you're the only hero fast and strong enough to stop one "evil lord" after another from getting their rocks off by undoing everything that is. Except, instead of spending 30 hours leveling up your character and questing across the land to take down the bad guy du jour, you spend 30 seconds. There's simple comedic value in the speed that your little sprite dude zooms around the overworld map and powers through random battles without any input from you. Not only do you level up after practically every battle, sometimes you gain three or four levels at once. I'm not going to lie, after spending dozens of hours grinding through character progression in plenty of other RPGs, getting to level 30 in a matter of seconds is a pretty thrilling thing.

The game has a really odd structure that sends you through a main quest comprised of around 30 missions, then has you play a number of epilogue quests with different characters before reconvening for a five-minute showdown (truly epic by this game's standards) with the ultimate evil. Each of the 30-second quests in that main campaign actually breaks down more like a short puzzle than a bonafide RPG experience, though. Since you've got that timer incessantly ticking down until the world ends, you're hauling ass between towns and caves, keeps, and dungeons trying to level up and fulfill any specific quest objectives before time runs out. Your saving grace is that a wisecracking goddess of time will reset the counter back to 30 whenever you lavish tithes upon her back in town, so you can grind out cash and then pay to extend your questing time. The catch is, the goddess's price goes up every time you use her services, so there's a balancing act going on where you're trying to cram in more activity in a given quest without pricing yourself out of the ability to keep resetting time at all.

Since the game is inherently lampooning the idea that traditional RPGs are too slow and repetitive, it's ironic that Half-Minute Hero almost gets too repetitive itself. The core of what you're doing--leveling up and gaining some new weapons and companions so you can go kill yet another big bad--never changes, and that repetition starts to feel a little like a grind after a while. Luckily the game's humor is positively daft, and it's worth plowing through all those quests just to see what nonsense they throw at you next. One of the bosses is a giant bat named... Badbat, and other bosses take the form of crabs, giant feet, and trees. The goddess of time is fond of awful wordplay but then turns right around and mocks herself for it. Other characters make referential jokes about the game reusing sprites from earlier quests. It's impossible not to grin or even laugh out loud regularly while you play through this game.

This XBLA port features a full visual overhaul in HD, which is subject to taste. I found some of the art to be splendid and other parts questionable, but regardless of style or quality, there's something satisfying about seeing your hero wearing a barrel as a suit of armor, or decking himself out in snorkeling gear and flippers so he can cross a 16-bit waterway from island to island. The PSP version's original retro graphics are also still in here, if you prefer those. I appreciated their inclusion, but in some cases the sprites were blown up so big on a normal-sized television that they were kind of hard to look at and interpret as meaningful images. Your experience may vary. That's the nice thing about having options!

That "Super Hero Wars" multiplayer mode is just as weird as it ought to be, swaddled as it is in all this other lunacy. It pits you against other players to see who can make it through a given quest faster. But there are all these weird limitations in place. For instance, shops only have one of each item to sell, so you're even racing other players just to arm yourself. And only one player at a time sinks their money into resetting the clock, which benefits all players--but if nobody does it, everyone loses. So there are a lot of ways you can screw over the other players to get ahead in the race to beat the boss. (It helps if you cackle while doing this.) The multiplayer is oddly exhilarating, which is definitely a contrast to the slow baby-making jam that plays in the lobby where you set up matches against other people.

If you're interested in chasing after completeness (read: achievements), Super Mega Neo Climax has a neat setup that lets you keep track of what you have and haven't done. There are milestones for collecting all the extra weapons and armor, as well as partying up with all the available NPCs, and the game clearly shows your progress on those fronts on a per-mission basis. The path through the main quest branches more than once, so you can also easily go back and follow the other branches to see the quests you missed. And naturally there are leaderboards for getting better times on the previous quests, and the game rewards you for doing things like finishing 10 different missions in less than 30 seconds (real seconds, not turning-back-the-clock goddess ones).

A game that devotes itself so fully to its ridiculous premise deserves to be seen by more people, so it's great that Half-Minute Hero has reappeared with some nice enhancements on a service that more people have access to, and at a price point that doesn't preclude an impulse purchase. I don't know that the core concept has the legs to support a a sequel, but in the here and now I'm awfully glad this game exists. 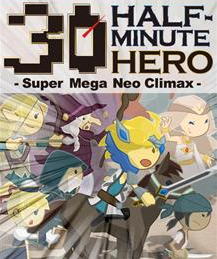