by Alex Navarro on March 15, 2011
Share:TwitterFacebookReddit

There is a moment in Homefront's single-player campaign that sums up the whole shebang in its entirety. You're walking with your fellow freedom fighters through what was once a baseball stadium, but now doubles as both an internment camp for American civilians and a dumping ground for their bodies. You stumble upon a group of Korean soldiers dutifully shoveling corpses into a mass grave. This is, of course, awful. Dramatic, sad music swells, and one of your compatriots begins to tremble angrily, and as his temper builds, he finally cracks, pulling his rifle and shooting blindly at any soldier he sees. Then all the Korean soldiers run and find cover, and you spend 20 minutes sluggishly shooting at them while your AI-controlled friends stand around, sometimes shooting, and other times blocking your path.

Homefront is a five-hour anticlimax. It is endless buildup toward horror and shock, constantly kneecapped by the developer's unwillingness to make good on its threats of emotional impact. Its "terrifyingly plausible" tale of an America overrun by a newly powerful unified Korean regime seems like the stuff of paranoid nightmare, the kind of story that certainly could make for a troubling, intense video game experience. Instead, developer Kaos Studios plays it safe, out and out refusing every opportunity to explore its own narrative and instead resting entirely on a series of dully standard shooting missions, periodically punctuated by scenes of terrible things happening to characters you've developed zero attachment to. Were that action of a more visceral and exciting quality, and not merely a generally easy, periodically frustrating, and largely uninspired copy of every other modern shooter of the era--with one particularly modern game of warfare among them--you might be able to forgive Homefront's disinterest in storytelling. Instead, excitement often eludes the game, and were it not for a small handful of genuinely interesting setpiece battles and a decent multiplayer suite, Homefront would be completely dismissible.

Homefront's story puts you in the role of a faceless, voiceless protagonist named Jacobs, a former pilot who finds himself rousted from his bed and shoved onto a makeshift prison bus by cruel and murderous Korean soldiers. It's the year 2027, and the United States is little more than a shell of its former self. An opening preamble combines real life footage of Hillary Clinton discussing the South Korean military boat sunk by the North with manufactured news footage featuring the rise of Kim Jong-Un as North Korea's new great leader, his reunification of the two Koreas and outward expansion into Japan and other vulnerable Asian nations, and eventual attack on America via an EMP weapon. This leads to an invasion of America's West Coast and irradiating of the Mississippi River, to keep American forces in the east separated from the armies in the west. All of this in just 17 years, and now you're on a bus headed to God knows where, while you watch innocent civilians--parents, in front of their children, even--gunned down by faceless soldiers of an invading enemy.

And then you go shoot some dudes.

After a daring rescue attempt by resistance fighters, you're whisked away, handed a gun, and told to just start firing away. While that makes some sense in the beginning, Homefront never breaks from this pattern of showing you something horrible (usually from a very safe distance) and then hurrying you off into a standard bout of duck-and-shoot firefighting. There are feeble attempts at emotional resonance, but for as much time as you spend with the characters in your squad of freedom fighters and seeing innocents beaten, bludgeoned, and shot to death, shockingly little impression is made. Characters appear and disappear frequently, making one wonder if the whole resistance is made up of like five actual people and some random extras. Flirtations with infighting--including tensions involving your Korean-American team member, and a sequence where a fellow fighter botches a launch of white phosphorus that kills as many friendlies as foes--are set-up and then cast aside. Opportunities for extrapolation, exploration, real emotion are constantly tossed away in favor of rote gunplay. Other, better shooters have found ways to marry their story and their action in creative ways. In Homefront, action and drama feel completely divorced from one another.

It's a shame, given the supposed involvement of writer John Milius, who co-wrote Apocalypse Now and both wrote and directed the Cold War paranoia cult classic Red Dawn. Who better than he to plug into the fear inherent to American culture of a sadistic invading army stepping foot on US soil? Who better to flesh out these characters, or at least give them some cheesily memorable personality? Either Milius' involvement is grossly overstated, or the guy has just lost his touch. At no point do you get any sense of gravity or reality in this story, nor do you get the kind of rah-rah, everyman vs. an evil army vibe so prevalent in Red Dawn. That movie certainly lacked realism, but it's chock full of standout lines and significant characters. Milius knows how to write dialogue. This is the guy who wrote the "Indianapolis" speech from Jaws, and the "Do you feel lucky?" monologue from Dirty Harry. The most memorable lines from Homefront? A Bruce Campbell reference, a Korean barbecue crack about some burning enemy soldiers (which really feels like it should have been followed by a sad trombone for maximum impact), and the time someone on my squad shouted about enemies occupying a Hooters.

That the action fails to pick up the story's slack is Homefront's greatest disappointment. We're used to games failing to deliver on their cinematic storytelling goals, but given the inroads made by developers in first-person shooting over the last few years, it's shocking how underwhelming much of Homefront's action truly is. Indeed, there are moments that impress. While the game is plagued by a dingy, often indistinguishable color-palette and crusty, blurry textures (which make the game's pervasively janky frame rate all the more confusing), Kaos Studios has managed to craft some appropriately decrepit and heartbreaking scenery to fight through--ruined, blood-soaked suburbs and an artillery-laden Golden Gate Bridge are particular standouts--and as you fight through them, the battlefields are rife with explosions, ambient gunfire, and a kind of controlled chaos; the kind you can trudge through without feeling like the shaky-cam and constant waves of enemies are throwing off your equilibrium.

On the flipside, few moments in Homefront feel truly dangerous. There is a constantly guided feel to the game's progression, not to mention a distinct lack of challenge. A few particularly intense firefights will lead to repeated death, but on the normal difficulty level, most missions are a breeze (the hardest level is an improvement, but not exactly gut-wrenching.) Most of this breezy feel is the result of the game's definition of "squad tactics." You're nearly always accompanied by a few other resistance fighters, and most times you're just following them around to wherever it is they decide to go. These cohorts aren't crack shots, but they're also invincible, meaning you can often just use them as temporary bullet shields, and following them will always result in you finding the best cover spots.

As much as that aids the game's ease of play, it also adds some frustration. That your AI compatriots take cover at all feels a bit like a cruel joke, since they can't get hurt. Ostensibly they're supposed to be real soldiers like you, so of course they'd want to use tactics to avoid getting shot. But then they take the best cover spots, and refuse to move out of your way while you're running around getting pelted by enemy fire. And while following your friends around makes for a bit of a brainless progression, periodic bouts of AI weirdness sometimes trap you in one spot. There are random moments where they just refuse to move for periods of time--the longest of which ended up being about half a minute--until some inexplicable trigger happens that makes them realize, "Oh, right, war is happening. Time to go!" Perhaps this is the developer's way of trying to pad out the campaign's disturbingly brief run time, which ends up being somewhere around four to five hours on the default difficulty.

Despite THQ's blitzkrieg promotion of Homefront's single-player story, the multiplayer is where it feels like most of the developmental effort went. Maybe the publisher was frightened of getting crushed by the all-absorbing multiplayer Akira monster that is Call of Duty, and perhaps with good reason. If you are a developer making a first-person shooter with a modern-ish setting and the usual slate of modes, it takes a Herculean effort to pull players away from the great time burglars of the genre. Homefront's effort isn't quite Herculean, but it's a good try.

Modes are all team-based, with a standard team deathmatch, and a ground control mode, where your team captures specific points on a given map. Battle Commander is a mode that alternates between these two match types, and also tosses in the benefit of an AI commander for both teams, which assigns special mission objectives and highlights players with particularly high kill streaks as threats. Meeting those objectives and killing off targeted players earns you bonus points.

Battle points are the game's currency, but they're spent in an unusual way. When you choose your class at the beginning of a match or right before a respawn, you see a number of other weapons, drones and other gadgetry that your class has unique access to. These objects can be purchased on the fly during the course of a game. So, say an enemy has jumped into a humvee and is coming barreling at your heavy weapons-class soldier. Now might be a good time to spend a few points and bust out a rocket launcher. Vehicles also cost points, so if you're particularly interested in flying a helicopter or driving a tank right over some unsuspecting players, it's best to save up your points.

The feel of the multiplayer is solid. It's fast-paced without feeling too arcadey, and the vehicles are easy to use and fun to control. The variety in classes occasionally lacks definition--the difference between a sniper and a heavy weapons fighter are obvious; others less so--but nearly all are fun to play with. There aren't a ton of maps, though one can probably expect more via DLC at some juncture--an all-too-obvious Alcatraz map, perhaps? The Xbox 360 DLC store is already replete with stuff, including such Avatar-focused gems as the Kim Jong-Il suit and glasses (each sold separately). Maybe it's just me, but that feels dangerously close to the territory of downloadable Hitler mustaches and Gaddafi robes.

Whether or not you decide to pick up Homefront should rely entirely on how much you want to play its multiplayer. It's not quite exciting or remarkable enough to trump the current giants of online dude-shooting, but it's a solidly crafted mode made comparatively impressive by just how tremendously mediocre the game's single-player campaign proves to be. Kaos obviously had ideas for this game, yet seemingly couldn't bring any of those ideas to total fruition. The end result is a brief, brittle campaign bereft of impactful storytelling or creatively designed action, one that ends not with a bang, but with the build-up to a bang, followed by a title card.
Alex Navarro on Google+
Load Comments 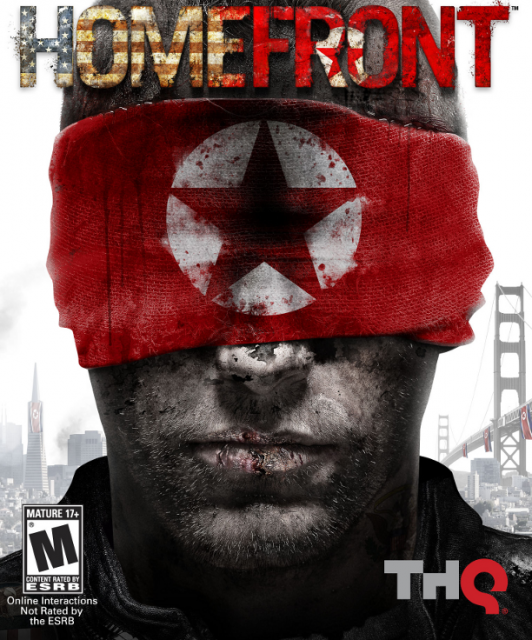