Welcome back to Miami. Where the beats are bumpin', the bass is thumpin', and the blood is pumpin'... out of your gaping chest wound.

by Alex Navarro on March 20, 2015
Share:TwitterFacebookReddit

Hotline Miami's thrillingly brutal gameplay is stretched to the point of breaking in this aesthetically pleasing, but otherwise disappointing sequel.

Hotline Miami was an exquisitely nasty good time. Its premise was simple: a killer receives phone messages from mysterious third parties, each instructing him to go to a place, enter, and kill everyone inside. How you went about killing everyone inside was left largely up to you. Every locale presented the player with a kind of homicidal brain teaser: What mixture of guns, melee weapons, and environmental kills can I use to most quickly eliminate every target without taking a single hit? Player death was frequent and encouraged, to the point where tapping on the level reset button morphed from repeated annoyance into reflexive action, a vital step in the game's intoxicating dance of death and dismemberment.

Hotline Miami also knew when to quit. Clocking in at just a few hours of play, the developers at Dennaton built Hotline Miami to be a ruthlessly efficient experience, focused primarily on getting the player in and out of each stage with minimal bullshit to distract from the core concept of blisteringly paced murdering. This is part of what makes Hotline Miami 2: Wrong Number a disappointment. This sequel is obsessed with enlarging everything about the original, often at the expense of said efficiency. Wrong Number bolts on considerable length to every element of Hotline Miami's design, and as a result feels bloated and out of sorts. Pieces of it periodically capture the spirit and energy of the original game--most notably the soundtrack and art design, which are as hypnotic as ever--but just as often, Hotline Miami 2 comes across like a meandering, more verbose retread of its predecessor.

That isn't to say that Hotline Miami 2 is bereft of excitement. There are moments peppered throughout the game's 26 scenes that match the level of disturbing (yet thrilling) frenzy Hotline Miami was so good at delivering. In those moments, the visual design, pulsating beats, and breakneck action all swirl together into blood-soaked delirium, reminding you of how Hotline Miami got its hooks in you to begin with. But those truly terrific moments are delivered inconsistently throughout Hotline Miami 2, and they're often book-ended by sequences that turn that psychedelic frenzy into teeth-gnashing frustration.

It's not enough to just say that Hotline Miami 2 is a more difficult game than the first. It's why the game is more difficult that negates a lot of the fun. Nearly every stage in Hotline Miami 2 is a great deal larger than anything in the first game, and along with that increased real estate comes a greater abundance of bad guys to take out. I said in my review of Hotline Miami that its level designs were just the right length, that "were each level to drag on just a bit longer, the game would give way to irritating repetition." That's essentially what's happened in Hotline Miami 2. Sussing out each floor layout takes many, many tries, and all too often you'll find yourself splayed out on the ground because you failed to notice a shooter in a far back corner that picked you off entirely off-screen, or because a dog that happened to blend in with the dim stage lighting caught you unawares.

It's stuff like this that makes Hotline Miami 2 more often a chore than a pleasure to progress through. Level designs often go heavy on windowed rooms, scaling down the number of useful hiding places you can use to plot your next course. And even when you are in a seemingly functional hiding spot, there's often some guy off in the distance that manages to snipe you before you even know he's there. Enemy AI is troublesome as well. Blast a nearby foe and watch as guys from three rooms away start bolting toward you, yet the guy in the room right next to you remains unmoved. You'll see enemies (especially dogs) get hung up in doorways, spinning around endlessly until you put them out of their misery.

Whether by design or not, Hotline Miami 2 too often works against the kind of freeform action that made the original so compelling. I'm not suggesting it's impossible to fly through Hotline Miami 2's levels--I've seen plenty of videos that show players briskly laying waste to hordes of enemies and scoring highly for their efforts--but the barrier to getting to that point is much, much higher this time around, and for my part, I didn't find it to be worth the effort. In Hotline Miami, I often found myself slamming dudes with doors, flinging weapons around, and pouncing for execution moves in bursts of movement that came almost without thinking. In Hotline Miami 2, I mostly found myself slowly peeking around corners, carefully examining every corner of the environment in the hopes of avoiding unseen shooters, locking onto enemies with the auto-target and trying to create choke points for waves of bad guys I knew would inevitably come running the second I let a shot ring out. In Hotline Miami, I could clear whole floors just using melee weapons, never using a gun for anything but a fling-able object. In Hotline Miami 2, I don't think I ever cleared a stage without using a gun unless the game specifically prevented me from using one.

This is the primary way that Hotline Miami 2 attempts to differentiate itself from the first game. It sets up its story through multiple character viewpoints, and builds its levels around specific abilities tied to each character. One character, for instance, can only punch people to death, whereas another can only use non-lethal attacks (and becomes an enraged psychopath if you do try to pull off a killing move). These variances in abilities take away a bit of the improvisational spirit of the original, though not entirely. There are still character specific perks tied to masks (or other objects) which can radically change how you approach a stage.

There's something laudable in the notion of forcing players to change up their style, to keep them from falling into a comfortable, one-size-fits-all approach. That said, it's an idea I like better in concept than in execution. I'll admit a certain satisfaction in running through a stage, obliterating enemies with fists perpetually akimbo. But having a character who can only use one gun (and only refill ammo at conservatively placed crates) is little more than an obnoxious barrier, and trying to move a pair of chainsaw-and-gun-wielding psychopaths around proved to be as profoundly irritating an experience as I've ever had in one of these games, thanks to the second character's predisposition to getting hung up on the scenery.

The game presents these characters as integral pieces of a larger, more convoluted fiction, all surrounding "Jacket," the deluded killer from the original. Some of the characters you play as include a reckless police detective, a true crime writer, the son of the Russian mob boss, an actor hired to play Jacket in the film version of the first game's story, a military operative fighting off a Russian invasion of Hawaii, and a gang of killers who consider themselves "fans" of Jacket's exploits. The story is told in nonlinear fashion, jumping from time period to time period as each scene metes out a bit more insight into how these various personalities relate to the events of the original game. However, the effectiveness of each story arc varies wildly. The nonlinear structure does the plot no favors in terms of coherence, but the bigger issue is that the game has little to say about anything beyond itself, and spends a lot of time saying it.

Hotline Miami's story essentially amounted to a loose assemblage of trippy imagery strung together by occasional moments of introspective guilt-tripping. Hotline Miami 2 tries to flesh those few dangling threads of plot out into a wordier, weirder saga, and the result is only rarely of any great interest. It presumes that players were dying to know about all the ins-and-outs of Jacket's backstory, where the mysterious 50 Blessings militia group came from, and just what it all means, man.

Whatever revelations Hotline Miami 2 has are largely self-indulgent, and what shocks it delivers feel mostly empty. Take, for example, the game's opening scene, a brief sequence of sexual assault that immediately flips into a reveal of movie set fakery. The scene was a point of controversy leading up to the game's release, and it comes with a menu prompt asking if you want to disable viewing it entirely. That this prompt exists is less an indictment of any outrage directed at the game, and more of the scene's necessity in the first place. It, alongside the majority of the "movie" section of the plot, feels entirely superfluous, a combination of disorienting fake-outs and cheap shocks that never amount to much. Other areas of the story come together better, but none of it ever approaches the elegant ambiguity of the first game. Hotline Miami 2 succeeds only in spreading out the fiction of the series, without ever improving upon it.

Leaden as the plot can be, Hotline Miami 2 is still incredibly effective at building atmosphere. The game's visual design builds nicely on the neon nightmare aesthetic Hotline Miami established, especially in the game's final stage, where the designers finally give in to Hotline Miami's psychedelic undercurrent and go full drug-trip in one of the most visually arresting scenes I've played in a long time. Even better is the soundtrack, which marks a huge improvement over the already excellent array of songs found in the original. Music was the motor that kept Hotline Miami's murder treadmill going, and Dennaton has curated an amazing list of songs for the sequel. It's a diverse soundtrack that spans multiple genres, but heavily leans toward that particular subgenre of electronica you usually hear in movies where a lone wolf cop is stalking a serial killer through a seedy, crowded dance club. As a standalone playlist, it's terrific, but it's even better in the context of the in-game action. 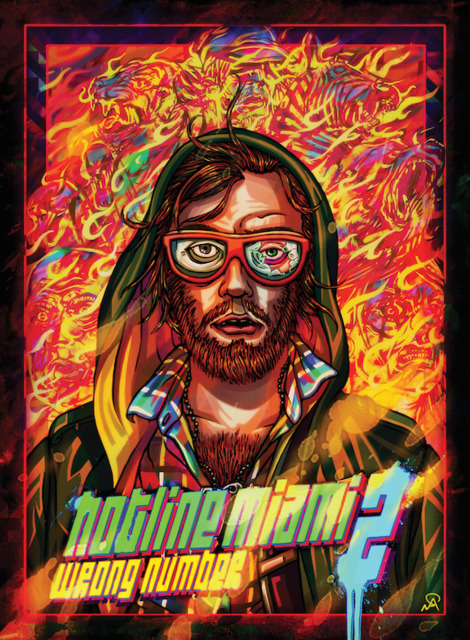