by Jeff Gerstmann on July 30, 2010
Share:TwitterFacebookReddit

Look past the dull single-player modes and get online if you want to have a great time racing boats.


Hydro Thunder's style of drift-heavy powerboat racing translates pretty well to Xbox Live Arcade in Hydro Thunder Hurricane. Hurricane's not quite a sequel, since it's developed by an entirely new crew, but it's a faithful update to the Hydro Thunder mechanics. With pretty good online play for up to eight racers and eight tracks to choose from, Hurricane's racing is a lot of fun.

Racing in Hydro Thunder Hurricane is all about learning the tracks to figure out where the best shortcuts are and collecting canisters of boost that keep you moving fast. You typically don't get much boost from one item, though, so you're sort of always on the hunt for more. All the while, you're racing against other boats that are trying to do the same thing, which usually means you're bumping each other out of the way at all times. It also means that everyone who wants to win is using one of the three expert class boats, which are faster than all the rest. Maybe the online would have benefitted from a class-lock option to force everyone into similarly built vehicles, but as long as you don't mind seeing six of the eight players in your race piloting "Rad Hazard" every single time, it's not a big deal. However, it does mean that you'll need to learn the tracks offline before you even think about winning an online race in the squirrelly expert boats.

Offline, you can race against artificially intelligent boats on those same eight tracks. Racing the AI isn't nearly as exciting as squaring off against real people, since the AI boats aren't especially aggressive. You just start at the back of a pack of 16 and need to work your way to the front before the race ends. There are also extra events that put you on the water by yourself and have to race through rings or avoid exploding barrels for online leaderboard times. Lastly, there's a championship mode that puts all of the single-player events together in multi-race chunks. I found the ring master and barrel-dodging gauntlet events to be extremely boring. Offline, you'll need to grind out credits to unlock boats, tracks, and events. Online, everything except the different skins for your boats are available immediately, so the unlock progression is a little needless. That said, it's weak that you have to place in the top three spots to earn any credits at all online. If the rise of persistent first-person shooting has taught us anything, it's that you should probably progress a little bit just for putting in the time.

Visually, Hydro Thunder Hurricane approximates the look of the original game. It's bright and colorful, the waves whip around, and there are lots of things going on in the background, like stealth bombers taking off or a giant viking doing... whatever it is that giant vikings do when they see a tiny boat race.

While I found most of the single-player modes to be a bit of a drag and the way things get unlocked for single-player could have been handled a bit more smoothly, the online multiplayer is what earns Hydro Thunder Hurricane its keep. It's a fast-moving and thrilling online race that offers just enough content to fit with its downloadable-sized pricing.
Jeff Gerstmann on Google+
Load Comments 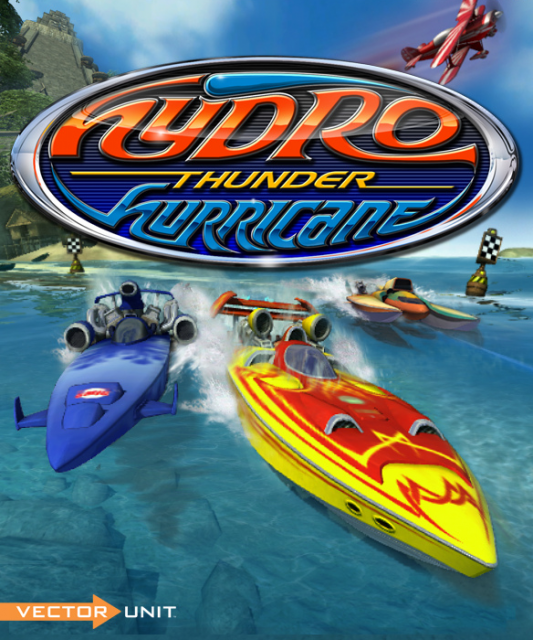