Injustice: Gods Among Us

Jeff and Ryan get downright divine in their application of DC Comics fists to DC Comics faces.

Injustice: Gods Among Us Review

by Jeff Gerstmann on April 16, 2013
Share:TwitterFacebookReddit

The most surprising thing about Injustice: Gods Among Us is how different it feels from Mortal Kombat, the previous game from NetherRealm Studios. At times, fights in Injustice look almost exactly like the sort of fight you'd see in MK9. The way the characters move and the cadence of the combos as fighters bounce and juggle each other around has a very similar vibe. But the way it controls and the way its various systems are implemented make Injustice feel like its own thing... and it's a pretty good thing, too. This DC Comics fighting game takes most of the modes from the 2011 MK release and rebuilds them around a lively roster of heroes and villains. The fights are flashy and full of personality, making the action stand out, and producing a spectacle worth seeing.

Parts of the Injustice fighting system feel like they were designed with an eye toward making the game a bit more accessible for people who aren't already well-versed in fighting games. This starts with its three attack buttons of varying strength. Then there's a character power button that activates something unique for each character. For some fighters, this is very simple. Superman, for example, does more damage when his power is active. Black Adam gets three spinning energy orbs that damage opponents that get too close. Some power up specific types of moves. Deathstroke gets longer bursts of gunfire when his power is active. Others act as stance changes, letting Wonder Woman switch from lasso to sword and shield.

From there, the systems start to get a little more dense, like a clash system that lets you wager portions of your super meter to heal or deal damage, or EX moves and bounce cancels that alter the properties of special moves or add a layer of combo potential, respectively. Also, unlike the Mortal Kombat games, Injustice's blocking system works when you hold back or down, rather than relying on a dedicated block button. No one part of Injustice's mechanics makes it too much to follow, but the game's deceptively simple attack buttons definitely give way to something with more depth and a higher learning curve. I also found it difficult to map all of its different buttons to a joystick in a way that felt natural and logical. You can configure the buttons however you like, so perhaps you'll find a setup that works well for you, but I ended up sticking with the standard gamepad. The game has an effective tutorial that illustrates how most of the systems function, but you'll need to get in and get your hands dirty to figure out when and why you'd want to use each of your available options.

If you're familiar with Mortal Kombat's list of modes, most of Injustice maps back to that game. The story mode takes the same sort of interactive movie approach, seamlessly weaving its way into and out of fights in a way that's still quite impressive a couple of years later. You'll control a handful of characters over the course of the story, which mostly seems to exist to answer the questions "why would good guy superheroes fight other good guy superheroes?" and "how do those not-so-superpowered heroes survive a good pummeling from the likes of Superman?" The answers aren't especially satisfying, but the multidimensional story juggles up the typical hero vs. villain alliances in a way that justifies having "evil" versions of a few heroes without seeming quite as ridiculous as the "they're infected with RAGE" plot that drove Mortal Kombat vs. DC Universe. It's not too far off from that G.I. Joe two-parter where they get sucked into an alternate dimension where the Baroness is a good guy, actually.

"Battles" is where you'll get your arcade-style ladders, with additional unlockable tiers that layer different modifiers onto the fights, like one that imposes a restrictive time limit or another that gives you a random character to control for each fight. Finishing the standard ladder gets you a character-specific ending. The S.T.A.R. Labs is the Injustice take on Mortal Kombat's Challenge Tower, giving you hundreds of different objectives to complete, be they blocking challenges or the simple task of winning a fight. This time around, each challenge has three different objectives associated with it, giving you extra stars (and unlocking more of the later challenges more quickly) for completing extra tasks. So, for example, you'll get one star for using Superman to avoid Catwoman for 20 seconds in one of the early challenges. But you'll need to land a four-hit juggle to get the second star and connect with two throws for the third... and if you get hit once, you fail the whole challenge. The advanced goals get pretty tricky, which makes it frustrating that there's a bit of load time and dialogue to button through each time you retry a challenge.

The online end of Injustice also builds upon the MK framework, giving up to eight players the ability to get together and fight in King of the Hill mode, which lets the players who are waiting and spectating vote on the current fight. There's also a lobby system that lets players meet up and chat before engaging in one-on-one, King of the Hill, or Survivor mode, which is essentially a King of the Hill variant where the winners don't automatically get all their life back between fights. You can also enter an online practice session, which is a pretty cool idea for players wanting to show each other some new moves. The online mode spews a ton of fun game-related data at you via a tip feed, letting you know how many capes have been destroyed, how many times specific objects have been broken in a level, and so on. You've seen this type of stat feed in first-person shooters before, but it's interesting to see it applied to a fighting game. By and large, the online works fine when you're playing against someone with a solid set of connection bars.

Injustice employs solid fighting systems that make it fun to play, but for many the main draw will be the game's wild super moves and destructible backgrounds. It's worth taking a break from the fighting for a bit to see Flash run all the way around the world to put a little more oomph into his punch or to see Batman run his opponents over with a remote controlled Batmobile. It gives the game a lot of cool, crazy flavor, even if they do start to get a little stale over time.

Injustice: Gods Among Us learns a lot from the last Mortal Kombat game, but it's not a simple clone of the developer's past work. Its unique fighting system, deep move lists, and practice options give you something to learn and places to learn it. I rolled my eyes more than a few times during the story mode, but the ridiculous super moves offset that stuff and make it a pretty good time. 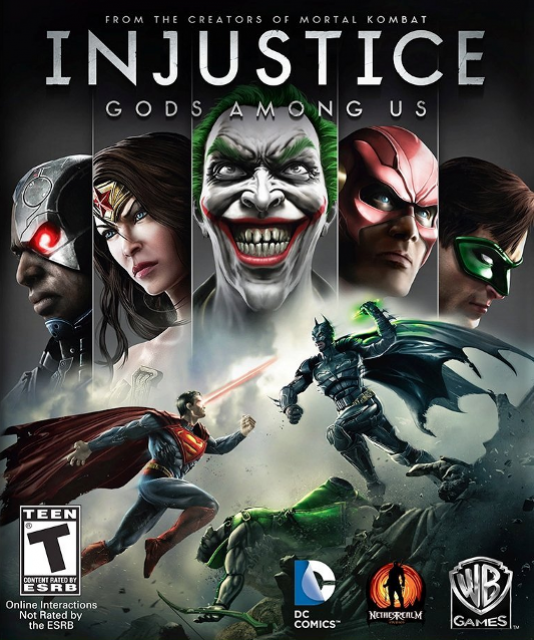