by Jeff Gerstmann on June 22, 2011
Share:TwitterFacebookReddit

Double Fine's recent forays into downloadable territory have been solid vehicles for clever comedy, and that's the primary reason why you're there. The games have been short, solid, and sharp-witted. Trenched keeps the same comic sensibility that you've come to expect from these releases, but the game that backs everything up is an exciting-but-brief piece of multiplayer action that feels well-balanced and reasonably deep. While it could be a bit better at exploiting that depth, Trenched is a great mix of funny and fun mech combat that's great while it lasts.

The story is that two soldiers, manning a communications outpost after receiving wartime injuries, stumbled onto some kind of mysterious broadcast that made them super-smart. With newfound abilities at their disposal, one went and invented "mobile trenches," which is a silly word for "mech," and the other went the dark route and became obsessed with spreading the broadcast to the world. Vlad, the evil one, makes monsters out of televisions screens called Monovisions, and the different types of monos make up the enemies you face while piloting your trench, dropping turrets, and protecting various targets.

Most of the 15 missions in Trenched are defensive in nature, which is where the comparisons to tower defense games come in. There are one to three structures in each level that you must defend from wave after wave of enemies. Your first line of defense is probably your trench itself, which can be customized with various weapons, chassis, legs, and so on. Outfitting machine guns onto your trench gives you a pretty direct way to impact the enemy, but in some cases, you'll want shotguns, or perhaps large sniper cannons or gigantic artillery guns are more your speed. Trench customization is key to your success in each mission, and the game gives you helpful tips about the things you'll need to win.

One of the other ways to customize your trench is to pick which emplacements you'll take into battle with you. These are various turrets that you can plop down just about anywhere on the map. Most of them are pretty straightforward. Shotgun turrets take out ground-based enemies, flak turrets watch the skies, and machine guns can handle both. Sniper turrets and minelayers give you some additional weapon-type turrets to bring out, when you need something a little extra. There are also support turrets, such as dampeners that slow down enemies when they enter the turret's range. This sets up the classic tower defense strategy of slowing enemies down so that your emplacements can really pound on them while you mop up the rest with your mech's weapons.

It's certainly possible to play Trenched by yourself, but it's better with others. Up to four players can get into the game at once via Xbox Live, and once you get comfortable with the weapons and know what to expect out of the levels, an experienced team of players can clean up without taking much, if any damage along the way. As you play, you'll gain experience and collect loot, giving you a reason to revisit levels, but you'll probably hit the highest level--10--after six hours or so. This doesn't mean you'll have access to every part, though, so if you're a completist, you still might find plenty of reasons to keep playing Trenched's levels again and again, because the various weapons and loot you get is usually great. It's also where most of the game's comedy is found. Trenched does the "clever item descriptions" thing exceptionally well, even managing to throw in a trio of wonderful Insane Clown Posse gags along the way.

The items themselves are worth checking out, too. The game does well with stats, letting you see things like range and damage for all the different weapons while you're building your trench. But some weapons also come with additional effects, leading to machine guns that also emit flak to make them more effective against aerial targets. Or artillery shells that hit the ground and cause area of effect damage for a few seconds after impact. Or shotguns that shoot slugs, turning them into smaller sniper rifles for chassis that can't handle the big guns. You'll also get upgraded chassis as you play, giving you more armor and a variety of types that almost serve as classes. The engineering chassis only have a couple of weapon slots, but can take more turret types into battle. Assault chassis, on the other hand, let you load up with weapons, but you'll only get a couple of weaker turret types to take with you.

The game also dabbles in social elements by putting your recent teammates into a regiment. Between missions, you'll get updates on the stats that your regiment has put together, and some unlockable items and challenges hinge on meeting certain regiment goals. Also, between missions, you can run around the deck of a ship and salute each other like crazy. You can dress your marine in different clothing, and the hats confer different saluting animations. It's the right kind of goofy inclusion that feeds in just a little bit more charm.

The downfall of Trenched is that you unlock all of this great stuff, but don't have a ton of opportunities to face tough opposition once you get to the end. The lower levels are a breeze once you've unlocked better gear, and most of them are built in such a way that you want to take specific things into each mission, rather than just loading up with the most savage gear you've got and laying waste to everything. Also, the menus that you use to customize your trench aren't so good, so changing out your chassis, legs, and weapons between each mission takes a little longer than it probably needs to. Once you get used to its particular quirks, it's not a huge deal. Also, the game's frame rate can get a little rough when you've got four players shooting off weapons at the same time.

For something that sounds like such a simple combination of existing genres, Trenched comes together surprisingly well, and it's the way it plays and controls that makes it all work. Shredding the different enemies with your varied arsenal is quite satisfying. It'd be a thin experience if you were looking for something to play by yourself, but if you like to just saddle up with friends and blast things apart, Trenched is a strong download. 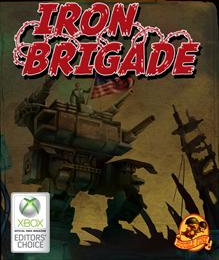