Vinny infiltrates the Soviet consulate with the aid of pigeon-scented perfume. Then things get weird.

by Alex Navarro on February 7, 2014
Share:TwitterFacebookReddit

It's a rare, but fantastic thing to find a game that feels like the result of a singular artistic vision. To find one that also happens to be a genuinely comic vision is like tripping over a unicorn. Playing Jazzpunk, from developer Necrophone Games, was like tripping over a unicorn who just happened to share my particular appreciations for goofy puns, technological ephemera, and Saul Bass. This is a clear and coherent vision of absolute nonsense, a work of pure absurdism glued together by a consistent, deadpan delivery and a perfectly curated visual style. It signals from its opening minutes precisely what's in store for the player, yet still finds ways to surprise and delight you through moment after moment of concentrated ridiculousness. Put more succinctly, Jazzpunk is probably the funniest game I've played in a long time.

In it, you are Polyblank, a sort of freelance spy for an agency that runs espionage jobs for just about anyone, it seems. Your shifty drunk of a boss feeds you Missionoyl pills to send you out on assignments that always sound like spy game boilerplate on paper, but descend into complete and utter insanity almost instantly upon your arrival. Describing that insanity is challenging, because so much of Jazzpunk's comedy comes not from individual conversations or situations, but from the breakneck pace at which it fires off the stupidest, most unpredictable happenings it can muster. Think of the rhythms of comedies like Airplane! or The Naked Gun, but with a far more brazenly psychedelic bent.

What's impressive about Jazzpunk's unusual brand of comedy is that it actively lets the player participate in the nonsense happening around them. Funny things aren't just said and done in front of you. You are invited to poke and prod at every strange piece of this world until every ounce of funny has been extracted. In some respects, Jazzpunk resembles something like Gone Home, or Blendo Games' Thirty Flights of Loving. It's more about exploration and interacting with the world than straight-up task achievement. Each chapter of the game has specific objectives that must be met to proceed--steal back tech stolen by the Russians, acquire a cyber-kidney currently embedded in a mark, steal a briefcase from a vacationing target, and so on--but just going straight for those objectives misses the larger point of the game.

In the first mission, I spent nearly 30 minutes just talking to the many crazy idiots that populate the world, performing bizarre side jobs for them, uncovering unseen minigames, and trying to touch every single touchable object to see what strange thing would pop out of it. What does pop out could range from one of a long list of peculiar lines of dialogue, to a playable, matrimonially-themed first-person shooter called Wedding Quake. Jazzpunk throws non sequiturs at you from every which way, and does so at such a rapid clip that there's scarcely ever time to process what you've just wandered into.

And yet there is, astonishingly, a cohesive feel to all of this. Throwing a million silly gags out every which way is no surefire way to create successful comedy, but Jazzpunk manages to keep things unpredictable while retaining a sense of pace and rhythm. There is a consistency to its delivery, an unexpectedly focused style that makes all this more than just a bunch of thrown together funny-sounding words and visuals. Its aesthetic is coherent, if entirely odd, mixing together Cold War-era pop culture imagery with belligerently delivered spy movie tropes, and characters who all look like gender designations on restroom signs. It's all completely nuts, but in an extremely, amazingly specific way.

Perhaps because it involves the player so heavily in its punchlines, Jazzpunk mostly keeps things very simple. Those minigames? Never terribly difficult, nor deep. Those mission objectives? Usually quick and easy to accomplish. Also, you can't lose the game under any circumstances. That simplicity prevents any joke from being kneecapped by frustrating gameplay, but it also makes progressing through it a breeze. Playing with an eye toward finding every gag will probably take just a little under three hours, but it's not too likely you'll find all of them on your first play through. I happily went through Jazzpunk a second time, and found at least a half-dozen things I'd completely passed by the first time around. Even more importantly, I didn't mind playing through the jokes I had already seen a second time. Even without the surprise factor, they were still funny. That's a mark of any great comedy, regardless of what medium it originates from.

To describe any more of Jazzpunk would be to its detriment. It's best experienced unawares, so that the full weight of its weirdness can be imparted without the burden of expectation. Suffice it to say I think just about everyone should play Jazzpunk, though I'll concede that its specific brand of humor might not jive with everyone's sensibilities. Frankly, you can watch just about any two minutes of Jazzpunk and probably know right away if it's for you or not. Every individual gag is its own bizarre thing, yet still feels like an accurate encapsulation of the greater whole. It takes a strong, creative, thoughtful comic voice to pull something like that off. In Jazzpunk, Necrophone Games has demonstrated that it has that voice, and it deserves to be heard. 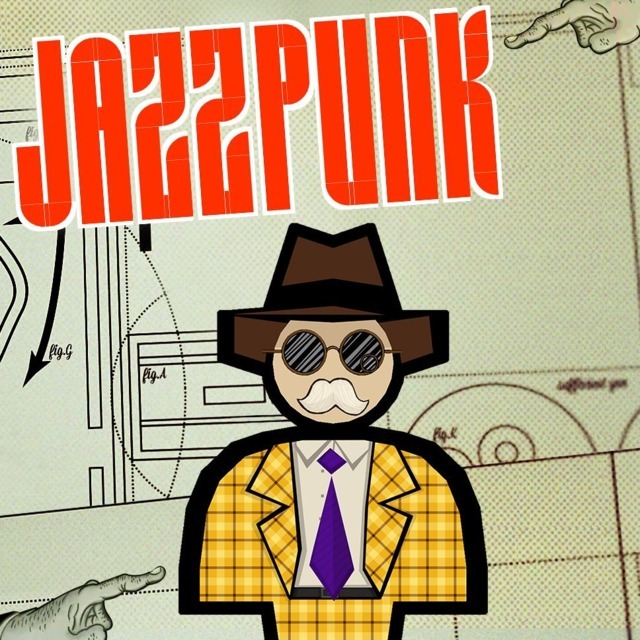