by Ryan Davis on October 24, 2011
Share:TwitterFacebookReddit

A terrific, varied soundtrack, plus some conceptually interesting new community features get marginalized by gameplay that is demanding and indifferent in equal measure.

Leading the crest of the current wave of post-DDR dancing games, Ubisoft established a pretty strong mass-market following with its Just Dance series on the Wii. As you might imagine, trying to mimic the on-screen choreography with just a regular Wii Remote in your hand to register the dance moves didn’t provide terrific fidelity. The gameplay was more of a timid suggestion than an outright mandate, and the games were more functional as living-room soundtracks than actual games. It’s an issue that you’d hope would be addressed as the series transitions to the technically superior Kinect with Just Dance 3, and while it’s an improvement, it still falls well short of the platform standards set by Harmonix’s Kinect launch title, Dance Central. Which is a real shame, because there’s a ton of songs featured in Just Dance 3 that--were the game’s motion detection able to keep up with the choreography--would be a lot of fun to dance to, as well as some ambitious multiplayer and community features that, quite frankly, deserve a better game.

If just dancin’ is all you’re interested in, you can hop straight from the main menu into a big list of songs, all playable from the get-go. Just looking at this list, it’s easy to get excited, assuming you’ve got a taste for popular dance songs from the past 30-plus years of pop music, with an emphasis on the past decade or so. Current artists include The Black Eyed Peas, Cee Lo Green, Katy Perry, and LMFAO, and the hits stretch all the way back to Aretha Franklin, Earth, Wind & Fire, A-ha, and C+C Music Factory. It’s a populist playlist with lots of one-hit wonders, but it would seem that the first step in getting players dancing is giving them plenty of songs they already know. As with previous Just Dance games, the dancers you’ll be imitating are digitized videos of actual dancers, usually in thematically appropriate wardrobe, and everything’s been pushed through a glowing neon filter to give it a weird candy-raver vibe.

Some songs feature choreography that supports more than one player at once--up to four, depending on the song--and these group routines often have unique moves for each player, as well as interaction between multiple players. Regardless of the number of players you actually have, the choreography can be pretty ambitious. Though you can always choose to play on either easy or normal--which requires you to move either just from your waist up or your whole body--and each song comes with an intensity rating, you have to sift through the big list to find the easier stuff, and once you’re in a song, you’re not given great direction on the upcoming moves. That learning a full dance routine takes some repetition shouldn’t be too surprising, I suppose, but Just Dance 3 does a rotten job of easing you into it, providing minimal feedback if you’re doing it wrong. There seems to be very little crossover in dance moves from one routine to another, which makes each routine rather unique, but it also means that what you learn in one routine rarely caries over to the next, like you’re starting from scratch every time.

The real fundamental problem, though, is that the dance routines are just too complex for the Kinect to keep up. You might expect that this means the game has trouble registering your moves correctly, and that definitely does happen, but more often, it will just give you a pass, so long as you’ve got the basic idea. Actually, even “the basic idea” is being generous, as I managed to score decently on songs doing The Carlton the entire time, or just sitting on my couch, waving my arms around. It’s far too lenient, stripping what little motivation you might have to learn the actual routine. It’s even apparent from the game’s twitchy menus that the developer was still wrestling with how to get the most out of the Kinect when it shipped Just Dance 3.

That's kind of a shame, because outside of the fundamentals, there are some promising ideas in the game’s Just Create section. You can record your own routines, which the game actually does a pretty good job of compositing and rendering to look like the in-game dancers, then upload them for others to dance along with. You can also record yourself dancing one of the game’s predefined routines, which, upon playback, the game will then superimpose on the regular dancer, with the notion of providing you with some insight into how you can improve your routine, though I didn’t find this mode particularly useful.

The Just Dance series feels like it’s headed in the right direction with Just Dance 3, but it still has a long way to go. If you were satisfied with the Just Dance experience on the Wii, and you find the soundtrack to Just Dance 3 appealing, you probably won’t be disappointed. But you should know that you can do better. 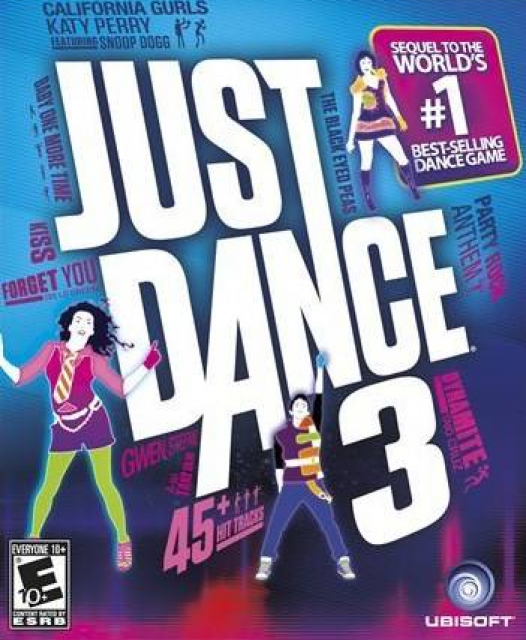