by Alex Navarro on November 12, 2010
Share:TwitterFacebookReddit

The quality of the games and implementation of the Kinect technology in Kinect Sports make this sports-themed minigame collection more than just another genre also-ran.

I think it's safe to say we can all blame Nintendo for thrusting the once barely-existent sports minigame collection into the limelight as the benchmark by which all motion-controlling technologies are judged. After Wii Sports, publishers went bananas all over this genre, and with the launch of the Move on the PlayStation 3, as well as Microsoft's Kinect, we have ourselves myriad miniature sporting games to sift through. I don't really know if making painstaking judgments about which game/system features the superior rendition of table tennis is really the way to be properly stacking these technologies against one another, but at the very least, the publisher-produced versions of these games do tend to make for solid showings of the technology they're built around, and can occasionally be pretty fun to boot.

Kinect Sports is Microsoft's stab at the genre for its newly released motion-tracking camera. Developer Rare shows that it has a fairly firm grip on the Kinect tech, creating a solid variety of sporting minigames that each require unique and energetic movements from the player. This is one of those games that pretty much requires additional players to really be worth your while, but if you do have some companions to play with, Kinect Sports can be precisely the kind of riotous party experience you would want from this type of game.

Six basic games are included in this package: Boxing, beach volleyball, table tennis, soccer, bowling, and track and field. Actually, track and field is a competitive suite made up of five smaller games--javelin, discus, hurdles, long jump, and sprint--so I guess you could say there are technically eleven games. And, now that I think of it, the game also includes "minigames" versions of the, erm, minigames, with differing rule sets--how many bowling pins can you knock down in a set amount of time, how many times can you return the ball in table tennis, etc.--so, OK, let's just say there's a bunch of different games to play around with.

Kinect Sports has the benefit of being one of the more solid demonstrations of the Kinect technology, in terms of functionality and fun. All of these games work as intended, with only a touch of noticeable input lag, and do so in ways that are almost immediately intuitive to the player. Want to throw a discus? Wind your arm back, and fling it forward like...well, you were throwing a discus. Hitting a ball in table tennis, throwing a bowling ball down the lane, punching a dude in boxing, all this stuff works in ways that, were the helpful tutorials not there, would mostly make sense from a practical standpoint. Even the slightly more abstracted stuff, like sprinting or long jumping, makes sense as you simply run in place and jump in the air when required. The only game that is maybe a little too abstracted for its own good is soccer, which is less a game of soccer and more a game of you standing in place, and kicking the ball toward another player, eventually getting the goal. Again, it works fine, but it's not a great deal of fun.

Still, that's one blemish among a group of games that are largely a hoot--at least in a multiplayer scenario. The single-player experience in Kinect Sports is a touch lacking, sadly. It's not that the games don't provide an ample challenge to the solo player. In fact, if you crank the difficulty up, you can get into some really tough games against the computer--perhaps a little too tough once you get up to Champion difficulty. It's fun to feel challenged, but when you're getting regularly smoked by a computer opponent that knows how to nail practically every shot in volleyball and can bowl like eight or nine strikes in a given game, your enjoyment tends to flatline.

But in multiplayer, that's far less of a concern, and really, that's how these games are meant to be played. As with other Kinect titles, the game can only handle two players on screen at once, but there's a nice array of competitive and cooperative options for various games across the board. Want to play some cooperative doubles table tennis? Or just punch some people in the face online? You can, and should.

I'll go so far as to say that the genre of sports-themed minigame collections probably isn't capable of really being revolutionized, but Kinect Sports gets dangerously close, simply by virtue of doing the one thing other motion-controlling technologies haven't been able to yet: Tracking your feet. This is far more of a full-body workout than something like a Wii Sports, and best of all, it's a fairly fun workout at that. It would be entirely understandable if seasoned players who have already run the gamut of previously released mini-sports titles like this one might balk at the notion if picking up yet another one. But if you've invested in a Kinect and you're looking for a nifty, well-put-together party game to show off your fancy new gadget, this is about as good as anything you're going to find in the system's launch lineup.
Alex Navarro on Google+
Load Comments 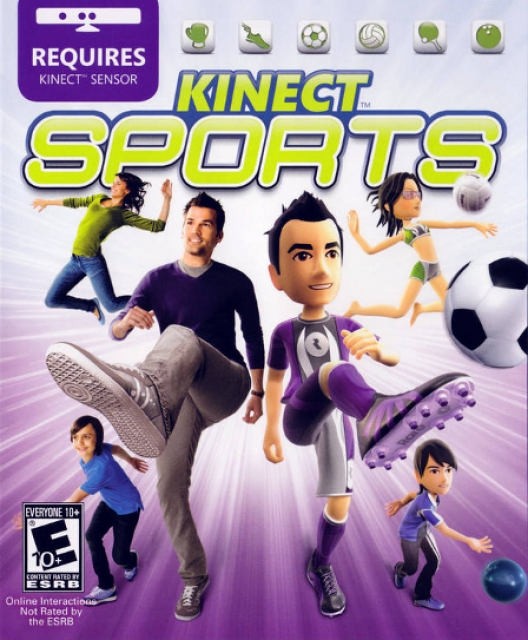