by Brad Shoemaker on June 29, 2012
Share:TwitterFacebookReddit

Some of Lego Batman 2's new ideas work better than others, but at least this isn't just the same old Lego game.

Lego games have been in need of a significant overhaul since Pirates of the Caribbean more or less perfected the existing puzzle-action formula last year, so Traveller's Tales deserves at least some credit for pushing things forward a few baby steps with Lego Batman 2: DC Super Heroes. Far from a dramatic reimagining, this sequel still leans on the same style of character-switching and Lego-busting action that's anchored every Lego game in this series so far, but now these levels are bound together with a quasi-open-world hub level that gives this game a slightly different flow than all the ones before it. Also, now the Lego people talk. They talk! Those two changes add some new life to the well-worn Lego formula, though they won't be nearly enough to reel you back in if you've already had your fill of the specific Lego brand of action.

To be fair, DC Super Heroes isn't saddled with simply retelling the plot of a movie you're already overly familiar with, but still, you'd be surprised how much some real, actual speech enlivens the proceedings and creates some impetus to push the storyline forward. The dialogue is generally sharp and reasonably funny, and the plot gets a good bit of comedy mileage out of the somewhat contentious rivalry between Batman and Superman (something that I, as a comic book naif, was completely unaware of). Plus there's a giant robot Joker.

These games are usually good about doling out new characters to play with every level or two, but Lego Batman 2 feels oddly lopsided in that regard; it's only in the last half-hour of the story that you get a chance to use anyone besides Batman, Robin, or Superman, and even when characters like Green Lantern, Cyborg, and Wonder Woman show up at the very end, they only rehash the same powers you've been using the entire game with the primary trio. To be fair, Batman and Robin have access to a number of suits with different weird abilities, and the level design is good about making you (and possibly a friend) leapfrog back and forth between characters to clear obstacles that require specific powers. Also, as boring as I think Superman is as a character, he's downright amazing in this game since he's invincible, he flies, and he has most of the powers of all the other characters. That's refreshingly liberating.

The gigantic hub thing is where you pick up most of your extra characters. Before this game came out, when word was going around that "they made it open world!" and such, I got pretty excited. Who doesn't love a good open-world game? But that's really not what this game is at all, and ultimately the big open hub got in the way of my enjoyment more often than it enhanced it. The individual action levels still require you to load into self-contained areas, so it isn't like you're playing the story bits in Gotham itself. There's a pretty good amount of trivial side content scattered around the city--villains who you can fight to gain them on your roster, citizens who need help, and little urban traversal challenges that reward you with gold bricks--but none of it on its own is all that engaging. More damningly, the open city hub is just a chore to navigate. There's no permanent minimap--you have to drop to a menu every time you want to see the actual layout--and the onscreen compass is a poor substitute, as it's loaded with unlabeled icons that stack on top of each other and offer no reference point as to what any of the symbols actually mean. Vehicles aren't always easy to come by, and the frame rate got bogged down pretty often in the 360 version I played, so navigating the world generally felt less pleasant than you'd want it to.

Then there's the core of the Lego experience, the clunky feel of which hasn't really evolved much at all. While the gameplay in these games has always been a bit rough from a nuts-and-bolts standpoint (though somehow endearingly so), I still wish Traveler's Tales would put a little more work into the basics of moving and fighting and so on. You run into a few too many instances of puzzle elements not activating because you're not standing in exactly the right place, or your character getting stuck on some wonky level geometry, or some other annoyance. I had Batman get stuck in a section of one particular level for about five minutes at one point, preventing me from progressing until he magically teleported up to where my other characters were for no apparent reason. The game is still plenty playable, but we've seen so many of these games that it's time for those rough edges to be sanded down (and surely they will be on the next console hardware, if not before). I'd be more willing to forgive a little clunk here and there if the open city were more successful, but it is what it is.

There's an undeniable charm to Lego Batman 2, from the pithy superhero banter to the nonstop swells of the old Danny Elfman Batman theme from the Tim Burton era (and let's be thankful the developer stuck with that Batman, instead of trying to shoehorn the brooding Christopher Nolan version in here). The game is still full of clever little uses of the Lego itself, such as waterfalls and fire effects that are made out of Lego studs, and that big Joker robot that looks like it's a real-life Lego set just waiting to happen. If the fundamentals were a little more refined or the new ideas a little more fully implemented, I'd feel better about recommending it wholeheartedly, but given the new elements in play here, you can at least take heart that Traveller's Tales isn't resting on its laurels. 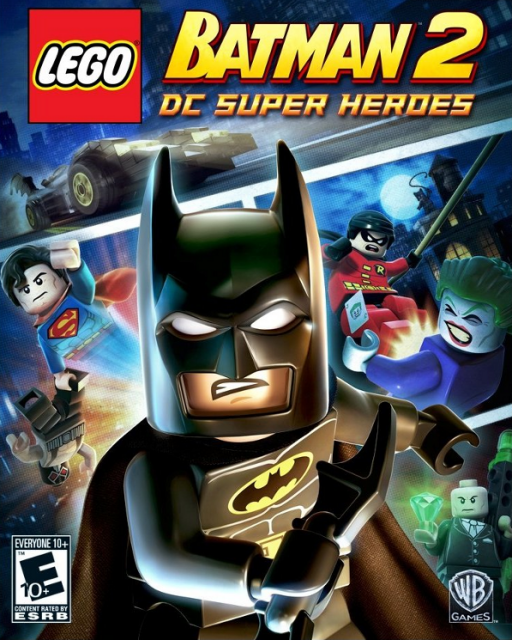