by Alex Navarro on August 27, 2012
Share:TwitterFacebookReddit

The ideas behind Madden NFL 13 are great ones. It's the execution that lets this year's installment down.

I lamented about last year's Madden installment that it was merely "fine," that it did enough things to be a new game compared with its predecessor, but that was about it. I decried the lack of interesting new ideas behind it. I can safely say that none of these criticisms can be lobbed in the direction of Madden NFL 13. Whereas Madden NFL 12 felt lackadaisical and directionless, Madden NFL 13 paints a very clear vision of where the series is headed from here.

Where Madden NFL 13 ultimately stumbles, sadly, is in its execution. There are new ideas here, great ones even. But those ideas don't translate especially well into this year's game, coming off as either half-baked, or simply not reasonable by modern console standards. This is a game that tries to do a lot of things with a lot of different modes, gameplay concepts, and engines, many of which haven't really seen any significant overhauls in years. As a result, Madden NFL 13 often feels more like a beta version of a much better game to come, than a fully fleshed-out title in its own right.

Nowhere is this more apparent than in Madden's new physics system. EA has taken the Infinity Engine and stapled it onto Madden's collision detection, resulting in what should be a more natural-looking tackling system. Unfortunately, there's nothing natural-feeling about it. The one thing it does do well is that player models feature even less suction than before. Nobody looks magnetized to each other when they hit. Occasionally the ball still looks like it lands in a receiver's hand by way of divine intervention, but by and large everything looks like it's happening in real time.

Unfortunately, what happens in real time doesn't look especially good at all. Collisions often result in grotesque bending of limbs and spines that, perhaps in another football game, might be accompanied by an x-ray closeup of bones snapping. Except that's clearly not EA's intent here. Rather, it's the engine trying to make the player models move naturally based on where the hit is coming from. So you get guys basically being folded in half at the lower back, and then just gingerly popping back up, only to trip over another grounded teammate. That's another strange thing about the engine: it apparently doesn't understand the difference between mild stumbling and a straight-up pratfall. Every time a player trips or even just walks too close to another player on the ground, they stumble to the ground like they've been pushed over. I had three guys all do this at the same time during one especially peculiar kickoff. It's just bizarre.

Thankfully, this doesn't have any real impact on the field, save for a few minor hits occasionally resulting in overly strong reactions from ball carriers. However, whenever the game cuts to a replay, you get to see basically every single problem with the physics engine highlighted with long, luxurious looks at every robotic reaction animation. As guys fall to the ground in slow motion, they look like they're popping and locking the whole way down. It seems as though the physics engine can only react in very specific timing increments, resulting in these labored looking movements. Unrelated but similarly strange is the game's propensity toward massive, out-of-nowhere frame rate hitches. I don't mean slowdown, but literal freezing of the screen for a few seconds at a time. It's almost like in an online game, when lag requires the game to pause to resync, except this happened to me several times in offline games. I also got at least one crash on a loading screen, and this was with a retail copy.

Still, while the visual and physics engines are left wanting, the core gameplay is still pretty good. Blocking and interacting with blockers feels particularly good this year, as does the running game. Purportedly there are some new variations in the passing game when it comes to throwing directions and such, but even playing last year's game and this year's back to back, I could barely feel the difference. It's also worth noting that interceptions are especially prevalent this year, though that's not through a computer cheat. It's just easier to time interceptions as a defensive back now, so users who like playing the receivers will have an easier time picking off wayward passes. I wouldn't call it cheap, necessarily, but it certainly pays to be a bit more careful with your passes this year.

The other major overhaul to Madden NFL 13 comes in its mode selection. Franchise, online franchise, and superstar modes have all been sandwiched into one ungainly career mode called connected careers. Here, you can choose to be a coach or a player, offline or on in a franchise of your design. Want to coach an offline squad the old fashioned way? That's still an option. But if you want to, say, create an all-Quarterbacks league online with your friends, that option's there too.

It's a broadening of the experience that makes a lot of sense, but lacks a bit in the execution this year. Mostly, issues with the user interface tend to be the culprit. Franchise functionality especially becomes more cumbersome this year, due to free agent and scouting menus that aren't always as clear as they should be. For instance, the free agent menu allows for bids on players in the off-season, but there's no clearcut way to see what other teams have bid, nor how your bid ranks on the player's interest level. There is a small menu on a player screen that shows you a player's interest level, but it never seems to be right. I bid on four free agents, one of which had high interest, and three of which had very low interest. All of them accepted my contract offers, most of which were below their original asking price.

The new XP system also seems kind of pointless. You can earn XP by reaching specific milestones each game, or by practicing with your team. However, the XP bonuses you gain are so minuscule that they border on worthless. Upgrading your players takes so long that most players will be gone from your squad, either in free agency or retirement, long before you have any meaningful impact on them.

It's a shame, because I like where these modes are headed. Creating an interconnected experience with the offline and online modes is a tremendous accomplishment in its own right, especially considering how woefully disconnected all this stuff has been in the past. The UI and mode designs just need to catch up with the technology next time around.

The last element to see a significant overhaul is the on-field presentation. Inching ever closer to that "real TV broadcast" feel, CBS Sports personalities Jim Nantz and Phil Simms replace last year's mostly miserable commentary tracks with more leisurely, more insightful commentary of their own distinct flavor. Mostly this stuff is fine, accurate even, considering Simms is just as dull in the game as he is in real life. Some lines repeat too often, and Nantz makes some inaccurate calls from time to time, but by and large, this is an improvement.

ESPN has also gotten in on the act via the connected careers mode. ESPN anchor Trey Wingo narrates an introduction video that (poorly) explains the new features in this year's game, and does much of the talking during the new live draft. This is the one aspect of the franchise that really improved this year, with a much more TV broadcast inspired presentation that is pretty easy to work with on the UI front. Wingo is perhaps a bit overly wordy when describing prospects, often leading to a lot of bleed-over dialogue as you skip through picks, but generally his presence is welcome. Hell, even the fake Twitter accounts for the likes of Mark Schlereth and Skip Bayless is kinda neat, though EA probably ought to license a few mainstay accounts like Rob Delaney and horse_ebooks next year, just for authenticity's sake.

Tragically, EA has taken this push toward TV-style broadcasting to also include some of the most egregious in-game advertising seen in ages. EA Sports titles in particular have always been EA's go-to division for funneling ad content, since we see ads in sports all the time, so it's fine! Right? No, not right. While the need for alternate revenue sources is understandable, having Jim Nantz insert three Papa John's pizza mentions in a single game is just outright shitty. Have as many stadium billboard ads as you want, but dear god, if I have to see the email address for the Official NFL Pizza Sponsor plastered on my screen one more time, I'm throwing this disc out the window.

All of this considered, there is enough here for die-hard football fans to enjoy. In spite of its misfires and glitches, Madden NFL 13 is a step forward for this franchise. It's a small, clumsy step, but considering how little forward progress this series has made in recent years, any kind of step is a cause for minor celebration. If you can forgive the technical problems and often cumbersome menus, there's a football game worth liking here. 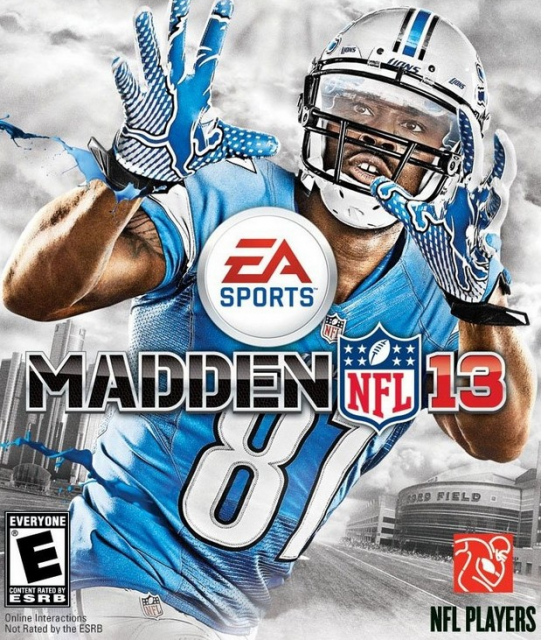