This year's Madden has some interesting new tweaks and our resident football enthusiast is ready to reveal them all! Then he trounces me.

by Alex Navarro on August 27, 2014
Share:TwitterFacebookReddit

It's got its share of holdover problems, but Madden NFL 15 at least represents a positive step forward for this series.

The last time I really found myself enjoying a Madden game was Madden NFL 11. That was four years ago, which is ages in annual video game franchise terms. Madden NFL 15 marks the first time in a good long while that a Madden game left me feeling positive about the experience. It's not because this year's game offers up any one big, awesome new feature that sets it markedly apart from the last few entries. Instead, it takes a lot of the good, if clunky ideas from the last couple of games, and finally molds them into something that feels simultaneously exciting to play, and (mostly) technically sound. There are still problems, to be sure, but for once, those issues are outnumbered by positives in a significant way.

The biggest changes in Madden NFL 15 fall on the defensive side of the ball. Plenty of Madden installments have proclaimed to "fix" defense, usually by adding some new mechanic or stick functionality that still leaves you with pretty much the same exact defensive game you've been playing for years. Once again, I think saying that Madden 15's changes somehow salve everything potentially wrong with playable defense is overstating things, but what the game does offer is a nice change of pace. First off, now players can swing the camera around while playing defense. That sounds like a small thing, but it's actually a big help when playing on the defensive line or as a linebacker. Before, I always felt the defensive players were getting obscured by the offensive line. This negates that issue, and in concert with a new defensive minigame--you can jump the snap by hitting a trigger button at the right moment--it goes a long way to helping you play more effectively. In addition to that trigger button, you will also see button icons pop up when your defender is engaged with a blocker, indicating whether you should be using finesse moves or power moves to get by them. If that makes things too easy for you, you can just shut those off entirely, but for my part, I found them to be a helpful instructional tool.

As good as all those changes are, they don't make playing defense a perfect experience. Playing in the secondary still often feels like a crapshoot, for instance. The reverse camera doesn't feel as effective when controlling a defensive back, and I still feel like I'm a liability any time I assume control of one. I did find myself pulling off a few more interceptions than I have in the past, but I can't attribute that to anything specific to this year's game. If anything, INTs are just as prevalent (or over-prevalent, depending on your opinion) as they've ever been. Hitting and tackling still has its issues as well. While I appreciate this year's control alterations--conservative and aggressive tackles have been assigned to separate buttons, and now you can square up defenders by holding down the LT/L2 button--tackles still result in a lot of strange, often awkward-looking hits. Some of this might just be leftover wonkiness from the implementation of the Infinity Engine, and it's not nearly as bad as it's been in the past. Remember a couple of years ago when players were literally tripping over each other at the end of practically every play? Yeah, it's not that bad. Still, it's odd to watch players' limbs bend and contort in inhuman ways any time they bump into one another. It's similarly disconcerting to watch players often go functionally limp when they collide, as if someone had just unplugged them from The Matrix.

That last point has more to do with graphics than gameplay, but those kinds of graphical issues stand out a good bit more now that the series has planted itself firmly on the new generation of consoles. Last year's game on Xbox One and PS4 was just a minor upgrade from the 360 and PS3 versions, but Madden NFL 15 advances the game's visual presentation significantly. Stadiums, crowds, and sidelines have never looked better, and the action on the field generally looks excellent. You may see some weirdness with marquee players and coaches not quite looking like their counterparts--which is to say nothing of the haunting looking representations of Jim Nantz and Phil Simms that pop up at the beginning of each game--but this year's player models are nonetheless a huge improvement. Of course, with that increased detail, issues like physics glitches and hiccups in tackling animations tend to stand out all the more.

The offensive side of the ball hasn't seen as much alteration, but there is at least one nice addition in the form of tempo changes. Essentially, you can now toggle between the normal pace of the game, a no-huddle offense, and a deliberately sluggish "chew clock" option. The no-huddle option brings your offense to the line super quickly, though obviously limits the number of plays you can call. Chewing the clock winds the play clock all the way down to ten seconds before you break the huddle, which greatly improves the pace of late game situations. It's a really minor thing and it doesn't change the offensive game in any truly significant way, but it's a nice touch that I'm frankly sort of baffled hadn't been included previously.

Another big change to this year's game is playcalling. In the past, suggested plays were limited to the old "Ask Madden" feature, which would spit up a few situationally correct plays, and way back when would also offer up a bit of John Madden-voiced coaching commentary (EA really needs to get him back in the recording booth some day). Madden NFL 15 expands on this considerably, offering up multiple suggestion options based on analytics. You'll still get a list of plays ideal for the game situation you're in, but they come with actual quantifiable data that helps explain why those plays make sense. And then there's a whole other category of plays built around suggestions from the community and how effective those plays have been in similar situations. It takes some getting used to, but I found it vastly preferable to any play-calling system this series has used in the past.

Of course, there are adjustments spread throughout the game's various modes and features, though most of these are minor in nature. Connected franchise still lets you create a player, coach or owner of your own design, and only two of those options are actually fun (sorry owner mode, you're still the worst). The big change to the mode this year is player confidence. At the top of each in-game week, you'll have the option to put your players through a series of pre-game exercises designed to boost a specific player, or an entire team's confidence. These are mostly non-playable exercises (though there are some in-game practice options available too), but there is a tangible benefit to doing them. Players with greater confidence tend to play above their stat ratings, while those lacking in confidence will more easily bottom out in arduous situations. This is essentially a play on the old hot/cold streak stuff from older games, but now you have a bit more control over it. This is nothing earth-shattering, but I think it's a nice way to handle the kinds of intangible swings inherent to professional football. I just wish it weren't the only big addition this year, because apart from some tweaks to the XP upgrading system for players (which finally make that feature feel useful), little else has changed for the better.

The same can be said for Ultimate Team, which has received a few tweaks in the name of making the mode more navigable, and not much else. It's still a mode I like a lot more in theory than in practice, as the progression of it still leans a little too heavily on inspiring the urge to pay for additional player card packs, versus just playing through the mode's offline and online challenges to earn coins. The skills challenge mode has been fleshed out with some additional trainers for specific game situations, and a surprisingly fun gauntlet mode that ramps up the ridiculousness of the regular training minigames. Online play hasn't seen any significant changes, though most of the games I played did seem a bit laggier/more stuttery than in last year's game. As always, your mileage may vary, but this was a bit more pronounced than what I've typically experienced in other EA Sports games.

All of the above changes go a long way to making this year's Madden feel the most consistently satisfying entry in the series in a good long while. While holdover issues like problematic offensive lines, sometimes clunky running mechanics, deeply confusing in-game menus, annoyingly repetitive (and periodically incorrect) commentary, and various glitches of both the minor and severe varieties are still present, I didn't find myself sighing with exasperation over them nearly as much. More often, I found myself too engaged with the act of playing video game football to care quite as much. Given that I generally like video game football quite a bit, it's sort of dispiriting to realize how long it's been since I've been able to do that. There are still a lot of things this series could stand to improve, but Madden NFL 15 represents an encouraging step forward for this series. A small step, to be sure, but still a positive one. 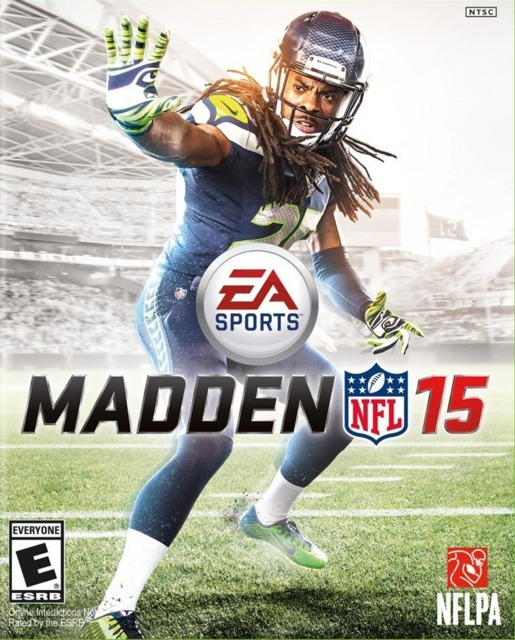