by Brad Shoemaker on August 23, 2010
Share:TwitterFacebookReddit

This decent tale of ascension through the mob ranks feels a little outdated as an actual video game.


I'm a sucker for a good mob story, but Mafia II's is merely decent. This mid-century tale of Sicilian immigrant turned low-level mob enforcer Vito Scaletta borrows so much from genre classics like The Godfather, Goodfellas, and The Sopranos that it's almost a surprise to see their respective filmmakers go uncredited at the end of the game. You end up with a lot of (maybe too many) recognizable elements and scenarios mashed together--dead bodies in trunks, mob bosses living in luxury behind bars, wiseguys turned Federal informants, traditionalist dons clinging to the old country fighting with American-bred bosses who are into dealing dope--that do fit together reasonably well and result in a few genuinely exciting moments toward the end. But you have to slog through just as many predictable turns, and a lot of uninspired game design--driving and shooting, then more driving and shooting, then still more driving--to get to them. Then, just when it seems like it's about to really get going, the game is over.

Cliched or not, the plot would be strong enough to support Mafia II if it were a better action game than it is. This is an open-world game that doesn't utilize or really even need its open world. The story progression is completely linear--there's only one plot-related mission available at any given time--and there are no side missions or activities to speak of, leaving the sprawling metropolis of Empire Bay to feel like so much finely crafted window dressing. There's some simple pleasure in hopping in a classic car and tooling around the beautifully rendered period trappings of the city, but at a certain point, you realize you're spending the majority of your time in the game merely ferrying yourself and some number of cohorts to or from your next mission objective, and this isn't an especially lengthy game to begin with.

Mafia II doesn't really take into account the eight years of progress in open-world game design since the first Mafia came out. Not only is there a conspicuous lack of significant activities to keep you busy between missions, most of the missions themselves merely revolve around functional third-person shooting that's really nothing you haven't seen before. At least there are some impressive surroundings in which to do all that shooting, like a lavishly decorated Chinese restaurant, a planetarium, and lots of the decrepit industrial parks and seedy-looking back rooms where mobsters seem to love doing business. To be fair, there are two sorts of collectibles scattered around the game world (one of which notoriously features several dozen Playboy centerfolds) that don't really add much to the experience of playing the game.

In general, it's stop, pop, rinse and repeat from one mission to the next, and other than the occasional fistfight or car chase (there's that reliance on driving again), it's hard to play more than a handful of the story's 15 chapters without feeling like you've done all this before. Like the storyline, the missions have a couple of standout moments--an explosive assassination attempt atop the city's tallest, snazziest hotel comes to mind--but there aren't enough of them to keep the action moving consistently through the game. It's worth noting that the shooting is more precise (and the frame rate much smoother) on the PC, the platform the original Mafia originated on. That's probably the best platform to play the game on, despite the presence of some thin, action-oriented free DLC on the PS3.

Sandbox games used to be largely about making your own fun by taking advantage of a broad set of free-form gameplay tools, but I think Mafia II exemplifies a paradox that's been emerging as these games have evolved, as they've further humanized their protagonists, and rendered their urban environments in more and more lifelike detail. You just can't play this kind of game that carelessly anymore if you care about the underlying narrative. A guy like Vito Scaletta is no longer just a faceless cipher you use to run around wantonly wreaking havoc and killing innocent people. You see him serving in World War II, breaking bread with his meek little Sicilian mamma, looking out for his sister when the loan sharks come calling. The game does a decent job of making him feel like a real person, albeit one leading a morally questionable lifestyle. But either way, he's no fool.

It comes down to a question of how much larger-than-life absurdity you can accept in a story-driven game. Even the most hardened criminal doesn't run around spraying bullets in broad daylight, and given how intently Mafia II focuses on putting you in the role of a single character rising through the ranks in a believable depiction of mob life, it breaks the story's plausibility when you run amok the way you gleefully did in Grand Theft Auto III. Admittedly, it's entirely a matter of personal preference and play style, but I felt boxed in by the relatively realistic nature of the story. That feeling, combined with the lack of explicitly designed side missions and activities, left me to simply play through the story missions in a straight line over a dozen or so hours, watch the ending, and turn the game off.

Despite the dated game design, I couldn't help getting sort of attached to some of Mafia II's more colorful characters, or maybe it's more accurate that I at least developed some interest in finding out their ultimate fates. There's an endless parade of Italian gangsters here, so it's to the credit of the writing and voiceover that it's easy to keep them all straight, figure out who's working for whom, and get a general sense of Empire Bay's larger criminal underworld. There's a lot of entertaining, colorful (mostly blue) dialogue that at least enlivens your incessant driving from place to place, and spices up most of the cutscenes, even if that cutscene is basically the only thing you get to see or do when you arrive at your destination.

Playing Mafia II gives you the feeling that the developers put more emphasis on telling a great mob story than designing a great video game, but had to split their attention too much to effectively do either one. That story would have probably been better served if the game had shed its superfluous open-world trappings and focused on quicker pacing and greater diversity in the mission design. There are a lot of great mob stories out there already, and this one needed more focus to stand out next to all the memorable tales that came before.
Brad Shoemaker on Google+
Load Comments 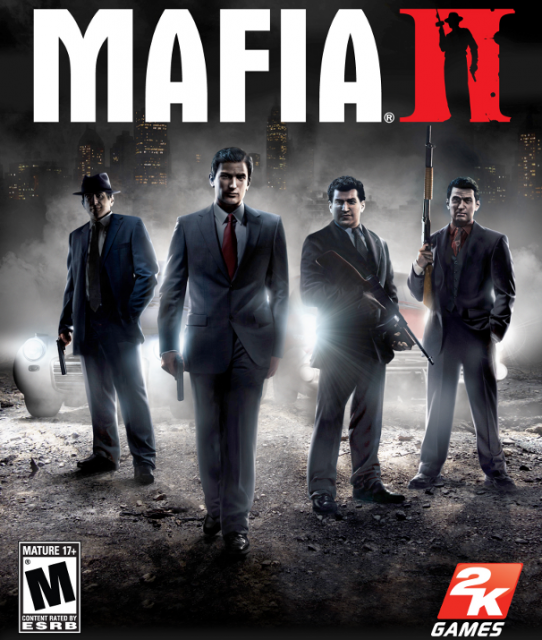