AlphaDream hits the mark again in terms of combat and dialogue, even if some new additions fall flat.

Across the dozens of Mario games released over the last few decades, no series has given us as much of a glimpse into the weird workings of the Mushroom Kingdom as the Mario & Luigi RPGs. For over ten years, these games have injected personality and humor into characters that, while iconic, were previously little more than yelping, go-karting avatars. Five games into the series, Mario & Luigi: Paper Jam invites the star of the Paper Mario series along for the adventure. While the game contains some frustrations that are unique to this entry, its engaging battles and entertaining dialogue ensure that it lives up to its pedigree.

Naturally, the chaotic setup of Paper Jam comes as a direct result of Luigi being an idiot. After he screws up an attempt to fix a hole in Peach’s castle, he accidentally knocks a storybook off of a shelf. It happens to be the book that contains the entire Paper Mario universe, so the “real world” Mushroom Kingdom is suddenly inhabited by scores of paper goombas, koopa troopas, and Paper Mario himself. Bowser meets Paper Bowser, and their first idea as a duo (after some bickering) involves their knee-jerk instinct to capture both versions of Princess Peach.

Paper Jam sets up this story and gets you on your way in a far speedier fashion than previous games in the series. Dream Team (the most recent release prior to Paper Jam) was especially guilty of forcing players through laborious tutorials without any option for veterans of the series to bypass them. Based on new options this time around, it seems that Nintendo has learned from the past in a variety of ways. Every time that the playable trio (Mario, Luigi, and Paper Mario) learns a new attack, Starlow says little more than “Hey, go into the Battle Guide if you want to practice how to do this thing.” You can then practice the sometimes-involved attacks at your leisure with no consequences, or you can test them out in the field and hope to get it right the first time. Either way, you’ll never be forced to sit through a lengthy tutorial sequence upon earning a new attack.

Other systems make Paper Jam feel speedier than its predecessors, as well. During almost any kind of cutscene or dialogue sequence, you can hold the R button to speed up whatever is happening onscreen. Save blocks are no longer present, as you can save anytime you’re not currently in a battle (Dream Team allowed you to save anywhere, but still retained the save block system). Assist mode can be turned on and off with one button during fights, which indicates which Mario brother an enemy is targeting. If you really want to make the game easier on yourself, you can turn on an easy mode that makes your attacks more damaging, your opponent’s weaker, and gives you more time to execute timing-specific attacks. Paper Jam also doesn’t wear out its welcome, as it can be completed in under 30 hours. I love these games, but Dream Team didn’t do nearly enough to justify its 40- to 50-hour playtime.

If all of these options to make the game easier aren’t enough for you, you’re free to break a good amount of the game entirely if you’re willing to invest in some amiibo backup. Any amiibo that’s based on one of the core Mario characters (Mario, Luigi, Yoshi, Peach, Toad, and Bowser), can be tapped to the bottom screen once to activate a variety of bonus cards. Some of these bonuses are minor (guarantee a critical hit, raise defense temporarily, etc.), while others can change the dynamics of an encounter or eliminate the challenge entirely. Early in the game, I had five different amiibo characters that could deal between 48 and 60 damage to every single enemy in every single fight. These actions don’t cost an actual turn, so most of my battles could be bypassed immediately by pressing amiibos to the bottom screen and watching the attack animations until all of the enemies were dead. The amount of damage my amiibos could deal in the final hours of the game became less significant as enemy HP limits grew higher, but they can still make a major impact if you decide to use them.

Despite the involvement of Paper Mario and the rest of the Paper Mushroom Kingdom, this is very much a Mario & Luigi game. Its sense of humor and battle system fit right in with the lineage of AlphaDream’s other Mario RPGs, but the addition of Paper Mario comes with plenty of entertaining gags and gameplay quirks. In the overworld, Paper Mario can squeeze into small cracks, fold into a paper airplane to cross gaps, or roll into a tube and stretch himself out to grab items. During battles, he has a wide variety of attacks that he can perform in tandem with the “3D” brothers, such as folding himself into a boomerang that they can throw at enemies. His entire health system is unique, as well, allowing him to create numerous copies of himself that can add jumps or hammer strikes to his standard attacks.

The Mario & Luigi series has always featured engaging battles, and Paper Jam’s combat is my favorite yet. Having three characters to monitor and attack with hits a sweet spot between the sparseness of two characters and the overwhelming feeling from the four protagonists of Partners in Time. Considering that this is the fifth game in the series, I was glad to see that AlphaDream still has a ton of interesting and fun attacks up their sleeves.

Recent games in the series have each featured a gimmick of sorts. Bowser’s Inside Story featured a playable Bowser and giant boss battles that required you to turn the DS sideways. Dream Team had you fighting within Luigi’s dreams on the top screen while manipulating the (sleeping) real deal on the bottom. The quality of those sequences varied, but I felt they both had more to offer than the gimmick battles of Paper Jam. Eschewing the standard turn-based 2D style of the rest of the game, the new papercraft battles put you in control of giant, 3D versions of a variety of Mario characters. Taking out your papercraft rivals in these battles involves timing your own dash and jump attacks while avoiding their projectiles and minions. Controlling these papercraft characters doesn’t feel great, and I felt like I was fighting with the perspective and controls more than I was with my actual enemies.

Making these sections more of a chore are the sequences that come before them. In order to build your papercraft goliaths, you need to deliver a set number of Paper Toads to Toadette. These non-optional sequences are plentiful, and I rarely enjoyed any of them. Rather, I grew increasingly frustrated at the repeated hide-and-seek and stealth minigames that involved wrangling these Toads. These activities would have been totally excusable (perhaps even welcome) if they were relegated to being a side activity that rewarded you with extra XP or gear. As a requirement for beating the game, they become one of the lowest points of Paper Jam.

Papercraft battles and toad collection busywork turned me off of some sections of Paper Jam, but I really enjoyed the majority of the game. It's disappointing that these new additions fall a bit flat, but you'll spend maybe four of your 30 hours with this game engaging with them. After the slow trek through Dream Team, the speedier nature of this game makes it a significant step up. Its dialogue is as hilarious as the series has ever been, even if I was hoping for some more amusing enemy banter (you won’t find anything as memorable as Fawful or the Inside Story version of Bowser here). Most importantly, everyone in the entire Mushroom Kingdom is still inexplicably mean as hell to Luigi. Paper Jam isn’t without some missteps, but the combat is better than ever and the game as a whole hits the charming and humorous beats that it has in the past. 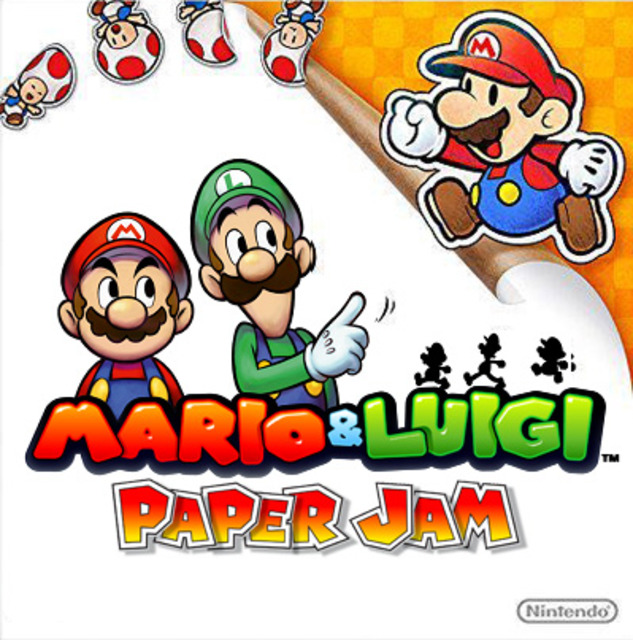