by Ryan Davis on May 7, 2008
Share:TwitterFacebookReddit

During my time with Mario Kart Wii, the theory was proposed to me that Nintendo has ceased trying to evolve its franchises, opting instead to simply remake their trademark games for each new generation of players, and I think the Mario Kart franchise serves as a powerful Exhibit A for this argument. In my experience, if people have a favorite Mario Kart game, it's usually the first one they played. Mario Kart Wii is by no means bad, but it seems built for first-timers, and those looking to recapture what it felt like to be a first-timer. It delivers just about everything you expect from a Mario Kart game, both good and bad, making for an experience that can be fun, but never surprising.
So expect to see your usual roster of Mushroom Kingdom denizens power-sliding their way around serpentine courses peppered with jumps, boost pads, and crazy obstacles. There have been some modifications and some additions to the stock Mario Kart experience, but these are minor refinements, not evolutionary jumps. There's a whole host of different control schemes, including a motion-control option that makes use of the little plastic steering wheel shell that comes packed-in with the game. I could see the Wii wheel being fun if I had never actually driven a car, but the novelty doesn't make up for the lack of precision for me. I personally found that a GameCube controller or a remote-and-nunchuk combo produced the best results, and if I didn't have an irrational distaste for the Classic Controller, that'd probably work pretty well, too.
In addition to the different character weight classes, there are now a number of different karts and motorbikes to choose from, each with a unique handling profile that can have a very dramatic effect on how the game handles. If you run a couple grand prix races in a kart, then switch over to a bike, expect to bring up the rear for a couple races. Both bikes and karts can perform stunts in mid-air, resulting in a little shot of boost when you hit the ground. Bikes are essentially two-wheeled karts, though when you're on a bike you can pop a wheelie for extra speed on a straightaway, and bikes don't get the second level of yellow sparks that karts can get by holding an extra-long power-slide. Despite all these variables, the basic Mario Kart rule of “Always Be Drifting, Except When You Shouldn't” still applies across the board.
The structure of the game is predictably familiar. Single-player revolves around grand prix races that come in 50cc, 100cc, and 150cc varieties, though you can also run time trials, create custom races, or partake in the consistently tedious battle mode. I found the grand prix stuff fun, right up until I got to the 150cc level, at which point my Mario Kart skills buckled under the crushing force of random chance. With inherently solid controls, Mario Kart Wii, and by extension, every other Mario Kart game, could be an accessible, skill-based racing game, if it weren't for all those goddamn power-ups, and the game's serial habit of giving the most potent power-ups to last-place players. What's the fun in skillfully outmaneuvering 11 opponents for three laps only to wind up in 12th following a barrage of blue shells, POW blocks, and thunderheads in the final stretch? It's always been frustrating, and it remains frustrating.
The multiplayer options are bolstered by the inclusion of online play, which kind of alleviates the sad fate of playing Mario Kart all by yourself, albeit in the silent, heavily insulated world of the Nintendo Wi-Fi Connection, where it's difficult to play with friends and strangers at the same time. Maybe I'm just jaded, but it's 2008 y'all, the simple inclusion of online play is no longer enough to set my world on fire. I'm also a little bothered by the track selection in Mario Kart Wii. There are 32 different tracks here, a full half of which are straight-up remakes of tracks from past Mario Kart games. To be fair, a number of the new tracks are fun and inventive, and I understand why some people would be excited about the inclusion of so many tracks from past Mario Kart games, but for me it just reinforced the feeling that, yup, I've totally already played this game before.
Mario Kart Wii is a good game stunted by its audience's apparently insatiable appetite for the exact same thing, over and over again. The addition of online play and motion controls are good, but they're also the most predictable choices possible. Personally, I'm completely tired of getting exactly what I expect.
Load Comments 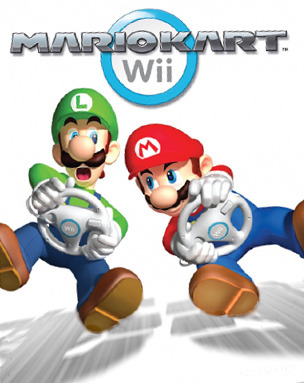