by Brad Shoemaker on September 1, 2011
Share:TwitterFacebookReddit

Let's get the self-evident part out of the way: If you're not interested in playing the original three 2D Mortal Kombat games in (more or less) their original forms, you have no business with Mortal Kombat Arcade Kollection. You may move along.

Now the part that isn't obvious. Even if you are such a person, you'd better have other like-minded individuals around you who want to play against you, in person, on the same console. That's the one way this compilation delivers. Arcade Kollection could have served as a great museum display for three of the most memorable fighting games of the '90s, but there are too few bonus features and too many things wrong with this package to make it recommendable to anyone but the most diehard MK fan.

Mortal Kombat, Mortal Kombat II, and Ultimate Mortal Kombat 3 are all here in a no-frills format. In terms of the emulation, the graphics look fine, with a few basic visual filters available to soften the jagged, low-res look that comes along with games this old. All three games generally play like they're supposed to as well, though there's an annoying issue where you lose control of your character for a second when you unpause during a match. Also, I can't in any way recommend you play this game with the old Xbox 360 D-pad. On a Dual Shock 3 or the new 360 controller with the twisting D-pad, the gameplay is fine, though a stick is naturally your best option. It's nice that the game's controls map directly to that special-edition joystick that shipped with the new Mortal Kombat earlier this year.

Since the games look just like you remember them, it's a bit odd the audio in this package doesn't sound the same way. There are numerous cases of certain sound effects canceling out other ones, and a few samples here and there sound like they play back at a noticeably higher fidelity than others. A few sounds, like the clapping from the first game, sound completely different than I remember, almost as if new versions have been added in. The music in Goro's Lair consistently cut out for me every time I played that stage. Once, a splattering sound continued to loop after I had finished a match and even followed me all the way back to the main menu, forcing me to quit out. The list goes on.

Absolutely the most disappointing thing about Kollection, though, is the online play, which is painfully laggy at best, and unplayable at worst. All three of the games feel like they're playing in slow motion when you're fighting someone online, and across the numerous matches I played on both 360 and PS3, not one came even close to replicating the feel of playing locally. Making online fighting games feel right is clearly a major challenge, since almost nobody pulls it off, but solid online play is practically the only reason you'd come to this package. Without that, and lacking anyone to fighting against locally, you're stuck playing against the games' hilariously awful AI characters. If that's your situation, you might as well not play at all. Adding insult to injury, the most valuable achievements and trophies here require you to finish the arcade modes of all three games, but at least on the Xbox, those achievements are currently glitchy and aren't guaranteed to actually pop up when you beat any of the games. That's just inexcusable.

The first Mortal Kombat--with its relatively limited, clunky fighting mechanics--exists mostly as a historical curiosity, but the two sequels are just as fast-paced and fun now as they were back in the day, so in the barest sense, it's nice that this collection gives you a chance to play them all in one place. But that's barely all it does. I love Mortal Kombat as much as anyone, and Mortal Kombat II in particular inspired a fervor in my adolescent self that few games have matched before or since. But given how loveably other classic arcade fighters have been treated recently, the problems and omissions make Arcade Kollection nothing but depressing. These games deserve better. 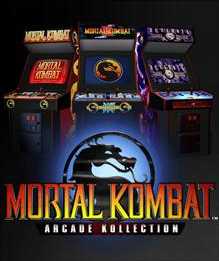