by Alex Navarro on May 24, 2011
Share:TwitterFacebookReddit

Like an extreme sports video directed by Roland Emmerich, MotorStorm: Apocalypse is simultaneously at its best and worst when it ramps up its particular brand of delirious carnage.

MotorStorm: Apocalypse is, on several levels, a game about making the best of misfortune. In this apocalyptic world, massive earthquakes devastate the planet, laying waste to urban landscapes. Rather than run around screaming about it, people of this terrible future take the tack of, "When life gives you lemons, build a deadly race track out of lemons," and turn all this destruction into an opportunity for some remarkably dangerous auto racing. Even outside the game itself, Sony was forced to deal with misfortune outside of its immediate control, with both its release hype being hampered by the horrific earthquakes in Japan, and the costly PSN outage that robbed players of the game's best feature--its online multiplayer--for weeks following release. Yet, for all these misfortunes, both purposeful and not, only one really matters, and it's the one that MotorStorm: Apocalypse ultimately can't quite overcome: it is a driving game in which driving often isn't all that fun.

It's not because of the admittedly divisive driving-style this series has always employed, mind you. You're either bought in on MotorStorm's central conceit--multiple vehicle classes, from motorcycles to semis, all racing on the same track--or you aren't. Nor is it strictly a matter of the series' sometimes sluggish, often floaty-feeling physics. While those looking for an upgraded feel to the game's driving style will be disappointed--it seriously feels a lot like the first MotorStorm game across the board--those floaty mechanics aren't always to the game's detriment.

What is to the game's detriment is, sadly, also the game's most compelling feature. Namely, that of the wanton obliteration that covers every inch of the game's tracks. First, the good: this stuff looks incredible. When you're racing on a track in the game's fictional city (which is more than loosely-based on San Francisco), everything is in an ever-morphing state of disrepair. Earthquakes have already completely ravaged the city, leaving highways, buildings, and miscellaneous debris scattered every which way.

It's impressive destruction made even more so by the real-time nature of it. As you drive through courses, more tremors will often strike, leading to new deformation of the environment and adjusted paths and jumps for you to take. Sometimes you'll even find yourself dodging (or ramming) random survivors with firearms and rocket launchers, who clearly have taken none too kind to a bunch of no-goodniks rampaging through their obliterated burg. The game's visuals are top-flight, creating impressive amounts of debris and chaos around you at all times. It's exactly as insane-looking as a game like this should be.

So, why isn't it more fun? For the same reason it looks so great, Apocalypse is frequently a frustrating mess. The on-screen chaos is, at times, indecipherable. Is that piece of freeway that's jutted outward part of the track? Or an untraversable obstacle? Whoops, before I could figure it out, I exploded. Any number of variations on that theme rear their head throughout the game's various tracks. There are jumps that aren't quite jumps; derelict cars that look like other racers, but aren't; showers of sparks and fire and whatever else that morph into an aesthetically pleasing, if borderline dysfunctional track environment.

Fun fact: crashing over and over again isn't that much fun, unless you're Burnout, where that's the point. It's not the point here. Success or failure hangs on the thin string of your personal reaction time, in which case, the game's sometimes sludgy controls can actually be a detriment on occasion. If you're the controller-destroying type, somewhere around your umpteenth surprise explosion, you may find yourself attempting to recall some images of a calm blue ocean to avoid another expensive, rage-induced tantrum. Perhaps you can use the game's exceedingly lengthy between-track load times to rub your temples and do a little deep breathing.

It's a shame, because once you break past that wall of irritating, accidental death--which you'll likely do by just memorizing all the courses and their destruction patterns, since they don't change from race-to-race--there is certainly some fun to be had here in a multiplayer environment. Going online and playing against up to 15 other racers can be a blast under optimal circumstances, especially if you get into playing around with the unlockable perks--which aid elements like your boost ability, traction, and reset times--and the online betting system, where you can choose an online rival and make special effort to beat them for fun and profit. Online races are certainly competitive, but they also just happen to be kind of a crapshoot unless you've memorized all the courses.

I haven't mentioned the game's single-player element, because honestly, I'm trying to forget it. The game's "story" mode is an atrocious, dim-witted, utterly unpleasant experience from top-to-bottom. It tries to give copious amounts of context where none is really needed. Do we care about the personalities behind this absurd racing league? I'm guessing not. And yet the mode is replete with talky cutscenes filled with miserably animated "comic-book" art that looks roughly equivalent to Rob Liefeld attempting to draw a Mountain Dew commercial. Every scene draws so heavily from that weird place of hyper-cheesy "extremeness" that so permeated sports culture of the early 2000s that it feels like the game should have just been introduced by a shot of Jonny Moseley positing the question, "What if it earthquaked in San Francisco?" followed by a record scratch, the opening refrain of a Zebrahead song, and a shot of two girls in bikinis eating apocalypse-flavored Doritos.

Were it limited to a single, crappy storyline, maybe it wouldn't be so bad. But the story mode forces you to trudge through three different stories featuring three increasingly insufferable assholes. Difficulty increases as well, which doubles the drain on your patience as you attempt to slog through this ill-conceived endeavor. On the plus side, the cutscenes are skippable. Again, the load times are not.

When the elements align and the clouds of frustration break, MotorStorm: Apocalypse is kind of awesome. In the right situation, blasting through the cluttered remains of a major city in a souped-up ATV or comically-huge monster truck is nothing short of sublime. But those moments are fleeting, and eventually, you'll find yourself snapped back into Apocalypse's tragic reality of calamitously awkward racing that's too often hamstrung by its own grand ambitions of scope and destruction. It's a cleverly ruinous game frequently ruined by its own cleverness. 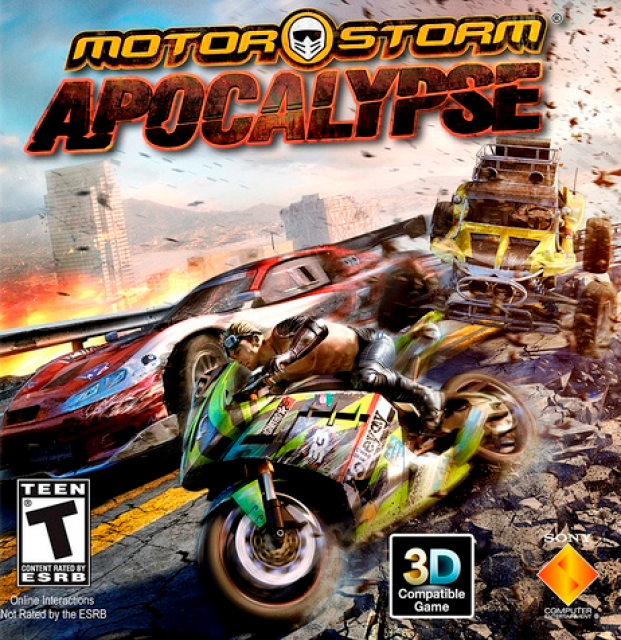