by Brad Shoemaker on November 18, 2012
Share:TwitterFacebookReddit

New Super Mario Bros. U is the fourth platformer to come along since Nintendo brought back the original 2D style of Mario action a few years ago on the DS, and as such, it isn't all that "new" anymore. But it fits nicely in the role of a sturdy, well-made Mario nostalgia piece to go along with your freshly purchased launch Wii U. There are some inventive new touches scattered here and there in some of the game's individual levels, and the whole package serves as a wonderfully promising early example of what Nintendo's artists will be able to do with high-definition graphics at their disposal. At the same time, the game sticks a little too closely to the precise formula employed by its three predecessors, which makes it a shame Nintendo didn't see fit to get a little more creative here.

To put it bluntly, your interest in NSMBU will hinge on how much of the previous three games you played, and how recently you played them. There are eight worlds here, among them a green world, an ocean world, an ice world, and a desert world (and yes, the desert world is the second one). Every level has three star coins to find if you want more to do than simply run to the right till you jump onto the flag pole. There are koopa kids zooming around in airships, but I'll leave it to you to guess how many times you have to jump on their heads to beat them. The same weird save-game quirks are still in here that keep you from making a hard save until you beat a boss. If you've played any of the other New Super Mario games (or heck, any 2D Mario ever, really), you'll be intimately familiar with the basics of this game before you even dig into it.

That's not to say there's nothing new about NSMBU. The most immediate addition is the flying squirrel suit that you encounter in the very first level, which lets you glide slowly after a jump, get a single altitude boost while in midair by doing your spin move, and cling to walls for a few seconds (though I found myself inadvertently sticking to walls at times I didn't want to as often as times I did). There's been an obvious effort to spruce up the overworld map, which now contains a bunch of timing-based elements like miniature enemies that cross your path and, if you run into them, spawn short little action levels in between the preset stages. That kind of stuff does change up the flow a bit, as do a handful of new enemy types. And it's awfully nice to ride around on Yoshi again, even if he only pops up in a surprisingly small handful of places. But the ins and outs of the individual levels don't play around with the conventions of 2D Mario action nearly as much as I would have liked, and while a few levels do get a little creative with elements like light and darkness, you won't find anywhere near the level of invention that you saw in the best recent Mario games, like Galaxy and 3D Land.

Aside from playing it too safe, Nintendo's gravest miscalculation with this game is releasing it a mere three months after New Super Mario Bros. 2 on the 3DS. That will only matter if you're the sort of person who keeps up with all of Nintendo's first-party games when they're new, but if you are that sort of person (as I am), NSMBU is just going to feel like too much, too soon. Of course, if it's been years since you played one of these games, this one will feel a lot more invigorating, and hell, if you've never played a New Super Mario game before, U is practically a must-have. But coming almost directly off of the 3DS game, you can't help feeling like Nintendo is pouring the dancing turtles and wah-wahs on a little thick right now. It doesn't help that specific musical cues and voice samples like "It's Mario time!" are lifted straight out of that last portable game.

Like the Wii game, NSMBU turns into a very different experience when you add more players into the mix. But that experience is exactly the same sort of barely-controlled four-player chaos as you saw in the Wii game: fun in short bursts if you have company over, but don't expect to make any serious progress or grab every single item. The addition of an assistive fifth player on the gamepad who can draw in makeshift platforms for the four characters onscreen is a nice twist. But it's absolutely ludicrous that you can't use the gamepad to control Mario in a multiplayer game, where only players with Wii remotes can play as actual characters. That, and the fact you can't play the game at all with the new Nintendo-made Pro controller, are just inexcusable. Overall, the multiplayer mode can get a little too manic for my tastes, so luckily the handful of peripheral modes in here will do a better job of testing your Mario mettle without some jerk jumping on your head every five seconds. There's a neat, diverse set of challenges that want you to do specific things like dodge fireballs for as long as you can, or glide with the flying squirrel suit across an entire level without touching the ground. And the boost rush mode gets pretty silly, since it scrolls the level faster the more coins you pick up. But since you'll notice levels from the main game popping up in here pretty quickly, the side challenges feel more like a novelty than something to spend serious time on.

One thing New Super Mario Bros. U does so very right is its graphics, at least from the standpoint of technical execution. The game's visual presentation is a master class of polished, shiny perfection, looking about as good in high definition as you would expect a Nintendo game to look. Though, aside from a dramatically increased pixel count, the aesthetics of this 2D Mario game are barely distinguishable from those of the other 2D Mario games of the last few years, and while I can appreciate a simple increase in fidelity applied to the sort of work that's already been established, I really wish the Wii U's hardware had been harnessed to send Mario through some worlds we really haven't seen before. Why does every game need a desert world and an ice world? There's a single standout instance in this game that basically amounts to Van Gogh's Starry Night rendered in the form of a Mario level, but beyond that, it's all too familiar. Why?

It's worth noting that buying NSMBU will currently also net you a pretty darn good handheld game, since you get the exact same thing on the gamepad's controller screen that you see on your TV (aside from a slight but noticeable decrease in resolution). I suspect that novelty will wear off as the Wii U becomes commonplace and more games offer the ability to simply turn off your TV and go lie in your bed while continuing your game. But for now, the seamlessness with which you can transition between big and small screens, without fiddling with syncing another device or downloading some companion app or whatever--just hit pause and go in the other room and you're done--is still mighty impressive.

Everything about New Super Mario Bros. U is pretty exciting, except the game itself. Is it possible that this is the best game in the "New" series to date--not to mention one of the best exclusive Wii U games on the market, by default--and at the same time kind of flatly uninteresting? Apparently so. The game is perfectly well made for what it is, and I had plenty of fun playing it in short bursts here and there, but at this point the series' by-the-numbers design philosophy is starting to lend the name "New Super Mario Bros." a degree of unintentional irony. 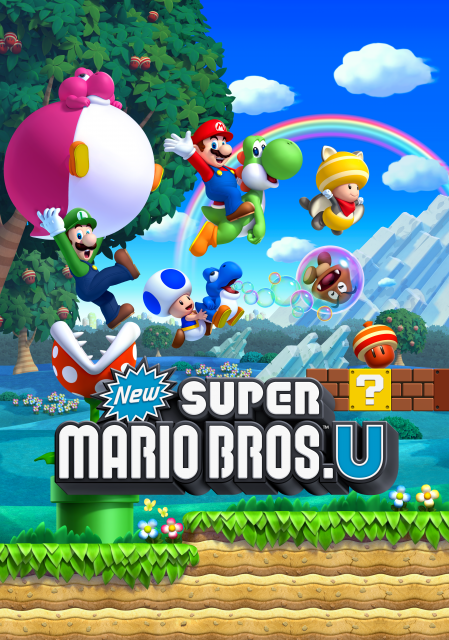