by Jeff Gerstmann on November 15, 2009
Share:TwitterFacebookReddit

While technically accurate, the "New" in New Super Mario Bros. Wii is surrounded by all of the classic 2D platforming mechanics from Mario's past, making it more of a nostalgic product than something truly new. Not that there's anything wrong with that.


New Super Mario Bros. Wii is kind of a goofy title, but it tells you just about everything you need to know about Nintendo's latest release. It's new. It's got those Super Mario Bros. guys in it. And it's for the Wii. The nostalgist in me wants to stop right there and say "That's all you need to know, get to a store!" But that'd be pretty irresponsible. You should probably know for sure that this Wii sequel to the DS release of New Super Mario Bros. updates the classic side-scrolling formula in most of the same ways that the DS game did back in 2006. You'll be expected to collect big coins and find the occasional secret exit when you're attempting to play seriously. But there's also an outrageously chaotic multiplayer mode that feels like an entirely different game.

The story and setting for New Super Mario Bros. Wii feels very rooted in the Super Mario Bros. 3 style of airships, world maps, suits, and the Koopa kids, who serve as both mid-bosses and bosses for each of the game's eight main worlds and impede your progress as you attempt to save Princess Peach yet again. But this isn't a remake of SMB3. You'll see some Super Mario World-era stuff sprinkled in there, and Mario's abilities include the butt stomp, triple jump, wall jump, and spin attack. So there's more to it than just running, jumping, and throwing the occasional fireball, and most of the variety comes from the game's power-ups. Most of them are pretty standard for the series, including the fire flower and the mini-mushroom, which makes you small. The more interesting additions are things like the propeller suit, which gives you a burst of flight when you shake the Remote, the ice flower, which shoots ice balls that freeze enemies, and the penguin suit, which lets you walk normally on ice, lets you slide on your stomach for long distances, and also lets you shoot the same ice balls that the ice flower offers.

As you make your way from one end of this adventure to the other, you'll pass through the standard array of themed levels. Yes, you read that right, New Super Mario Bros. Wii has an ice world and a fire world, a combination so potent that I almost feel like an idiot for even writing about it. Seriously, I might as well just write "This game has coins in it and when you collect 100 of them, you're awarded with an extra life, which the game calls a 1UP." My point is that if you've been playing games for awhile, you already know most of what to expect from New Super Mario Bros. Wii. It doesn't rock the boat too much.

Unsurprisingly, that's also one of the game's best qualities. With this product, Nintendo is simply reselling your childhood to you in a way that's playable on its latest hardware. Or, if you're still a child, it's doing the Disney thing by repacking its history in ways that are still palatable. By modernizing some bits around the edges, this doesn't feel like some kind of cheap rehash or shameless cash-in. By giving you more control over the characters via the additional jumping moves and power-ups like the ice flower, which lets you freeze enemies into blocks of ice that you can then stand on, the game provides a path for players who want to play with reckless abandon, holding down the run button at all times and just doing everything they can to stay alive during a mad break for the finish line. Playing this way is fairly doable if you've grown up alongside the series and still have most of your platforming wits about you, mostly because the game isn't terribly difficult and rarely asks you to do anything out-of-the-ordinary unless you're hellbent on finding every secret exit and collecting every last star coin, which opens up bonus levels at the end of the game. I also found it to be a lot more fun to play a little recklessly, and the way the game constantly throws extra lives at you means that you'll have plenty of backup if a section gets rough.

For players who don't want the added intensity, taking it slower is a viable, and significantly easier option. Patient players probably won't die very often. If you're an absolute beginner and manage to die eight times on the same level, the game will offer to show you a route through the level. You can interrupt the playback of this "super guide" at any point and take control yourself, or you can just let it play through the entire level. This will let you skip levels, but you won't get any star coins if you don't do it yourself. But it's hard to imagine any but the most novice of players needing to heavily rely on this option, given the game's relative ease. It's certainly not as hard as Super Mario World or Super Mario Bros. 3, if you're looking for some point of comparison.

You can also play through the levels with up to three other players, who take on the role of Luigi and two Toads. Though the levels and the end goal remain the same, playing with other people turns New Super Mario Bros. Wii into an entirely different game. Players can't pass through one-another, and you can pick up and toss other players, too. Combined with a bunch of tight platforms and a level or two that kills players if they get scrolled off of the screen, this all becomes complete and total chaos with players bumping each other into open holes by mistake or, if your friends are particularly vicious, tossing each other into those same holes on purpose. Carefully collecting coins and working your way through the worlds goes right out the window and you're basically forced to hold on and enjoy the ride as you bop and bump each other through the levels.

That said, there are ways to actually cooperate, such as forming human towers and jumping off of each other to get the top player up to some high, normally unreachable area. But coordinating that stuff takes more patience than I've got. Perhaps it depends on who you're playing with. Either way, it makes a strong case for offline multiplayer, as the only thing that would make all of this more difficult would be if the other three players were on the other side of a voice chat instead of right there alongside you, occasionally coordinating a strategy or two. The game really comes alive when you're playing in a group, but it's so crazy that if you're trying to play seriously, it'll just be frustrating. Also, the game pauses for a split-second whenever anyone grabs a power-up or dies. If you're mid-jump or just really focusing on what you're doing while another player is off dying or getting mushrooms, the pause is really disorienting. But if you're just looking to screw around and have a good time, you'll have some fun with the multiplayer modes.

Visually, New Super Mario Bros. Wii looks fine, but not everything stands up to close inspection. The polygonal player models look a little funky at times, especially if you're playing at 480i. It probably depends on what sort of TV you're using, but it didn't always look technically proficient on larger screens. That said, the artistic direction offers the high-color worlds of wonder that you've come to expect from a Mario game. As long as you aren't getting up close and personal with the on-screen action, it looks just fine. The game's soundtrack is peppered with yet another batch of remixes of songs from throughout the Mario canon.

New Super Mario Bros. Wii doesn't make dramatic changes to the "New" game that was released on the DS, but by offering more substantial multiplayer and a set of new levels to conquer, it stands out as one of the Wii's best. New Super Mario Bros. Wii is a great throwback that'll probably suck you in for a couple of days all by yourself, and for a bit longer if you've got friends that you want to toss into a bottomless pit.
Jeff Gerstmann on Google+
Load Comments 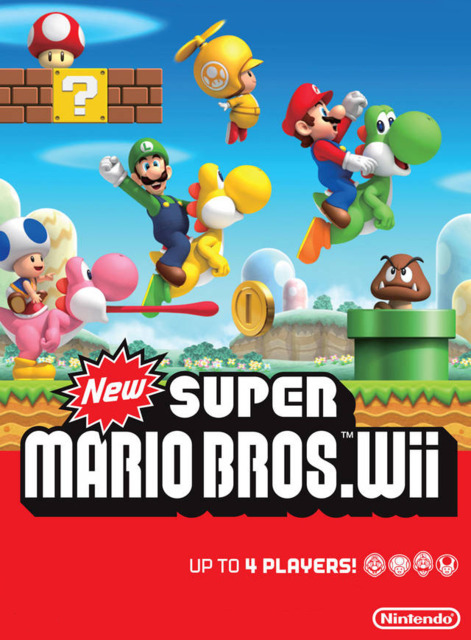