Oh, like you've never lost control of your limbs and thrown an axe at a child. Cut Octodad some slack.

by Alex Navarro on January 30, 2014
Share:TwitterFacebookReddit

Octodad: Dadliest Catch has one of the great comic premises ever attempted in video games. In it, you are Octodad, an octopus masquerading as the patriarch of a nuclear human family. Despite very obviously being an octopus, nobody--save but for an enraged, indeterminately foreign-sounding chef--has a clue about this, allowing Octodad to go about his daily life. Which is no small challenge given that his limbs flail and crash into just about everything as he tries to make his squishy body into something resembling a human form.

Of course, this premise was initially established in 2010's Octodad, a student-developed IGF entry which is still available free of cost on the Octodad website. However, while that game was more like an elongated cartoon sketch, Dadliest Catch fleshes out the betentacled hero's back story while adding several more ridiculous situations and objectives for the player to engage in. For much of Dadliest Catch's playtime, everything works in a kind of chaotic harmony, creating comedy out of every day situations that are, unsurprisingly, ludicrously challenging for a cephalopod in a suit. Unfortunately, the game doesn't quite stick the landing, as its last act gets bogged down by irritating objectives while trying to wrap up the character's arc a bit too hastily.

But before you get there, there's a lot of goofy fun to be had with Dadliest Catch's early goings. The game opens with Octodad frantically trying to prepare for his wedding. This opening level perfectly establishes the basics of everything that comes afterward. You quickly learn Octodad's limb control system, which requires you to independently control his legs and his right arm through careful control stick/mouse movements. You'll be tasked with simple goals like picking up objects, opening doors, putting on clothes, and the like. Thrashing around too much or destroying too much scenery will cause humans to become suspicious of you--nevermind that your head is yellow and your limbs have suction cups attached to them, of course. Your suspicion level is dictated via a meter at the bottom of the screen, but fortunately, only the most outrageous behavior will cause it to rise sharply. You can create a fair amount of accidental (or intentional, I suppose) carnage before you have to worry about any real consequences.

That's good, because half the joy of the game is just watching Octodad's ridiculous attempts at normal behavior go awry. Grabbing and holding anything with your right "arm" most often results in a variety of objects being knocked around, and even just trying to position Octodad into the places required to achieve objectives is an effort unto itself. It's worth noting that for a game that's largely about wild limb gesticulation, it controls pretty well. It can be a bit flustering when an arm just doesn't seem to want to line up with an object you're trying to grab, or your legs won't navigate around objects as easily as you might like, but most of the game's early levels don't require you to do anything too strenuous anyway. For instance, the second chapter just revolves around Octodad getting out of bed, making coffee, and doing some light household chores. The challenge of accomplishing those tasks is entirely baked into the goofy control scheme and the resulting destruction.

It's simple, but smartly designed stuff, underpinned by terrific visuals and some sharply written dialogue. Octodad doesn't really speak so much as he blubs in highly specific tones as his human wife, son, and daughter all try to converse with him. The set-ups for these exchanges are all pretty great, and go a long way toward making Octodad into a more endearing character, especially in the opening chapters of the game. It's in these sections that you can most plainly see the slapstick inspirations of the game's premise. In these parts, Octodad almost feels like a lost Warner Bros. cartoon character, forced to try and maintain his double life, all while the aforementioned crazed foreign chef tries in increasingly desperate and homicidal ways to convince everyone else of Octodad's true identity.

It's how Dadliest Catch chooses to pay off this premise toward the end that the game ultimately falters. Much is made early on about Octodad's aversion to the local aquarium (for obvious reasons), but eventually he ends up there with his family anyway. This section starts out nicely, with Octodad spending time with each member of his family in a different section of the aquarium, playing some minigames and bonding with his kids (and trying desperately to distract his wife from asking too many questions about his past). But then things take a weird turn. A flashback sequence takes you to a fishing boat and the first moments of Octodad's false identity, and it all plays out as, of all things, a stealth sequence. Dadliest Catch controls just fine when you're just trying to do simple chores or navigate around some elaborately designed environments, but when you have to try and actively avoid anyone spotting you, there are just too many variables to navigate to avoid obnoxious bouts of trial-and-error. Everything up to this point is pretty breezy and silly, but suddenly the game is asking you to be more precise and sneaky in your movements, and it doesn't really work.

Unfortunately, the entire back third of the game is like this. The last two chapters require more stealth, attack dodging, and careful (yet quick) platform navigation, none of which line up well with how the game actually controls. These sequences aren't impossible by any means, but they're far more frustrating than the lightweight goofs of the early game, and often it feels like you're succeeding more on accident than through any actual mastery of the controls. It doesn't help that the story takes a strange turn around this time as well, one that is surprisingly willing to abandon the whole "secret octopus" concept the game was, up to this point, entirely predicated upon.

If I'm especially disappointed by these parts of Dadliest Catch, it's because the first couple of hours are so good. These opening chapters are ridiculous and delightful, a wonderful blend of purposely ramshackle control and physics-based insanity. Yes, the game is only about three hours long on a single playthrough, provided you aren't painstakingly picking through every environment looking for secret ties or bonny hats to decorate Octodad with. It being a short game is hardly a terrible thing by itself--in fact, too many hours of just crashing through environments probably would have gotten old after a point. The issue is that the game doesn't always make the best use of the time it has. It loses both narrative and comic momentum as it ambles toward its conclusion, which makes those frustrating gameplay sections sting all the more.

Still, in spite of its issues toward the end, I enjoyed more than enough of Dadliest Catch to recommend it. When this game is at its best, it's exquisitely silly, genuinely funny, and even kind of sweet, in its own demented way. There's certainly reason to go back and play through it again, including a strange, but clever co-op mode (in which up to four players can control different parts of Octodad's body), and Steam Workshop support for user-made levels. Even when it falters, Octodad: Dadliest Catch is a likable game. It's only disappointing by virtue of the fact that with a few of its design and story quirks worked out, it could have been a lovable game instead. 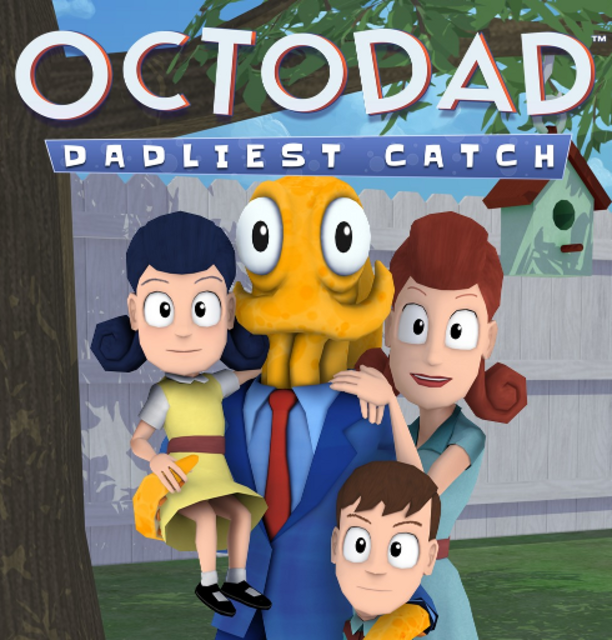