by Brad Shoemaker on May 4, 2011
Share:TwitterFacebookReddit


Now that last year's ill-conceived top-down zombie shooter Dead Nation is fading into memory, Finnish developer Housemarque is back on the right track with Outland, an eye-popping 2D platformer that owes equal debts to Metroid and--of all things--Ikaruga. That odd combination results in a tightly designed downloadable game bursting with demanding traversal, surprisingly deep combat, and lush visual design. You can't be a fan of 2D action games in 2011 and not give this game a look.

Outland stops short of rendering its entire playable area on one giant graph-paper map, but the game's five areas are loosely tied together by level exits and teleporters that feed you fairly smoothly from place to place. You don't quite get the feeling of continuous exploration that you'd want after playing games like Shadow Complex or the latter day Castlevanias, but it's close enough. Though Outland is more linear and requires much less backtracking than those games, there are still areas you won't be able to access till later on, when you've acquired abilities that let you slide under things, launch into the air, or bust down walls with a charged shot.

The sword combat is more involved and thus more satisfying than you'd expect on first glance. In addition to a basic three-hit combo, you can slide into enemies to daze them or slash upward in an uppercut-like motion to pop them up into the air. You can incorporate all of those moves into a single attack on an enemy, sliding into them, popping them up in the air, then leaping up and finishing them off before they even have a chance to hit you. It's a ton of fun. Both the fighting and the platforming are snappy and fluid, allowing you to get around the levels and fight enemies with speed and grace.

It's a good thing you've got such precision control, because nothing about Outland's action is more demanding than its central reliance on a red-and-blue contrast that governs how you interact with enemies, platforms, and masses and masses of colored bullets. (There's that Ikaruga connection.) You can change yourself from one color to the other in a split second, which is a good thing, because you have to do that instantly, constantly, all the time to get by. You can only damage enemies of the opposite color, but you can only absorb bullets and stand on platforms of like color, so you get into lots of creative situations where you'll be switching colors every second or two to keep up. Like the combat, it's greatly satisfying to flip your alignment rapidly to get through some of the tougher scenarios cleanly without taking damage.

The game ramps up the difficulty of these two-tone scenarios gradually--it's the better part of an hour before you can even assume both colors--but by the end of the game, you'll be looking at some downright grueling challenges that force you to navigate enormous clouds of mixed bullets while fighting enemies that change their own coloration randomly and will shock you if you hit them at the wrong time. Oh, and you're standing on platforms that disappear out from under you when you flip colors. For the most part, you'll get through these sections with patience or trial and error (or both), but some frustration is inherent in the later levels.

As demanding as the action is, the game's presentation could be a little clearer. The camera tends to pull out to such a degree your character is sometimes only a few pixels high, making it tough to see exactly what's going on if you don't sit especially close to your TV. And someone made the needlessly confusing decision to have your character flicker blue and red when you get hit, which sometimes made me do a knee-jerk color change that made me get hit again before I realized that it was a bad idea to change color in the first place.

I have no reservation calling Outland an absolutely beautiful game. Housemarque does a lot with a little here, employing a silhouetted art style similar to Limbo but with Tron-like red, blue, and yellow highlights applied to the characters in mostly tribal patterns that make them stand out and help highlight the tremendous animation. The backgrounds look like spare watercolor paintings with a lot of gentle light blooming and copious parallax scrolling to give them detail and depth. The five major areas look significantly different, with motifs ranging from a lush green jungle to dank caverns and frigid, mountainous peaks. Every screen of this game makes a great argument for why 2D games still matter from an artistic standpoint.

Outland's main campaign will probably run you about six hours, the high quality of which more than justifies its $10 asking price, and there are collectibles, speed-run levels, and some decent two-player cooperative challenge rooms if you want to lengthen the experience. I suspect this game is going to fly a little under the radar with so many high-profile titles releasing lately, but even a passing interest in 2D action demands that you at least give Outland a look.
Brad Shoemaker on Google+
Load Comments 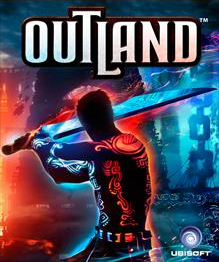