by Jeff Gerstmann on August 7, 2012
Share:TwitterFacebookReddit

People typically don't come to fighting games for the story. But then most fighting games aren't based on long-running role-playing franchises, either. Persona 4 Arena marries a competent fighting system from the folks at Arc System Works with the characters and storytelling prowess of Atlus' Persona franchise. It's a weird mixing of genres that might leave diehard fans on either side of the genre line wondering if they'd even be capable of fully enjoying the game. But it ends up working out reasonably well. If you don't care about the Persona universe, you get a fast-paced 2D fighter that feels like a slightly more accessible release than most of what Arc is known for these days. And if you care about the characters and happenings of Persona 4 (and, to some extent, Persona 3), you'll get to spend a bit more time with those characters and as you check back in and see what they've been up to now that the Inaba murder case has come to a close.

The story is set two months after the events of Persona 4, and the main character, now officially referred to as Yu Narukami, is heading back to town during the Golden Week holiday to visit the rest of the Investigation Team. That night, the Midnight Channel goes back on the air with an ad for a fighting tournament featuring the core players from Persona 4. Between that suspicious occurrence and the disappearance of a few of their members, the high-school students plunge back into the TV world to figure out what's going on. Inside they find a fighting tournament and a handful of strangers--key characters from Persona 3 and Labrys, an all-new character designed specifically for the game. As you might expect, much of the story is concerned with Labrys, who has direct connections to Aigis and other P3 characters. You'll also see her forge bonds with members of the P4 crew along the way. In short, it's a nifty bit of fan service that lets you check in on a few Persona 3 characters, who have grown up a bit, and the Persona 4 characters, who haven't really changed a whole lot, but again, only two months have passed since we last saw them in action.

The story mode has you select one character at a time, and you'll see the events unfold from that character's perspective. You'll rarely fight in the story mode, and the battles you do encounter there are one-round affairs that feel like they're set on an easier difficulty setting than the rest of the game, almost as if the developers expected that people who might not play a lot of fighting games would be spending most of their time there. Outside of these sparse fights, Persona 4 Arena's story mode is a straight-up visual novel. Page after page of unvoiced text comes your way, usually in the form of your character's inner monologue. When you encounter another character, some spoken lines of dialogue show up, but even then your character is spewing out tons of lines in his or her head.

If you honestly care about the universe and its characters, you'll probably take what you can get in whatever format you can get your hands on, but at times this story feels like it'd be better suited for a short manga series than a video game. You'll occasionally get an opportunity to choose one of two responses, leading to some very light branching, and you'll have to play up to a moment just before the story's climax with a number of characters before unlocking the characters that will tell you the whole tale. You'll also see the same three or four cutscenes more than a couple of times as you play through with multiple characters. It could be better... but as someone who was already hooked on the idea of hearing more about the Persona 4 cast I quickly became enthralled with learning more about how the Persona 3 fighters fit into all this. Either way, the story leaves things in an especially interesting spot that could make for some cool Persona sequels down the line. But maybe you don't care about any of this.

Outside of that story mode, Persona 4 Arena behaves like a "normal" fighting game. It has a lesson mode that teaches you the basics of P4A's various systems and mechanics. A challenge mode gives you combos for each character and, unlike a lot of other fighting games with similar modes, it'll demonstrate the combos to you in order to help you learn the appropriate timing. It also has an arcade mode, which boils the story down to its bare minimum, a versus mode, training, a gallery to hear all the voicework and view unlocked story art, and so on. It also has online play with the requisite lobby battle option that lets up to eight players congregate and fight. There's also a neat title system that lets you piece together unlocked words into your own silly, descriptive phrase. I went with "Forbidden Honey-Roasted Romance."

P4A is a four-button game with special moves that are mostly easy to execute, even on a standard gamepad. It's heavily reliant on quarter-circle motions with only a few exceptions, and those are usually easy charge moves. There's even an auto-combo that comes out if you keep mashing the weak attack button, giving beginners some guaranteed damage if they can land it and giving more advanced players something to burst out of or avoid entirely. Though it's not quite as esoteric as some of Arc's other work, it's certainly more than just comboing crouching medium kicks into fireballs all day long. You can double jump, air dash, initiate mid-air turnarounds, and two of the attack buttons call out your character's Persona--just pretend I said "stand" or "weird spirit ghost" if you're not sure what that is.

The Persona comes out for some specials (Yukiko calls her Persona out to cast fire spells in your direction, Yosuke calls upon his for wind attacks, and so on) and can be batted away with normal attacks, which can lead to a "Persona break." It should suffice to say that it's more complicated and systems-heavy than the typical fighting game, but if you've gotten at all familiar with previous Arc games, you'll probably find it all to be at least somewhat self-explanatory. As a fighting game fan that tends to dodge games with a ton of various systems and mechanics, Persona 4 Arena is the most appealing and accessible game Arc has made in years--but then I can always fall back on the part of me that is still borderline obsessed with Persona 4 for comfort. Even after playing the heck out P4A and attempting to learn all the different systems I'm still finding myself getting absolutely eaten alive when playing online.

The netcode in P4A seems fine on the PlayStation 3 and decidedly less fine on the Xbox 360. You may have seen this coming, as reports from Japan indicated that this was already a problem over there, but on the 360, this appears to manifest itself as a consistently awful second round. After one round of proper, decent-feeling fighting, round two seems to run at two-thirds of the normal speed for a bit before snapping back into action and finishing clean. Atlus claims a patch is on the way, but if you're making a choice right now, choose PS3. The PS3 version also has an optional install to help you speed up load times.

So if it wasn't for the Persona hook, I doubt I'd stick with P4A... but it's a hell of a hook. Getting the opportunity to check in with these characters is a real treat, even if it comes as a wall of text. It's full of recognizable locations and familiar music from the Persona franchise, as well, which helps tie all the fan service together into a great little package. Alternately, if you're a fan of Arc's previous work, you'll probably have an enjoyable time with the fighting. But you should realize that these are pretty specific groups and this is a pretty specific recommendation. If you don't fall into one of those groups, you'll probably just find the whole thing confusing. 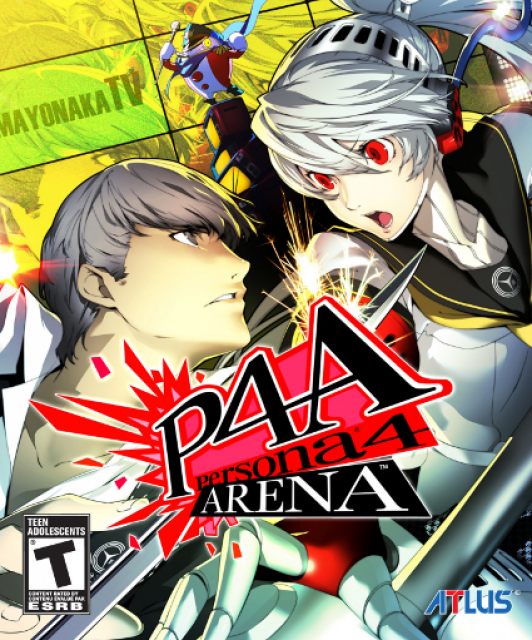