by Jeff Gerstmann on May 5, 2010
Share:TwitterFacebookReddit

Picross 3D's twist on the traditional picture crossword takes a bit of work to learn, but it's terrific fun.


Nintendo's Picross games mostly stayed in Japan, but Mario's Picross for the Game Boy was enough to get me hooked on this type of logic-based number puzzle. If you're not familiar with it, it's easiest to say that it resembles Sudoku with the way you must take a logic-based approach to completing "picture crosswords." Nintendo released Picross DS back in 2007, which continued on in much the same way. But Picross 3D, as you might ascertain from its name, is different. It takes the same basic idea from the flat, 2D Picross puzzle and applies it to collections of cubes. The extra dimension packs in a lot of extra challenge, too, making this collection of over 350 puzzles a great, long-lasting choice for anyone looking for DS-based puzzles.

Before you can solve puzzles on your own, you'll need to know the rules of the game. Essentially, you're chipping away cubes that don't belong while marking the ones that do, and you'll eventually form some sort of object. Numbers on the sides of the cubes clue you in about which ones are which, and you'll have employ your powers of deduction to come to the right answer. While it seems extremely complicated at first, Picross 3D breaks each facet of play down into its own tutorial segment. Between learning new techniques and then trying them out yourself, you'll probably spend the first 30 or 45 minutes just getting up to speed. No one rule is especially tricky or difficult to understand on its own, and the pace sets you up and teaches you the rules really well. Once you're turned loose, the game simply presents you with one puzzle after another, broken out into levels, which are further broken out into difficulties.

As you chip away at blocks and form identifiable objects out of them, you'll be racing against the clock and attempting to avoid mistakes. Completing puzzles quickly earns you one bonus star, while completing a puzzle without making any errors earns you another. Stars are used to unlock bonus puzzles, which appear at the end of each normal level. Whenever you complete a puzzle, the revealed object colors in and animates a bit. So you'll see a whistle make a blowing animation, or a flip-style cell phone flip open and shut a few times. It's a minor addition that makes completing a puzzle feel like a bit more of an accomplishment.

Though there's a bit of time-related pressure in Picross 3D, the game definitely lets you play at your own pace with a quick save option that lets you quickly get out of a puzzle in case you need to turn your DS off. Of course, the DS' built-in sleep mode works pretty well for this, too.

There's some basic online functionality in place to let you download regular puzzle updates from Nintendo, as well as upload puzzles you make in the game's puzzle creator as contest entries and so on. Locally, you can exchange created puzzles with other players, as well as send over a trial version of the game.

Soothing music helps round out the package. There's a decent variety to the background audio, but whenever I'd get extremely serious about playing Picross 3D in long stretches, I eventually had to turn the volume down and play some music of my own. Maybe I just like to be on edge when I'm getting my logic on, I don't know.

Picross 3D is one of those great examples of the "easy to learn, difficult to master" philosophy of puzzle-solving. You'll pick up the basics easily via the game's great tutorials, and solving the easy puzzles quickly becomes second nature. But once you have to start using the game's tools to cut away sections of the puzzle so you can mark and blast blocks on the inside, it starts to require more and more spatial awareness. In other words, Picross 3D gets hard. But it never feels impossible, and it's the sort of game that causes afternoons to simply vanish. If you're looking to do a little time-traveling, Picross 3D is a great way to do it.
Jeff Gerstmann on Google+
Load Comments 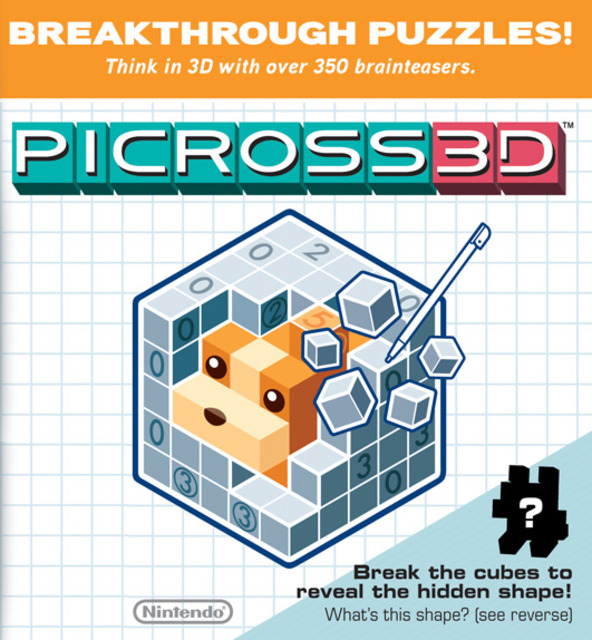