by Brad Shoemaker on March 25, 2011
Share:TwitterFacebookReddit

Nintendo's latest fanciful flight sim is fun enough for a few minutes at a time, but won't provide you much lasting value.


Like the Super NES and Nintendo 64 before it, Nintendo's new 3DS arrives this weekend with a Pilotwings game nestled in its launch lineup. If you were around for the releases of those hallowed old consoles, you probably remember Pilotwings as "the thing you put in occasionally when you got tired of the new Mario game." But there's no Mario game, nor a Zelda, nor even the new Kid Icarus on shelves alongside the 3DS yet. On its own merits, Pilotwings Resort is a reasonably fun, low-impact flight simulator to play in short bursts, and it's a good showcase for the fancy 3D effects in this new handheld. But taken as the marquee first-party title at the 3DS' launch, Pilotwings Resort feels like a pretty thin offering.

The game offers three modes of aerial transport--a biplane, a rocket belt, and a hang glider--for use in its various events. You'll go on to unlock suped-up versions of these vehicles as you complete more events that handle a little differently, but in terms of gameplay styles, those three categories are basically all you get. Most of the variety comes from Resort's five tiers of objective-based missions. In some of the more interesting levels, you'll be tasked with taking photos of specific landmarks as you sail around on the glider, shooting at balloons released by a speedboat below you, or collecting a group of wayward little UFOs and returning them to their mothership hovering offshore. The flight physics and core controls feel tight but relatively forgiving, and make a great case for the precision and usability of the new analog circle pad on the 3DS. I wish there were more examples of these clever objectives, but it feels like the bulk of the missions focuses on more basic activities like flying through rings, flying through rings quickly, and, uh, flying through rings upside down.

Despite some repetition in the mission design, Pilotwings Resort is a good diversion when you want to flip your 3DS open and just play something for 10 minutes. But it's over too fast; there's just not a lot of meat to sink your teeth into. Each successive tier of missions requires you to earn a certain number of stars in the previous one before you can unlock it, but even with that requirement, I got through all of tiered the missions in a couple of hours. There's also a free flight mode where you collect various trinkets and do stunts as you explore the island, but this mode doesn't feel particularly "free," since it's initially limited to only two-minute bursts of flight time. You can unlock longer sessions, different times of day, and a model viewer by collecting more items, but that stuff doesn't provide much lasting value since you're still flying around the same small landmass over and over. Then you can view your stats. Then you've seen just about all there is to see in Pilotwings Resort.

Nintendo has done a good job bringing Pilotwings up to speed with the look and feel of its other Mii-ridden first-party fare. The game takes place on Wuhu Island, the same tropical getaway that made games like Wii Sports Resort and Wii Fit Plus feel so festive, and of course your system-level 3DS Mii appears front and center to pilot all of the game's aircraft. Pilotwings Resort doesn't offer a mindblowing level of graphical fidelity--its rendition of Wuhu Island looks qualitatively pretty similar to what you've seen on the Wii--but flying around its lighthouses, bridges, and rocky outcroppings gives you a good chance to mess around with the 3DS' sense of depth. Personally, I found Pilotwings' sweet spot to be with the 3D just barely enabled, providing just a subtle touch of depth without feeling overwhelming. Pushing the 3D slider much past the quarter-full point made it really hard for me to focus and resulted in the image appearing to split in two, but the 3D looked great at that lower level. As with every 3DS game, your experience will likely vary from game to game, and from person to person.

On its own merits, Pilotwings Resort offers lighthearted flight action that's fun enough while it lasts, but it just doesn't last very long. As if the brevity of the mission lineup weren't enough, there's no support for StreetPass or the 3DS' other nifty system-level features that would have let you further explore all the cool stuff your new handheld can do. Given the 3DS' relatively meager launch lineup, Pilotwings Resort is worth having in the early adopter's collection as a technical showpiece and an occasional distraction, but without a stronger Nintendo game to distract you from, the experience is fleeting.
Brad Shoemaker on Google+
Load Comments 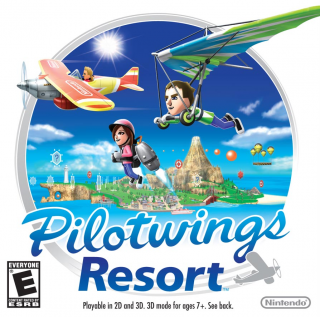