by Ryan Davis on April 19, 2011
Share:TwitterFacebookReddit

Valve falls further down its own rabbit hole with this expansive sequel that retains the cynical heart of the original Portal, while blowing out the scale on virtually every aspect of the execution.


After the end credits roll on Portal 2, it's kind of hard to believe that this series had its humble beginnings as a student project called Narbacular Drop, which itself just laid down the basic mechanical framework for the kind of fourth-dimensional puzzle-solving of the original Portal. Even the original Portal was all but defined by its tight focus and limited scale; it just executed on all those elements with a consistent, almost preternatural level of ingenuity and humor.

I use the somewhat dismissive "just" here because the challenges of following up something so inventive and so universally well-received are arguably greater than coming up with the core concept in the first place. The element of surprise was a significant factor in the impact of the original Portal, but going into Portal 2, you know how a portal gun works, you know that Aperture Science is essentially a less diabolical, but equally irresponsible counterpart to Half-Life's Black Mesa, and you know that GlaDOS likes testing, but loves murder.

With these known quantities in mind, Valve does about the smartest thing it can with a full-blown sequel to such an effectively minimalist package by tossing out many of the self-imposed restrictions of the original and largely ignoring the temptation to lean on lots of easy callbacks. What it lacks in the surprise punch the original packed, it makes up for with scope and scale, couching that now-familiar combination of deadpan humor and brain-boggling puzzles in a game that's significantly bigger and more robust in virtually every meaningful way, but without feeling any less dense.

Since the apparent "death" of GlaDOS at the end of Portal, the Aperture Science Research Facility has gone to seed. After you're awoken from a hibernation chamber disguised as a cheap hotel room by a friendly, motormouthed AI called Wheatley--voiced with a terrific nervous energy by British humorist Stephen Merchant--it's not long before you're once again running a series of "tests" for a revived and coolly vengeful GlaDOS. It would be charitable to characterize GlaDOS as indignantly sociopathic, and her lust for punishing you for your past transgressions is riper than ever.

I'll avoid any specific plot points, but suffice it to say that your journey takes you far deeper into the bowels of the facility than the original game even hinted at. This journey also serves as an Aperture Science history lesson of sorts, providing a glimpse of the company's dated industrial aesthetics through the decades, and introducing you to company founder Cave Johnson--another terrific performance, this time courtesy of perennial tough-talker and boss-man-type J.K. Simmons--as well as the evolution of the company's absurd corporate culture that would eventually give birth to GlaDOS.

The visual style of Portal 2 seems to be in direct defiance of the tight, hermetic feel of the original, eschewing that singular aesthetic in favor of many shades of grimy, long-forgotten industrialism and cavernous spaces that hint at an almost deliberate carelessness. Everything is hastily built on top of everything else, which leads to environments that are haphazard, impossibly dense, and almost constantly in jeopardy on collapsing in on themselves. In fact, the game can be so propulsive that it's easy to blow right past lots of terrific, often funny set details.

And the puzzles. Oh, the puzzles! Having already introduced the core tenets of how portals work in the first game, Portal 2 runs far more briskly through the fundamentals, and introduces a slew of previously abandoned Aperture compounds and technologies to help constantly re-complicate things for you. Like the original, though, Portal 2 smartly introduces each idea one at a time before requiring you to use them in concert. At a point it can be easy to lose sight of the fundamentals as you get caught up in all these new-fangled gels, laser-bending cubes, hard light bridges, tractor beams, and more. Don't forget! It's called Portal 2 for a reason.

A certain amount of trial-and-error is a necessity in solving many of the puzzles as you boggle out which buttons activate which contraptions, and how you'll need to harness them to get to the other side. While a certain amount of crackerjack timing is key to solving some puzzles, brains almost always trump reflexes, and if you find yourself struggling with the controls--regardless of whether you're playing with a mouse and keyboard or a controller--you're probably doing it wrong.

Being several times the length of its predecessor, with puzzles that are as hard, if not harder, pure mental fatigue can also be an issue in Portal 2. While the game is constantly luring you forward with the promise of new visual treats and consistently sardonic dialogue from the expert voice cast, a short break can mean the difference between sussing out the solution and turning your brain into a potato.

Once solved, the puzzles themselves offer little reason to revisit the single-player campaign--which, in some ways, ends much more climactically than the original--though I still found being able to focus more on the game's plentiful gags on my second time through to still be quite fulfilling. Additionally, there's an enlightening developer commentary track provided by key members of the team at Valve that can be absolutely fascinating in its own right.

Portal 2 also sports an equally well-crafted co-op campaign, casting you as one half of a gangly, curiously likable robotic odd couple built by GlaDOS for the specific purpose of running through her diabolical test chambers. It's much less story-intensive than the single-player game, though having sets of portals with which to solve the puzzles, while also being fundamentally dependent on another player's puzzle-solving abilities, can unsurprisingly complicate things. This mode features a "ping" tool which allows you to better direct your partner, though I found voice communication to still be an absolute necessity. Frustration looms throughout Portal 2, though if you're not operating at the same speed as your partner, you don't know your partner well enough, or, God forbid, you know your partner too well, it seems more likely to rear its head during the co-op campaign.

Despite being so much bigger than the original, I actually felt a little melancholy once Portal 2 was over, simply because it's so rare to find a game this smart, this funny, and this rich with detail. It elevates Portal from an odd, memorable experiment to one of the most significant series in Valve's stable with a unique voice and an incredible level of quality that all developers should aspire to.
Load Comments 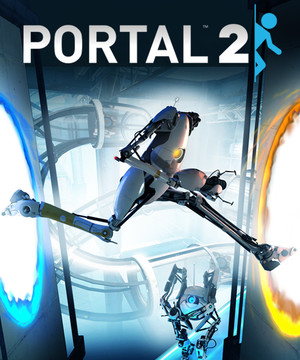