by Ryan Davis on November 24, 2010
Share:TwitterFacebookReddit

It's too little and far, far too late for this shoddy, low-rent rhythm game also-ran.

The timing could not be worse for PowerGig: Rise of the SixString. This is a rhythm game in the band-style format, not far from what Rock Band and Guitar Hero have been doing for a few years now, and its primary selling point is that it comes with a real guitar that you can play the game with. Not a fundamentally bad idea. Problem is, PowerGig has the misfortune of going up against Rock Band 3--an already established and recognizable franchise--which effectively did the same thing, and did it way, way better. Actually, even if the competition weren't so fierce, PowerGig is a substandard product across the board. The story mode, the song selection, the presentation, the number of players it supports--everything about PowerGig feels awkward and listlessly realized, as though the developer was unaware that there were already two, fiercely competitive franchises chasing after the same customers.

As it's one of the defining characteristics of PowerGig, let's talk about that guitar. The underlying notion that using an actual instrument can make the mock-and-roll experience feel more real seems sturdy enough, but PowerGig fails utterly to make good on this promise. Disregarding the three-quarters size and the chintzy plastic body for a moment, this is an actual, functional electric guitar. It feels cheap and it's a difficult instrument to keep in tune, but these facts aren't really material to this review, or the game. What is material, though, is that playing PowerGig with this guitar is uncomfortable as hell, and the game itself never really capitalizes on the fact that you've got a real guitar in your hands to justify that discomfort.

By default, PowerGig is a five-button guitar game, not unlike what you'd expect from Rock Band or Guitar Hero, though it uses its own style of notation that's difficult enough to read that it kind of explains why Activision would be willing to pay Harmonix the licensing fee to use that familiar note highway. There is also a power chord mode, which expands on the complexity a bit by recognizing the individual strings and asking you to make some simple two-finger power chords. Even in this power chord mode, though, you're still limited to the five frets you use for standard play, and the game makes no pretense about any of this being useful for actually learning how to play guitar. I feel like this should be implicitly obvious, but in case it's not, you cannot use the PowerGig guitar to access the pro mode functionality in Rock Band 3, not that that's a reasonable expectation.

You can choose to play PowerGig with a standard Rock Band or Guitar Hero compatible controller, which is certainly a more comfortable, if less authentic, experience. Even with a better controller, there's still the unique quirk of not being able to use those controllers' built-in tilt functionality to trigger PowerGig's version of star power or overdrive, instead requiring you to press the select button. As a baffling counterpoint that flies in the face of the authenticity that PowerGig's six-stringed controller seems to strive for, Seven45 Studios has produced its own AirStrike drum kit that uses special drum sticks, and, I dunno, lasers I guess, to interpret your Metallica Drummer routine into actual gameplay. I won't even get into the fact that the bounce-back from striking something is an integral part of the real drumming experience, because the rarity of the AirStrike drums means that I've never actually handled a set myself. As far as I can tell this hardware is being made available almost exclusively through the developer's website. Smartly, PowerGig supports the drum controller you probably already have in your home.

In addition to guitar and drum controllers, PowerGig has microphone support. But in another move that can only be characterized as deliberately befuddling, there's no discrete bass guitar part, limiting your band play to a three-piece. Before you can get to the sub-par plastic band action, though, you must first suffer PowerGig's weirdo fantasy story mode, which is corny and self-serious in equal measures, and spends way, way too much time exhaustively explaining the tribal power structure in this stupid, rock-inspired universe. Without a library of downloadable content to rely on, PowerGig really lives or dies by its on-disc track listing, which is 100 percent leftovers. There are some recognizable artists in the mix, including folks like Eric Clapton and Dave Matthews who have up to now been staunchly opposed to the whole plastic-band idea. I suppose it's only fitting that these luddites would end up hitching their wagons to this lame horse. But even when it's bands you've heard of, chances are the songs themselves aren't the ones you'd want.

After some serious consideration, I cannot come up with a single good reason why someone would buy PowerGig: Rise of the SixString. Even morbid curiosity is hard to justify.
Load Comments 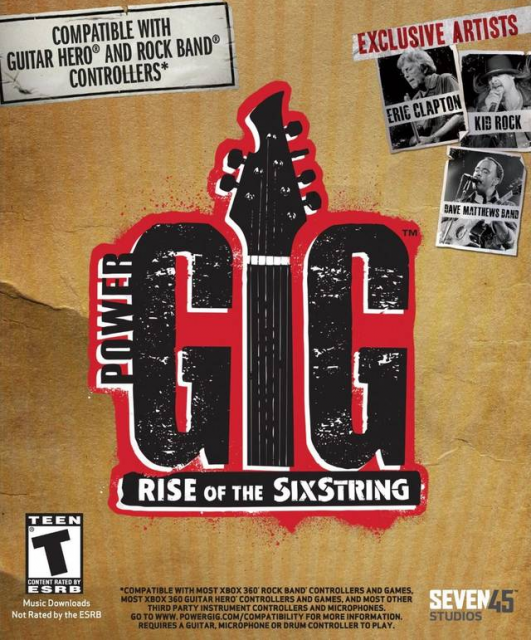