by Brad Shoemaker on July 9, 2010
Share:TwitterFacebookReddit

Infinite Interactive takes it back to basics in just the right way with this sequel.


For the first couple of days, I couldn't put down Puzzle Quest 2. It sort of defies conventional wisdom that this first real sequel should somehow be more addicting than Infinite Interactive's breakout hybrid puzzle RPG, especially since the company's efforts in between have been less than thrilling. But it's actually because Puzzle Quest 2 is effectively more of the same, and doesn't stray too far from the first game's successful blueprint, that its marriage of puzzles and role-playing is still so appealing.

Some of Infinite Interactive's other puzzle/RPG hybrids, like Galactrix and Neopets Puzzle Adventure, tried too hard to change up core elements that didn't need changing. No such problem here. Instead of trying to get fancy with new and overly complex puzzle mechanics, the developer kept the part that worked in the original game, namely the traditional match-three puzzle gameplay. But the puzzle-based battles are leaner and more focused on strategy than before. Extraneous pieces like experience gems and coins are gone; now it's just five types of colored mana (for spells), gauntlet-shaped action pieces (for weapon attacks), and skulls (for direct damage) on the board.

With five types of mana available, there's a greater diversity of spells at your disposal and a wider range of ways you can use them to interact with the pieces on the board and then create utterly devastating combination attacks. The types of spells available depend on your character class-- barbarian, assassin, templar, or sorcerer--and naturally cater to different play styles. I played the hearty, all-around barbarian on the DS version before switching to the less survivable but deadlier assassin on Xbox Live Arcade. Discovering the ins and outs of your class and finding the most efficient ways to slaughter all the monsters in your path is one of the best things about the game. There's a lot of strategy and a tangible, rewarding sense of progression involved.

The way you level up and build out your character has a huge effect on how successful you are in battles. The other reason I couldn't stop playing the game is because Infinite crammed almost as much Diablo into this game as it apparently could. You find green- and blue-coded loot. You can craft better items out of component materials. Quest givers dispense tons of story-related and optional missions to undertake. Heck, it's so Diablo-like that you start off in a single town with the entrance to a sprawling, multi-level dungeon right outside it. Some of these RPG elements were present in the first Puzzle Quest, sure. But like the puzzling mechanics, they also feel more streamlined and cohesive here, and they give you a great reason to keep pushing forward through the increasingly dangerous catacombs.

The famously lucky AI (some called it "cheating") from the first game is basically nonexistent in this sequel. Enemies rarely get those ridiculous six- and eight-part cascading matches they would routinely get in every battle last time, and even when they do, the effects are far less devastating. If anything, the game almost got too easy as I leveled up, crafted better gear, and figured out more powerful ways to put together all the spells (of which you can only equip five at a time) I was unlocking. Of course, it's always a good idea to prevent the enemy from matching skulls to attack you with, but when you've got a poisoned dagger that does six damage every turn for eight straight turns, a sword that hits for 17 in a single swipe, and spells that can do anywhere from 40 to 100 damage in a single combined assault (depending on the layout of the board), it almost feels like a waste of time doing a paltry three to five damage by matching skulls yourself. I loved the way the combat dynamic evolved to focus more on my unique skills and equipment as my character got more powerful.

The game does a great job of mixing up the standard puzzling combat with a surprising number of minigame types. These are all variations on the match-three theme that make you do things like matching a quota of specific mechanical gems to pick a lock, matching various types of treasure to determine the quality of loot you'll get from a chest, or filling in a minimum number of squares on the board to bash open a door. These minigames pop up frequently enough and in sufficient variety that you never feel like you're doing too much of one thing at any given time (and even the boards in the battles themselves change pretty dramatically in size and composition, based on the enemy type). For further diversion, all these minigames are available for you to play from the main menu as well, and you can play multiplayer against other players' characters if you feel like it.

Looking at screenshots, you might get the impression Puzzle Quest 2 is a full-on dungeon romp, but you don't actually do much exploring. The dungeon screens aren't much more than glorified menus where you click on doorways or characters you want to interact with, and your character merely moves along predefined paths between these points of interest, fighting the enemies that get in the way. This limitation didn't bother me much, since you're still getting to see new areas and enemy types on a regular basis, and there's still a decent amount of freedom to explore the parts of the dungeon you want to explore.

What did sort of bother me was the presentational issues the game has. The DS game is a fair sight smoother and better-looking than the original DS game was, but it can still bog down a bit when a bunch of gems are moving around at once. The minigames on the XBLA version use smaller gems and game boards than the battles, for no apparent reason, and they can be hard to see if you're sitting far from your TV. Neither version communicates information as thoroughly as it should; you're presented with a bunch of arbitrary numbers on the interface around the board, and you have to intuit what they mean over time since there isn't any notation to fill you in. There are a few other nagging issues, like the way tooltips take a second to pop up every time you highlight an item. None of this stuff detracted too much from my enjoyment of the game, but it would be nice if it had a cleaner visual impression.

It's nice to see Infinite getting back to what made Puzzle Quest great in the first place. This sequel does a fine job of keeping and improving on the good parts while layering on the sort of character progression and strategy that makes you want to keep plowing ahead, long after the game would have otherwise gotten boring. I'd lean toward recommending the Xbox version because, well, I like achievements, and because it's half the price of the DS cart. But whether you want to play on the couch or on the go, Puzzle Quest 2 is a great way to wile away a few minutes, or a few hours.
Brad Shoemaker on Google+
Load Comments 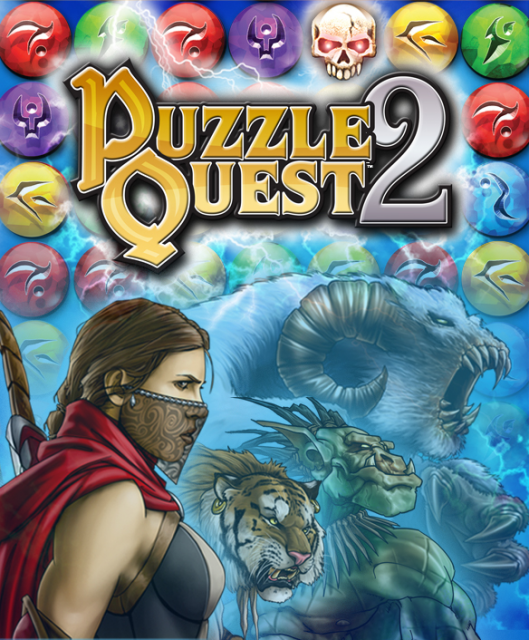