Ratchet & Clank: All 4 One Review

by Patrick Klepek on October 19, 2011
Share:TwitterFacebookReddit

Ratchet & Clank with multiplayer is strange, crazy, and mostly fun...but might not be for you.

There aren’t many big studios making platformers anymore, but like Mario, Ratchet & Clank has proven a mostly reliable companion for the platforming fan, especially if you also love shootin’.

All 4 One is a multiplayer take on the Ratchet & Clank series, a prospect that sounds rather fantastic on paper, especially given how well Nintendo was able to adapt its premiere platforming series into a maniacal, sometimes too crazy four-player bonanza in New Super Mario Bros. Wii. The mechanics driving Mario and friends are pretty basic, however, which is not necessarily the case for Ratchet & Clank, a series that’s deceptively simple.

To go into All 4 One thinking it’s just another Ratchet & Clank that happens to have multiplayer is a mistake--you should know that up front. If you won’t play All 4 One with one or more people, there’s not much for you here. All 4 One ditches the exploratory aspects of previous Ratchet & Clank games in favor of a very linear, focused experience. In single-player, the game spawns an AI-controlled Clank to ensure the co-op parts are playable. While the AI is certifiably competent, it’s not a very fun solo game--the action is fairly straightforward, with weapon choice meaning little and puzzles staying simple.

All 4 One’s hook relies on having a blast because things are becoming totally insane around you, by virtue of four people and a million enemies running around at once. The times where I’d actually play with four people, it would become nearly impossible keep track of everything, as explosions would constantly fill the screen to the point of obscuring your view entirely. All 4 One doesn’t have a particularly punishing death mechanic, however, so when the combat causes the screen to implode into a series of indecipherable fireworks, it’s not a big deal. Players can be quickly resurrected without consequence by another player, and the group only goes back to a previous checkpoint if everyine is unconscious at once, which isn’t common.

I don’t really recommend four players if you’re looking to actually play the game--it’s mostly dumb goofiness, like New Super Bros Wii. Two people seemed like the sweet spot here, learned while working through most of All 4 One with a friend by my side.

For most of All 4 One, the pacing is fast, frenetic and enjoyable, with transitions from standard combat to quick puzzles at a rapid pace, typically punctuated with a variety in the form of a rail grinding, strapping on a jetpack, piloting a space ship or maneuvering a boat. Even with two people, trying to coordinate movement is mostly impossible, which usually resulted in a room full of laughs as disaster ensued.

Insomniac Games must also be commended for fixing a problem that’s plagued co-op platformers. So many casual game fans struggle with platforming, and waiting for one person to make it through a section you finished minutes ago is not only frustrating, it’s actually lead to annoying arguments I'd rather not repeat. With All 4 One, you can tether yourself to another player by tapping Triangle, which means the less skillful participant(s) can follow another’s lead without having to communicate anything. It works perfectly.

In fact, All 4 One managed to avoid co-op frustration until the game’s slightly-too-long campaign starts to near its conclusion, where an increase in challenge is achieved through endless waves of repetitive, powerful enemies. Suddenly, ammunition management becomes a real worry, and progression becomes a cycle of moving from room to room and holding down the R1 button until stuff stops blowing up. This goes on for hours, transforming combat from wild (in mostly a good way) to tedious and grindy.

Perhaps more of an affront to traditional Ratchet & Clank fans is how weapon choice means far less in All 4 One. Besides how upgrading has been relegated to store purchases rather than rewards for actual use, it doesn't really matter which weapon you're picking so long as it's firing, and the game strongly emphasizes players picking the same weapon, which causes damage multipliers when fired at once. Sure, some weapons are more powerful than others, but the end result usually means two or more people firing the same thing at the same dude, rather than picking the "right" weapon. Enemies don't require much strategy in All 4 One. Especially towards the end, crowd control demands the game boil down to endlessly cycling between rockets and grenades. Yawn.

Somewhere else, this might not be a big deal, but in a Ratchet & Clank game, it just feels...off.

Ratchet & Clank with multiplayer works--mostly. Unfortunately, the emphasis on chaos over control doesn’t always favor fun, which means multiplayer thrill seekers are left with a sometimes unsatisfying experience and Rachet & Clank diehards may want to think about replaying an already released game to get their fix. 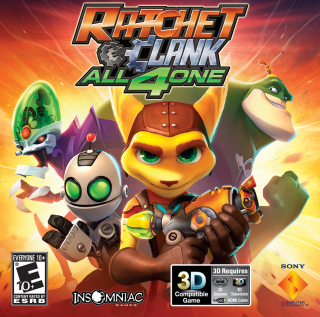