by Alex Navarro on September 4, 2013
Share:TwitterFacebookReddit

Everything you loved about Rayman Origins is polished to a glistening sheen in this tremendously fun platformer.

Not enough people played Rayman Origins. I mean, yeah, lots of people played it, but it's honestly one of those games that I think just about everyone should play. Its deft mixture of challenging platforming gameplay, gorgeous artwork, and a silly sensibility combined to form one of the most genuinely pleasing games of the last several years. Maybe more people will play its newly released sequel, Rayman Legends. They certainly ought to, since it improves upon Origins' design in just about every meaningful way (and happens to be available for just about every currently supported platform).

Legends quickly builds on Origins' framework by introducing Rayman and his cadre of weirdo friends to a new adventure full of adorable peril. Teensies (little blue people with humongous noses) are being kidnapped, and it's up to you to rescue them as you jump, fly, swim, and dash through dozens of different levels, split across several worlds. Each world is unlocked as you collect more and more teensies in each level, which are often stashed behind secret doors or other level sections off the beaten path.

Not that there's a great deal of room for exploration in Rayman Legends, but there doesn't really need to be, either. This is a quick-paced 2D platformer, geared toward fast, but precise traversal of all sorts of pitfalls, traps, and enemies of varying difficulty. Like Origins, Legends is a game best described as "challenging," rather than "hard." Early on, the game's absolutely breezy, but by the second or third world, tougher and tougher challenges await, including some tricky boss fights, and a number of specialized levels geared toward touch-screen mechanics as well as rhythmic inclination.

First, those touch-screen levels. In these sections, control of the character on-screen is wrested away from the single player, and you instead find yourself tapping, swiping, and jabbing at the screen on either your Wii U or Vita. You do these motions to remove traps, adjust platforms, and even distract enemies as the AI character on screen presses forward, attacking and jumping where needed. Most of the time, this works pretty well. The AI can occasionally bug out and make an idiotic jump to their death, and there are moments on both platforms where the touch-screen doesn't immediately do what you want it to. It's also worth noting that the non-touch-screen-oriented platforms (like the Xbox 360 and PS3) replace these mechanics with simple button presses on the controller.

You can mitigate that AI issue by playing with friends (the Wii U version supports up to five players, while the other console and PC versions support four), though co-op comes with its own set of challenges--namely, the chaos of many characters occupying the tight, periodically confusing spaces of the game's levels. Still, even with that occasional chaos, Legends is a ton of fun with other players, and its easy drop-in/drop-out setup makes it a breeze for people to join.

Even with occasional AI quirks, I often found the touch-screen sections quite creative and nearly as much fun as the traditional platforming levels. The pace doesn't slow down much when you're swiping and tapping versus running and jumping, and the game's solid enough with checkpoints to ensure you aren't repeating too many sections over and over. That becomes key late in the game, when the challenge really ramps up. Yes, there will be sections you play again and again that will most certainly frustrate you, but I actually found there to be less of those moments than in Origins, which redlined toward the end and didn't really let up once it got there.

There's ample variety throughout the game, as well. In addition to those touch-screen levels, there are also musical levels, which are essentially chases set to goofy music that require the player to time all their movements to the rhythms of the song. It sounds a lot harder than it actually is. If you've got a decent ear for music, you'll probably blow through them pretty easily, even toward the end. Elsewhere, there are levels from Rayman Origins that have been remixed for the purposes of this game, a variety of unlockable challenge levels, and "invasion" levels, which are timed runs of remixed, completed Legends levels.

Apparently, those invasion levels are missing from the Vita game, which is unfortunate, but not exactly a version killer. As it happens, those invasion levels are fun, but not exactly the major highlight of the game, and the Vita release is otherwise a fantastic version. Yes, Legends certainly looks best when its gorgeous 2D art is blown up on an HDTV screen, but the Vita version displays the game's art design extremely well, and has that added benefit of being entirely portable.

Above all else, Rayman Legends is just charming as hell. Origins was too, but Legends takes many of the best elements of Origins--its beautiful visuals, accessible controls, clever level designs, and goofily catchy music--and improves upon just about every one of them. Origins had the distinction of being one of the best-looking, best-playing 2D platformers of this generation, and Legends somehow manages to be even more masterful in its execution. This is one of those games that's so terrifically crafted, so effervescently energetic, so beautifully, colorfully drawn, that it's genuinely difficult to come up with legitimate caveats to possibly dissuade anyone from it.

So I won't even try. Just play Rayman Legends. You won't regret it. 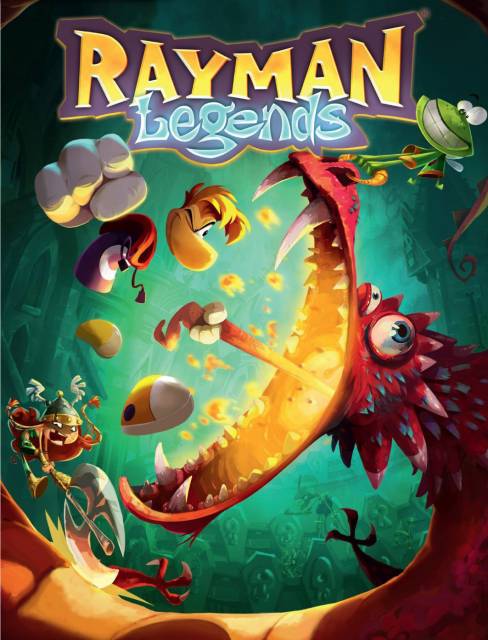