by Brad Shoemaker on June 1, 2011
Share:TwitterFacebookReddit

Red Faction: Armageddon marginalizes, or outright ignores, some of the best qualities of its predecessor, the gleefully destructive Marsbox Red Faction: Guerilla. In place of that game's open world and its boundless opportunities for completely wrecking everything in sight, Armageddon constrains your freedom to an unflinchingly linear corridor crawl. The destructible environments are still here, but they're largely reduced to window dressing, except when they're actively getting in the way of your progress. There's a handful of neat weapons and vehicle sequences over the course of the campaign, but they aren't enough to redeem Armageddon's functional but bland and often repetitive third-person shooting.

The game casts you as scrappy, bald gun-for-hire Darius Mason, a descendant of Guerilla's revolutionary hero Alec Mason. But instead of an evil interplanetary corporation, you're up against...giant space bugs. Mason unwittingly releases a Mars-wide infestation of creepy crawlies at the behest of some crazy cultists, then spends the rest of the game fighting endless numbers of the bugs (and the occasional cultist) to squelch the outbreak and restore some semblance of order to Mars. There are a few attempts to connect this game up to the existing Red Faction back story--with the appearance of the last game's amazing sledgehammer, and references to the EDF and the deranged scientist Capek, for example--but otherwise, this game could be shoehorned into any franchise that accommodates the act of shooting at monsters with futuristic weaponry.

An early-game environmental disaster drives the human populace underground, so you'll spend the majority of the game fighting the same monsters ad nauseam in seemingly endless subterranean cave systems and industrial complexes. The shooting itself feels fine; it's just that two or three hours of doing it over and over reveals how unthreatening and rote the enemies' behavior is, removing any sense of danger or tension as you move into new combat scenarios. The handful of enemy types generally either cling to walls and shoot at you, or charge straight at you on the ground, and some careful observation will reveal them basically doing the exact things over and over, to the point that the wall-hangers will actually jump between the same points on the walls repeatedly. The hours and hours of combat are broken up by a few superficial and highly destructive vehicle sequences that are fun for a few minutes but really don't give you much more than a brief arcade thrill.

It's too bad the enemies aren't a stiffer and more dynamic challenge, because a few of the game's weapons are pretty good. The clear standout is the magnet gun, which lets you attach one node to an enemy or breakable surface, then a second node anywhere else, causing whatever the first node is stuck on to rocket toward the second node and go splat. The singularity launcher is also satisfying, as it creates a little gravity well that causes everything--enemies and scenery alike--to swirl around in the air for a few seconds before it explodes and does huge damage.

Both of these weapons, and more mundane destructive implements like a rocket launcher, can also be used to take apart structures the game designates as breakable. Tearing down buildings with abandon can be a lot of fun--that was inarguably the cornerstone of Guerrilla, in fact--but outside the rare objective to take down an infested building, Armageddon doesn't give you a lot of reasons, or even opportunities, to meaningfully destroy things. There are plenty of cases where you and some of the burlier enemies will actually end up destroying sets of stairs and walkways that you need to traverse to get to the next objective, and while the game arms you with a handheld device that can restore destroyed surfaces to their original state, it gets to be a chore rebuilding the level around you repeatedly just so you can move on. That repair device trips a glowing visual effect that looks neat the first few times you use it, but ultimately this mechanic doesn't add much to the campaign.

Armageddon lacks any sort of competitive multiplayer, but it's got Infestation, a wave-based survival mode for four players that's reasonably entertaining if you haven't burned out on the combat in the campaign yet. The nicest thing about Infestation is that the currency you earn there--and you earn it a lot faster than in the story--can be carried back over to your character for campaign play. So there's a good incentive to take a break from the single-player and boost your upgrades before you resume fighting for the salvation of Mars. But since the look and feel of the combat, enemies, and maps in Infestation are identical to that of the campaign, I had no desire to keep playing the multiplayer once I'd finished the story. There's also a timed Ruin mode for players who buy the game new. This one lets you destroy small maps under a time limit for maximum score, but the score requirements here are so stringent that it's not much fun to actually try to unlock each subsequent map (though there is a free mode that lets you truly run amok).

There's nothing wrong with a good linear third-person shooter, but Red Faction: Armageddon is merely a passable one. Its mechanics are sound but its design uninspired, failing to do any one thing better than the standout entries in the genre. And the few unique tricks it does have, its predecessor did better. After Guerrilla made such a resounding impact, it's a shame that the best you can say about this latest Red Faction is that it's just OK. 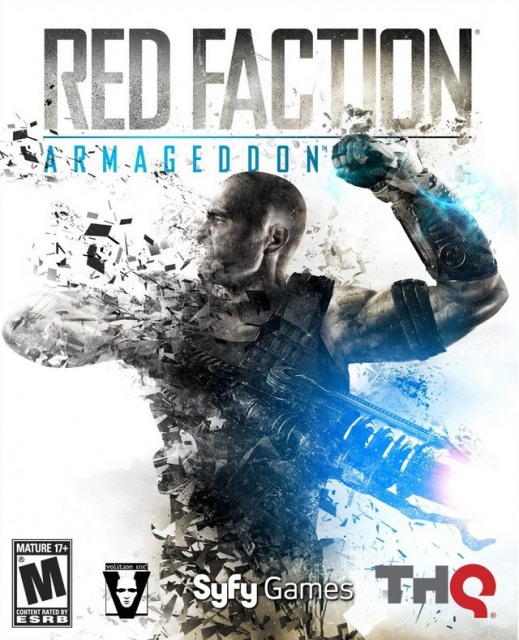