by Jeff Gerstmann on June 9, 2009
Share:TwitterFacebookReddit


A healthy dose of satisfying destruction can really go a long way. In this case, the ability to destroy raises Red Faction: Guerrilla up from being a fairly standard open-world game with plain-jane missions and scattered optional tasks into something really special. When you round it out with an interesting Martian theme and factor in the game's solid multiplayer, the end result comes out feeling mostly great.

Guerrilla is the third game in the Red Faction line, and it's the first one to be released in quite some time. It opens with you, as miner Alec Mason, arriving on Mars to see your brother and put in some good, honest work. Before too long, your brother is dead and you've been sucked into a brewing rebellion with the rest of the Red Faction. The reds are fighting against the EDF--that's the Earth Defense Force--who seems to be pretty good at oppressing the labor class on Mars. Seeing as how they just gunned down your brother and you've narrowly avoided being their next victim, you quickly join up and start taking on tasks to slowly disrupt the EDF's control.

That control is region-based, with each region of Mars offering a number of tasks that can lower the level of control that the EDF has over a sector while also raising the morale of the people, inspiring them to fight at your side should you find yourself in a public battle. The control level is what gets you to accomplish side tasks, as you won't be able to liberate a region without first lowering the level of control below a certain threshold. Doing so unlocks the final mission for a region, which liberates it and moves the story forward to a new area. Most of the story missions are straightforward, though some of the longer ones start slow and end frantically. While the longer missions provide checkpoints, there were a couple of cases where I wished they had one a little closer to the tricky part.

The side missions in Red Faction: Guerrilla are broken up into categories, and each area has a few of each type. For me, the most interesting and fun missions were the ones where you ride around in a turret on the back of a car and have to destroy a bunch of EDF property while protecting your vehicle from damage. This one's great because it plays right into the game's destructive strengths. Others, like having to drive a car from point A to point B before time expires, or another that has you rescuing hostages from trigger-happy troops and returning them to safety, are decidedly less exciting. Here's another note for you completists out there. Upon finishing the 20 main story missions, the game dumps you back into the world and lets you clean up any remaining business, like side missions or finding collectibles. But it also makes many of those remaining missions harder than they would be normally. So you'll have an easier time if you completely clear out each sector one by one before liberating them.

Even though a lot of the single-player stuff in Red Faction: Guerrilla sounds a little boilerplate on its own, the end result is still a fairly exciting campaign. You'll purchase enough weapons and upgrades along the way to keep the new stuff coming, and there are enough side mission types around that you're almost guaranteed to enjoy at least one of them--and you don't need to do too many of them before unlocking an area's final mission. So it rarely feels like you're grinding it out just to move on. The weapons are satisfying and, well, you blow up tons of buildings along the way. It's the inclusion of a robust physics model that makes destroying structures so much fun. Everything behaves roughly as you'd expect, so taking out key points of a bridge's foundation, for example, is much more effective than just grabbing your hammer and punching random holes in the bridge itself. Seeing buildings collapse and watching smokestacks crumble, often falling onto other structures on their way down, is the game's most exciting feature.

Blowing things up is a key component of the game's offline multiplayer, a pass-and-play mode called wrecking crew. There are multiple minigames to play here, and all of them are centered on you taking one weapon into a small cluster of buildings and blowing them apart. Some give you limited time to blow up as much as possible, others give you limited ammo to force you to make every shot do as much damage as possible, and so on. It's a great showpiece for the game's destructible structures.

There's also a full-on competitive online multiplayer mode with Halo-style matchmaking. I'm of the mind that most open-world games that have tried to include competitive multiplayer haven't really worked out so well, so I have to admit that I was pretty surprised by Red Faction: Guerrilla. The multiplayer strips away the open world of the single-player in favor of tighter, more focused maps. The weapons from the single-player appear in some form, and you can also wear various backpacks that give you special abilities. The jet pack from the single-player game appears, as well as things like a vision pack that lets you see enemies through walls. Or a fleetfoot pack that makes you run super-fast when triggered. Or a stealth pack that makes you mostly invisible for short periods of time. I especially enjoyed the rhino pack, which unleashes a powerful forward charge when triggered, busting through walls in the process. The weapons, backpacks, and demolition-friendly buildings make the multiplayer modes--a mostly standard set of deathmatch, capture the flag, and other objective-based options--a lot of fun. The game also gives you a steady stream of unlockable characters and other objects as you gain online experience.

While there are clunky bits at the fringes of Red Faction: Guerrilla that give it a handful of frustrating or disappointing moments, the core moments of the game are exciting and well-conceived. Factor in a thrilling multiplayer component and the sheer satisfaction provided by the wholesale destruction of huge structures and you've got more than enough reasons to get your ass to Mars.
Jeff Gerstmann on Google+
Load Comments 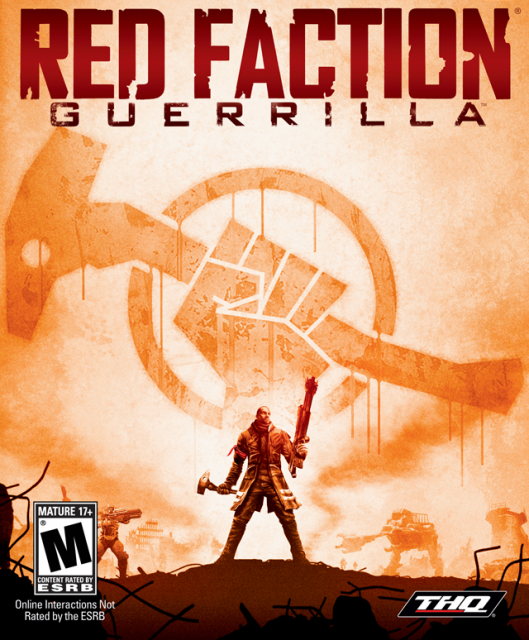