by Alex Navarro on February 22, 2012
Share:TwitterFacebookReddit

Rhythm Heaven Fever's catchy tunes and surprisingly varied two-button gameplay combine into an experience that's as wonderfully silly as it is frequently challenging.

One gets the impression that Nintendo has never been quite sure what to do with Rhythm Heaven (or Rhythm Tengoku, in Japan). Unlike their less-musical equivalent, the WarioWare series, these rhythmic minigame collections have no ubiquitous mascot character to help market the inherent weirdness within. Without that crutch, it becomes difficult to explain to all but the most Japanese-enthusiastic audience exactly what the hell is going on in any of these games. Bizarre music plays in time with even more bizarre visual scenarios, and the gameplay often revolves around just a couple of different commands over the course of the entire game. It's not a game of which the appeal can easily be summed up in a TV commercial--at least in this country.

But that's what makes this franchise, and this latest entry, Rhythm Heaven Fever for the Wii, so fantastic. These games are so fundamentally bonkers that even if you've played the other entries in the franchise, you'll still feel like you're getting a fresh experience each time around. The minigames collected in Rhythm Heaven Fever may only revolve around a couple of variances on pressing the A and B buttons on the Wii Remote in time with the music, but somehow, be it through the transcendentally insane visual presentation that comes along with it, or the undeniably catchy rhythms inherent to the music, each game feels wholly unique, and almost always is a bunch of fun to play.

There are a bit more than 50 new minigames in Rhythm Heaven Fever, each only lasting a minute or two, but with incentives to play them again and again. Trying to get into specific examples of what each game does would be pointless, as they all revolve around the same core theme: press the A, B, or A and B buttons in time to the musical cues played out on-screen.

That sounds deceptively simple, but the rhythms employed in Rhythm Heaven Fever are often tricky, off-time, and full of stunts and pauses that are guaranteed to trip you up at various points. Yes, you're just pressing a pair of buttons in different combinations, but the timing requires precision, and a specific ear that can pick out the patterns within the musical composition. Each game is trickier than the last, of course, ensuring that by the time you get to the last few minigames, you'll either be an expert rhythm maker or hopelessly out of your depth.

Odds are greater on the former than the latter, as Rhythm Heaven Fever's progression is geared toward helping those hopelessly arrhythmic clods who couldn't keep a 4/4 beat if someone put a gun to their head. Four minigames are assigned to a specific set, or level, with a fifth game--a "remix" version of the four previous minigames combined into a single song--rounding out each tier. Should you find yourself hopelessly beaten down by one particular game or another, the developers were kind enough to provide you a skip option so that you might move on. The trick is that you'll have to fail several times before it pops up, meaning players who just want to skip from game to game because they're terrible at everything won't have that option until they've failed repeatedly and spectacularly.

Again, it would be pointless to try to run down the different minigame scenarios for you, because they all dart about in so many wild directions that it would essentially amount to me trying to describe each individual game specifically, since no two are exactly alike. They're similar in action, of course, but the scenarios include everything from musical pro-wrestling promo cuts, to one of the least "gangsta" rap video shoots since David Faustino made an album. Some of these are so completely out-there that even Nintendo's localization team seems to have thrown its hands up in surrender at a few different points, opting to just have characters describe the action as, "Hey! Let's do that thing we do! Yeah, that thing we do is great!" I don't remember the specifics of that one, but I believe it involved sentient tuning forks hitting their heads against each other's asses to power a zeppelin.

It's all done with a cute, if utterly strange cartoon art style that translates surprisingly well from the series' traditionally handheld roots. The music is also tremendously good, boasting some of the most inexplicably infectious songs of any game in the franchise. Stylistically, they run the gamut from goofy bossa nova to industrial-sounding pop music, though all of it sounds like it's been filtered through an old Casio keyboard--and I don't mean that insultingly. I've had at least a few of the songs stuck in my head on repeat for the last week, and based on conversations I've had with others who have played it that mostly consisted of them repeating the game's nonsense lyrics back at me, I'm not alone.

It'd be nice if the tutorials for each game could be accessed separately from the main game, and that you didn't have to wait for the tutorial to load up so you can skip it each time you play. The unlockables and bonus bric-a-brac aren't especially great either. But those niggles aside, Rhythm Heaven Fever offers up no shortage of replayability purely on the merits of how much fun these games are. The two-player mode is a nice bonus as well, that will certainly keep those with friends and family around busy for a good bit. But even if you're strictly playing solo, Rhythm Heaven Fever is one of those games that begs to be replayed solely on the basis of its content, and how completely, peculiarly awesome it is. This is a great game at a great price for a console currently gasping gravely for games. If your Wii is still plugged into a TV-like device, Rhythm Heaven Fever is a game that demands your attention. 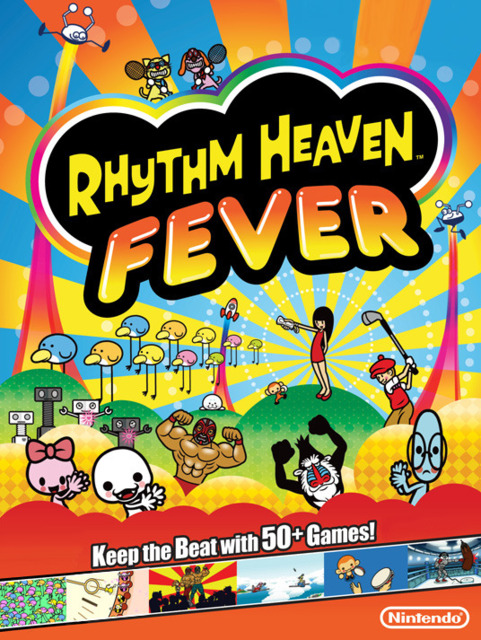