by Jeff Gerstmann on March 27, 2012
Share:TwitterFacebookReddit

The Vita version of Ridge Racer is light on content, and the vast majority of what's actually here has appeared in previous Ridge Racer games.

The best thing you can say about Ridge Racer on the Vita is that if you buy it digitally, it's $25. But even at that lower-than-average price, Namco's latest feels like a con. It has a criminally low number of courses that have all appeared in previous Ridge Racer games, no interesting career structure whatsoever, a new car customizing feature that somehow manages to make the "machines" feel less unique, and a bunch of music that also appeared in the old games. You'd have to be extremely hard up for any form of ridge racing for this to add up to something worth purchasing.

OK, very quickly, let's go over what Ridge Racer is for people that might not have played it before. It's a driving game with an emphasis on drifting around sharp corners, but it has a handling model that automatically takes over most of the steering when you drift, so as long as your tires are squealing, the game will automatically whip you around corners with little input from the player. Much of the game, then, turns into properly timing the release of the accelerator, which causes you to lose traction and start a drift. Then you must attempt to correct your course as soon as possible once the turn is complete, so you can regain traction and start properly accelerating. It feels nothing like real driving and it's a system that probably made a lot of sense when the franchise debuted in arcades back around 1993. These days, with racing games becoming both more realistic and more nuanced, whether they're attempting to simulate real driving or not, Namco's franchise feels like a relic. That's not inherently good or bad--I actually quite like Ridge Racer's core tenets of "Always Be Drifting" and "If You Have To Hit The Brakes, You're Doing It Wrong." But you should know that it's a very specific flavor of driving that will probably baffle newer players.

On the Vita, Ridge Racer doesn't stray far from its past. In fact, an overwhelming majority of the available content is ripped right out of previous Ridge Racer games, from the PSP and PS3 releases. The tracks are old, most of the music came out of a previous Ridge Racer game, and the car design is, well, directly in line with what you'd expect from previous games in the series. It's one thing to evoke a sense of Ridge Racer's past, but much like many of the recent Ridge Racer releases, this Vita version simply lifts things from the other games and dumps them on you again. So even at its relatively low price, this doesn't feel like a good deal. It's worth noting that the US version of the game comes with a "gold pass" for a limited time that gives you access to a handful of DLC add-ons for free, but these extra tracks are also old, and the additional music and vehicles you can acquire this way don't really add much to the overall package.

It's a shame that the content is totally lacking, because there's a trim, but effective set of options in the game that show that at least someone on the development is thinking about the future of Ridge Racer. Rather than dragging you into a huge list of single-player events that form some sort of career mode, Ridge Racer gives you access to everything right away. You can set up spot races that pit you against the traditional collection of AI racers, but the main bit of Ridge Racer is the ability to download ghosts of other human racers and attempt to beat their times. If you do, you can upload your ghost back to the server, letting other players take you on. There's also an interesting, but sort of half-baked team system that has you pick one of four teams when you first start. A daily mission system lets you know which of the other teams are your direct enemies on that specific day, giving you an incentive to seek out ghosts from those opposing teams. The game also has direct online play, allowing up to eight players to unite over the Internet and race on the same anemic selection of tracks again and again. This is another way to gain victories over the opposing teams. But those victories don't reliably funnel into more funds for upgrades or anything, so it doesn't feel like there's enough of a payoff for jumping through the hoops and fighting the right players.

The upgrade system is a flowchart of annoying boxes that let you change the way nitrous works on your car at first, but eventually you can get slipstream add-ons and other abilities. This is where the now-standard Ridge Racer systems like Flex Nitrous and Ultimate Charge come into play. You can equip three upgrades at once, but each upgrade is tagged to one of three groups, and you can only equip one from each group. This, presumably, is how the developers hope to maintain some sort of balance in the system. It's fine, but the upgrade tree is saddled with lame hints that must be paid for and unlocked before you can advance along the tree and get actual upgrades for your vehicles. Also, with the upgrade system and a slider that lets you make any car a "mild" or "dynamic" drifting car, the differences between vehicles are essentially nonexistent. Given the past of unlocking various special cars with unique abilities, this manages to make all the cars feel a little plain.

Visually, the game looks decent, with a frame rate that's smooth enough to convey a solid sense of speed. There's also a nice depth-of-field effect in place that makes distant objects appropriately blurry. But that's still not enough to make this feel like a worthwhile package. As a fan of Ridge Racer, the way the past few games have just rehashed existing track designs is borderline offensive. Packing up an even smaller list of old content and selling it at a "discount" price doesn't make this Vita version any better. I suppose there's a case to be made that lapsed Ridge Racer fans who haven't seen these tracks a million times already might find the Vita release to be more appealing, but... that's a pretty narrow group. 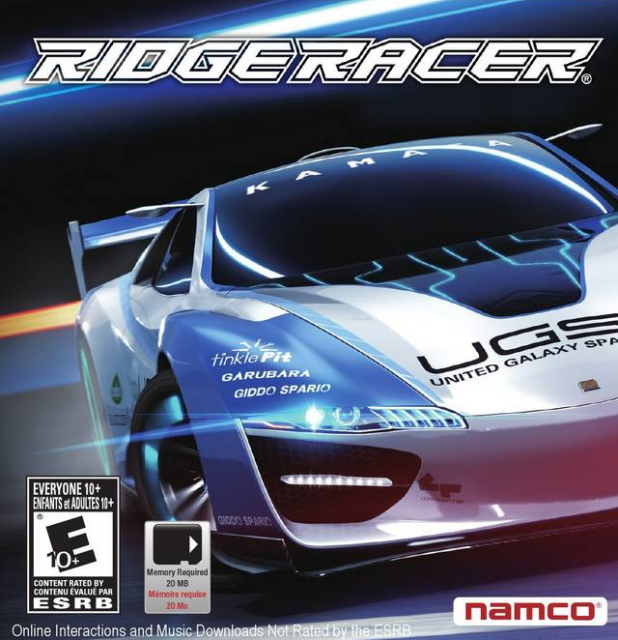